ALBUQUERQUE, N.M. —The Sierra went down over the Arctic Ocean, about 60 miles from the northernmost tip of North America. One moment the unmanned aerial vehicle (UAV) with its 20-foot wingspan was up in the sky, gathering “hard” data over frozen terrain to help climate scientists in comfortable offices make predictions about climate change. The next moment, the little aircraft was gone. 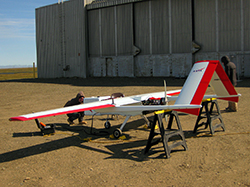 “Just as I walked into the ground control station,” said Darin Desilets, a Sandia researcher at the barren U.S. Air Force outpost known as Oliktok Point, “a gentleman from NASA was calling in to air traffic controllers in Deadhorse, ‘Flight terminated.’” Deadhorse is a nearby settlement on Alaska’s North Slope.

The Sierra’s mission was focused on monitoring something called “the sea/ice margin,” where the solid ice of the frozen north thaws into open sea. This line moves with the seasons and changes each year.

But because of its early and unexpected demise on July 26, the achievements that could be inscribed on Sierra’s watery tombstone are mainly bureaucratic: It was the first civilian UAV to be granted a reserved altitude to fly safely from restricted to open air space and the first to be allowed by the Federal Aviation Administration to use ground radar for sensing and avoidance, making it easier for later UAVs to achieve the same benefits.

Its epitaph might read: It did not require a long runway.

As for Sandia personnel who monitor the windswept site in six-week sessions, their tasks are similarly unsung: They keep equipment running, help translate flight plans into NOTAMS (Notices to Airmen), ensure correct information is broadcast about activation or deactivation of the restricted area and help resolve potential conflicts with local aviation organizations over airspace use. (For more on Sandia’s work in this region, click here.)

So why are these men bivouacked in such an inhospitable place that polar bears make even jogging an unlikely human activity?

The purpose of the Oliktok Point site is to conduct extensive airborne mapping. The result is data used to check the accuracy of satellite‐derived sea-surface temperatures and sea-ice data sets currently used in supercomputer simulations of Earth’s climate.

“People who run climate simulations don’t think about how difficult it is to get the data their supercomputers use,” said Desilets, “but they need that data to develop or even validate how the climate system works.”

It requires repeated visits to locations within the drifting ice packs, observing over many weeks to assess how specific areas evolve over the summer.

The ground control station for climate-monitoring UAVs is at Oliktok Point, the northernmost point of oil-rich Prudhoe Bay. The station consists of a series of well-insulated but otherwise unexceptional trailers from the 1950s that provide living quarters for researchers. The site’s other feature is an aging hangar to house the UAVs, along with land-based monitoring equipment assembled to detect features such as cloud height, incoming and outgoing radiation and other factors of climatological interest. The facility is used by Sandia to provide a launching point to restricted air space for scientific experiments. 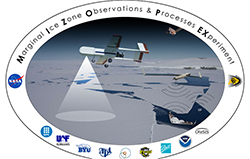 The Sierra, featured in the logo above, was an exploratory UAV in the Marginal Ice Zone Observations and Processes Experiment (MIZOPEX), a NASA-funded research project headed by the University of Colorado at Boulder to explore changing Arctic conditions. Sandia worked with the FAA to provide access to otherwise restricted Arctic airspace for the project. (Design by Tia Crocker and Ian Crocker) Click on the logo for a high-resolution image.

Oliktok Point, as inaccessible as it is, has the infrastructure to support the frigid research. Oil companies that lease the peninsula require visitors to be badged to use the roads and have limited interest in supporting climate research, but their strong financial presence means forklifts and other equipment can be leased in Deadhorse and there’s an airport on the Arctic Ocean with several flights a day. “Try doing our work somewhere else,” Desilets said.

“This event underscores just why unmanned aircraft are so important in the Arctic,” said Desilets. “The real catastrophe would be to have a manned aircraft go down on the ice or, worse, in that almost 0 degree C water.”

“Lessons learned from the Sierra flight helped set the stage for many successful UAS [Unmanned Aerial System] flights that followed,” said Ivey. “The DataHawk (University of Colorado) and ScanEagle (University of Alaska-Fairbanks) flew for about three weeks in late July and early August.”

Sierra is an acronym for Sensor Integrated Environmental Remote Research Aircraft. The small machine was designed by the U.S. Naval Research Laboratory and developed at NASA’s Ames Research Center in Moffett Field, Calif., to perform remote sensing and atmospheric sampling in isolated and often inaccessible regions.