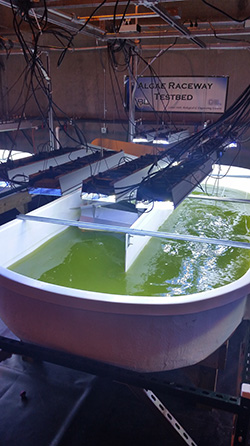 The new algae raceway testing facility at Sandia National Laboratories will help scientists advance laboratory research to real-world applications. Shown here is one of the three 1,000-liter ponds, outfitted with custom lighting and 24-hour advanced hyper spectral monitoring. (Photo by Dino Vournas) Click on the thumbnail for a high-resolution image.

LIVERMORE, Calif.— In a twist of geometry, an oval can make a line. The new algae raceway testing facility at Sandia National Laboratories may be oval in shape, but it paves a direct path between laboratory research and solving the demand for clean energy.

As the nation and California adopt policies to promote clean transportation fuels, that path could help bring the promise of algal biofuels closer to reality. As one of the fastest growing organisms on the planet, algae are an ideal source of biomass, but researchers have not yet found a cost-competitive way to use algae for fuels.

“This facility helps bridge the gap from the lab to the real world by giving us an environmentally controlled raceway that we can monitor to test and fine tune discoveries,” said Ben Wu, Sandia’s Biomass Science and Conversion Technology manager.

“The success of moving technologies from a research lab to large outdoor facilities is tenuous. The scale-up from flask to a 150,000-liter outdoor raceway pond is just too big.”

Several ongoing projects will use the algae raceway right away. Researchers Todd Lane and Anne Ruffing will test genetically modified algae strains as part of a project funded by Sandia’s Laboratory Directed Research and Development (LDRD) program. The algae raceway will allow the researchers to more quickly identify strains that promise improved performance.

Lane is also part of a project partnership with Lawrence Livermore National Laboratory funded by the Department of Energy’s Bioenergy Technologies Office (BETO) that is investigating a probiotic approach to algae crop protection.

Another BETO project seeks to convert algae proteins into useful chemical compounds such as butanol. Wu expects the facility will expand opportunities for Sandia researchers to develop algae as a robust source of biofuels and increase collaborations and partnerships with the private sector, particularly in California where efforts to transform transportation energy are prevalent.

“The bioeconomy is gaining momentum,” he said. “Biofuels from algae may be further off, but algae has sugar and proteins that can make fuel or higher valued products, such as butanol or nylon — products that currently come from fossil fuels.”