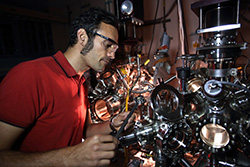 Their work focuses on understanding the oxidation chemistry of organic carbon species critical to many processes including controlling emissions of toxic combustion byproducts to reduce climate change brought on by humans. Researchers expect this to work to benefit geosciences, astrophysics and energy applications.

Their research was published in the July 2016 issue of the Proceedings of the National Academy of Sciences in a paper titled, “Formation and emission of large furans and oxygenated hydrocarbons from flames.” The paper is co-authored by Johansson and Sandia researchers Hope A. Michelsen, Paul E. Schrader, Matthew F. Campbell and Farid El Gabaly; Tyler Dillstrom, and Angela Violi of the University of Michigan; Matteo Monti of Stanford University; and Denisia M. Popolan-Vaida, Nicole K. Richards-Henderson and Kevin R. Wilson of Lawrence Berkeley National Laboratory.

Oxygenated hydrocarbons are molecules that contain oxygen in addition to carbon, hydrogen and various other elements present during combustion. Many of these molecules are toxic pollutants. The molecules may influence cloud formation and have a significant climate impact if they end up on soot particles released from combustion sources. 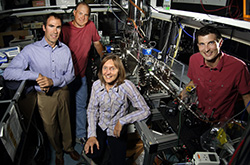 Sandia National Laboratories researchers from left to right, Olof Johansson, Paul E. Schrader, Hope A. Michelsen and Matthew F. Campbell are developing the understanding necessary to build cleaner combustion technologies that will in turn reduce climate impact. (Photo by Dino Vournas) Click on the thumbnail for a high-resolution image.

Johansson says there are many significant studies on these species, but the precise chemical formation pathways and their links to carcinogenic polycyclic aromatic hydrocarbon (PAH) molecules are unknown.

“We show that oxygen adds to PAH molecules via reactions that involve OH and O2 to generate these large oxygenated hydrocarbons,” Johansson said. “The molecular sites where oxygen is added are targets for additional reactions that can lead to formation of a five-member ring containing four carbon atoms and an oxygen atom, which is known as a furan.”

Furans are particularly toxic and carcinogenic. The work shows that furans are the main group of large oxygenated molecules formed during combustion.

Combustion sources of furans include biomass burning, cigarette and pipe smoke, waste incineration, electronic waste recycling and volcanic activity. Previous studies have shown that soot’s ability to absorb and hold water is greatly enhanced by the presence of oxygen on the surface of soot particles. Understanding how oxygen becomes incorporated into PAH species and soot particles during combustion is a key step in designing technology that can mitigate the release of large oxygenated hydrocarbons.

Sandia researcher Hope Michelsen says understanding the mechanisms leading to formation and destruction of hazardous combustion byproducts is the key to controlling their formation and emission.

“Soot particles have a very short life cycle in the atmosphere compared to greenhouse gases, such as carbon dioxide and methane,” Michelsen said. “Still, soot particles are projected to be second only to carbon dioxide when it comes to anthropogenic climate impact. Hence, developing the understanding necessary to build cleaner combustion technologies that reduce the climate impact of soot would have almost immediate effects.”

The present work is intended to provide a guidebook to the oxygen chemistry and importance of different oxygenated functional groups. The work may assist other researchers in interpreting data from soot measurements by providing the masses of oxygenated species formed during different combustion conditions. The current work might also aid in designing new experiments as it provides information on molecular structures.

“Hopefully our work will spark new ideas among our colleagues,” Johansson said. “One important outcome of the present study, which we think may advance the work done at the CRF, is that large oxygenated species need to be considered for the hydrocarbon growth chemistry under many combustion conditions.”

The present research can be viewed as a continuation of the work performed by Sandia researcher Craig Taatjes and his colleagues when they were the first combustion scientists to detect small enols in flames.

“Our work shows that enols larger than those Taatjes and colleagues were able to detect play an important role as intermediate species on the chemical route toward furans,” Johansson said.

One of the most intriguing challenges of this research is laying out the transition from gas-phase molecules to solid particles as they first form in a combustion environment, he said.

“Measurements in combustors are very difficult because there are few diagnostic techniques that do not perturb the combustion chemistry, and the techniques available do not provide all of the necessary information,” Johansson said. “Implementation and interpretation of experiments can be challenging. Modeling, on the other hand, is also challenging because the combustion systems are large and complex. Using a close combination of measurements and modeling allowed us to uncover new chemical mechanisms.”