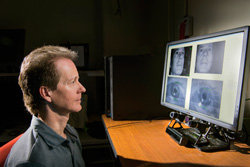 Sandia National Laboratories researcher Mike Haass demonstrates how an eye tracker under a computer monitor is calibrated to capture his eye movements on the screen. Haass and others are working on the technology with EyeTracking Inc. (Photo by Randy Montoya) Click on the thumbnail for a high-resolution image

The awards will be presented Sept. 14 at the FLC Mid-Continent/Far West regional meeting in Albuquerque.

“We want our technologies commercialized for the public good,” said Jackie Kerby Moore, Sandia’s manager of Technology and Economic Development and the labs’ representative to the FLC. “The FLC awards show that Sandia’s work is getting out there and making a difference.”

The FLC is a nationwide network of more than 300 members that provides a forum to develop strategies and opportunities for linking laboratory mission technologies and expertise with the marketplace.

Where the eye is looking

Eye tracking has been used in labs for years to measure where the eye is looking on a computer screen. The images generally are static, so it’s difficult to measure eye movements in relation to visual stimuli when people interact with dynamic data, then analyze the data to develop models of perceptual and cognitive activity. That’s because the visual cognition research community has lacked software that models how eyes dynamically recalibrate their trajectory when tracking a moving target across a scene.

Sandia’s GazeAppraise software characterizes those smooth-pursuit eye movements, creating a new way to evaluate search strategies and human performance. GazeAppraise will be added to a variety of next-generation hardware and software systems used to improve performance in dynamic image analysis in medical diagnostics, airport security, nuclear nonproliferation and other areas where people work with soft-copy, or digital, images.

“We know a lot about information processing, the physiology and neuroscience of visual processing,” said Laura McNamara, an applied anthropologist at Sandia. “How do we take that and apply it in these highly dynamic and real-world environments?”

Sandia signed a Cooperative Research and Development Agreement (CRADA) in 2015 with EyeTracking Inc. of Solano Beach, California, to work toward commercializing the system. 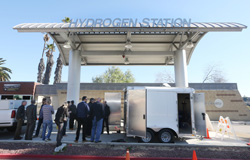 Speeding up the hydrogen highway

Developed by Sandia and the National Renewable Energy Laboratory (NREL), HyStEP reduces the time to commission new stations from as much as months to just one week. HyStEP is funded by the Department of Energy’s Office of Energy Efficiency and Renewable Energy’s Fuel Cell Technologies Office as part of the Hydrogen Fueling Infrastructure Research and Station Technology (H2FIRST) project.

“Industry stakeholders identified station commissioning as a challenge that the national laboratories have the resources to address,” said Joe Pratt, the Sandia H2FIRST project lead. Sandia contracted with Powertech Labs to build the HyStEP device, which was then tested at NREL and is being used by the California Air Resources Board.

FCEVs create no emissions, refuel in less than five minutes and provide a range — upward of 300 miles — on par with gasoline vehicles. Hydrogen FCEVs are on the verge of revolutionizing clean-energy personal transportation. California is the state with the most FCEVs on the road and expects to have 35 operational retail hydrogen stations by the end of 2016. This momentum in clean-energy transportation is fueled by the collaboration between Sandia and NREL on the H2FIRST project, and Sandia’s research expertise in safety, codes and standards for hydrogen technologies.

Micro-channel heat exchangers (MCHE) are an emerging technology that make power generation, refrigeration, refining and many other industrial processes more efficient. Switching to MCHEs can save space, reduce power consumption and increase reliability for high-pressure applications from cryogenic to combustion temperatures.

Until recently, demand for industrial MCHEs has outstripped supply, with large-scale production dependent on a single, non-US manufacturer. Developing a domestic source could reduce costs and increase the supply of MCHEs, allowing more industries to unlock their numerous benefits.

Sandia has worked with Vacuum Process Engineering (VPE) through a CRADA to commercialize this technology. Sandia licensed SEARCH to the Sacramento, California, small business as a foundational capability to design MCHEs to meet each customer’s unique requirements, and supported its certification under the ASME Boiler and Pressure Vessel Code as the first dedicated MCHE original equipment manufacturer. VPE is now producing MCHEs in the U.S. and exporting them to customers worldwide.

“GazeAppraise, HyStEP and SEARCH are great examples of how Sandia’s scientific research translates into products that benefit the public,” said Mary Monson, senior manager of Industry Partnerships at Sandia. “We look forward to working with partners to make these innovations widely available.”