ALBUQUERQUE, N.M. — Two technologies developed at Sandia National Laboratories are among 54 energy projects that will receive nearly $16 million from the U.S. Department of Energy (DOE) to help bring them to market. The projects involve 12 national labs and 52 private-sector partners. 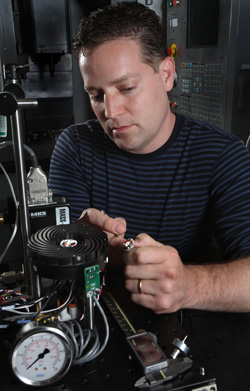 Jeff Koplow of Sandia National Laboratories adjusts a prototype of his Air Bearing Heat Exchanger invention. The technology, known as the Sandia Cooler, significantly reduces the energy needed to cool the processor chips in data centers and large-scale computing environments. The cooler will receive commercialization funding from the Department of Energy Office of Technology Transitions. (Photo by Dino Vournas.) Click on the thumbnail for a high-resolution image.

Funding comes through the Technology Commercialization Fund (TCF) administered by the DOE’s Office of Technology Transitions, which works to expand the commercial impact of the department’s portfolio of research, development, demonstration and deployment activities. In February, the office called for TCF funding proposals from the DOE national labs and received 104 applications in two topic areas:

All projects selected will receive an equal amount of non-federal money to match the federal investment.

“Deploying new clean energy technologies is an essential part of our nation’s effort to lead in the 21st century economy and in the fight against climate change,” said Lynn Orr, DOE’s undersecretary for Science and Energy. “The funds will help to accelerate the commercialization of cutting-edge energy technologies developed in our national labs, making them more widely available to American consumers and businesses.”

Mary Monson, Sandia’s senior manager of industry partnerships, said Sandia looks forward to working with the private sector to commercialize technology. “Tech transfer supports Sandia’s national security mission and strengthens the economy,” she said. “The Technology Commercialization Fund is an exciting program that will bring national laboratory expertise to industry and build the energy sector of the economy.”

At Sandia, efforts to commercialize the Sandia Cooler will receive $168,000 in federal funding; its partner is Wakefield-Vette Thermal Solutions of Pelham, New Hampshire. And High Temperature BA-BZT-BT Capacitors was awarded $50,000 from the fund; its partner is TPL Inc. of Albuquerque.

The Sandia Cooler reduces the energy needed to cool processor chips in data centers and other large-scale computing environments.

In a conventional computer CPU application, the Cooler efficiently transfers heat across a narrow air gap from a stationary base to a rotating finned structure overcoming the stagnant insulating air “blanket” inherent in traditional stationary finned cooling structures.

The cooler offers benefits in other applications where thermal management and energy efficiency are important, such as home appliances and heating, ventilation and air-conditioning systems. The Sandia Cooler architecture can eliminate several additional drawbacks of conventional air-cooled heat exchanger technology, such as fouling and excessive noise.

The technology can also be competitive in cost, simplicity and durability. It won an R&D 100 Award in 2012.

The BA-BZT-BT capacitors project evolved from Sandia’s longstanding work to develop silicon carbide- and gallium nitride-based power electronics that can operate at high temperatures, from 250 to 400 degrees Celsius (about 480 to 750 degrees Fahrenheit). These wide bandgap materials allow electronic systems to operate in harsh environments. To date, there hasn’t been as much research into the complementary passive components of the electronic circuitry.

The Sandia team behind the BA-BZT-BT dielectrics, working with the DOE Office of Electricity, is developing capacitors that can operate in such extreme temperatures. They have shown that common and relatively inexpensive elements can be used to make capacitors with promising performance characteristics. One targeted use is in power conversion systems for grid-tied energy storage. The system would be highly efficient and require no cooling to make the electronics function properly, ultimately leading to better performance and cost savings.

DOE’s national labs have supported critical research and development leading to many technologies in the marketplace today, including the batteries powering electric vehicles, the foundation of internet servers and the optical digital recording technology behind DVDs.

“The great work at the national labs and across DOE’s program make the department one of the largest supporters of technology transfer within the federal government,” said Jetta Wong, director of the Office of Technology Transitions. “These TCF selections will further strengthen those efforts across a broad spectrum of energy technologies and advance DOE’s important mission to transition technologies to the market.”