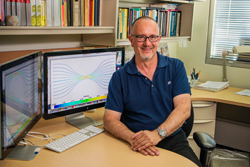 The U.S. Association for Computational Mechanics awarded Sandia National Laboratories researcher Pavel Bochev the Thomas J.R. Hughes Medal for his contributions to the field of computation fluid dynamics. (Photo by Randy Montoya) Click on the thumbnail for a high-resolution image.

The award is given biannually for “outstanding and sustained contributions to the broad field of computation fluid dynamics.”

Finite element methods, known as FEM, are a fundamental modeling and simulation tool for science and engineering problems. FEM’s applications range from examining the integrity of the nuclear stockpile to assessing the vulnerabilities and risks of natural and human systems to climate change.

FEM convert differential equations describing physical phenomena, such as fluid flows and electromagnetism, into algebraic equations that can be solved on a computer. Compatible FEM mimic the mathematical structure of these differential equations and can deliver robust and physically meaningful results. However, they also can be more difficult to implement and solve. Stabilized FEM use simpler, generic finite element definitions. But because approximations are involved, the design of successful elements requires careful analysis of the mathematical properties lost and the most appropriate mechanisms to recover them.

The award was presented at the 14th U.S. National Congress on Computational Mechanics in Montreal in mid-July. The biannual congresses have an average attendance of 1,200 participants, according to a history of the organization available on its website.