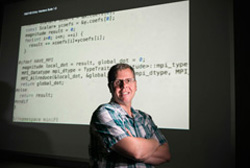 Mike Heroux of Sandia National Laboratories, co-lead of the Federal Laboratory Consortium award-winning Mantevo project, shows the code from the Mantevo miniapp MiniFE. (Photo by Randy Montoya) Click on the thumbnail for a high-resolution image.

The FLC is a nationwide network of more than 300 members that provides the forum to develop strategies and opportunities for linking laboratory mission technologies and expertise with the marketplace.

“We are proud of this work in technology development, technology transfer and partnerships,” said Jackie Kerby Moore, Sandia’s manager of Technology and Economic Development and the labs’ representative to the FLC. “We are truly honored to be recognized, alongside our partners, for our work in these areas.”

Here are details about the four Sandia winners:

“NMSBA has been bringing small businesses together with scientists and engineers from Sandia and Los Alamos national laboratories for 14 years. We are grateful to the principal investigators who work with New Mexico’s small businesses,” Kerby Moore said. “Together they are implementing innovative ideas and stimulating our state’s economy.”

NMSBA was created in 2000 by the state Legislature to bring national laboratory technology and expertise to small businesses, promoting economic development with an emphasis on rural areas. The program has provided 2,195 small companies in all 33 New Mexico counties with more than $39 million worth of research hours and materials. More than 3,500 jobs have been created and retained as a result of NMSBA.

Mantevo is an integrated collection of small software programs, or miniapps, that model the performance of full-scale applications yet require code a fraction of the size. They were designed to improve high-performance computing.

The Mantevo project, which grew out of Laboratory Directed Research and Development and won a 2013 R&D 100 Award, pioneered the miniapp concept. Mantevo Suite 1.0 is the first integrated collection of full-featured miniapps.

Sandia brought the Mantevo miniapps together and made them freely available as an open-source software package. Every major computer vendor and dozens of university research teams use Mantevo to design next-generation systems and tools. The work was done in collaboration with, among others, Los Alamos and Lawrence Livermore national laboratories and Santa Clara-based NVIDIA Corp.

“Things are changing rapidly in the computing industry,” said computer scientist Mike Heroux, Sandia co-lead on the project with Richard Barrett. “It is very satisfying that the work is having an impact on the design and development of new computing systems and applications.”

Nano-stabilized enzymatic membranes for CO2 capture provide a simple, compact and more energy-efficient approach to capture than conventional methods. The process removes 90 percent of the CO2 in emitted gas mixtures and is expected to save the U.S. coal industry alone $90 billion a year.

The enzymatic membrane technology uses computational modeling to design and nanofabrication techniques to synthesize membranes with thin, narrow and airtight liquid layers. By embedding an enzyme that converts CO2 gas into a more soluble form, the liquid-layered membranes efficiently capture CO2 from power plant flue gas. Researchers from Sandia and the University of New Mexico partnered to develop the technology.

“With the growing concern about global warming caused by greenhouse gas emissions, there is an immediate and urgent need for efficient CO2 capture and reuse in other applications such as enhanced oil recovery,” said Sandia nanobiologist Susan Rempe. “It is gratifying to be recognized by the FLC for our team’s efforts to provide a solution to CO2 capture that works within the framework of the U.S. coal industry.” 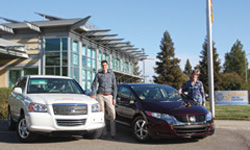 As hydrogen fuel cell vehicles continue to roll out in increasing numbers, the infrastructure for fueling them must expand as well. A project launched by the U.S. Department of Energy and led by Sandia and the National Renewable Energy Laboratory will work in support of H2USA, the public-private partnership introduced in 2013 by the DOE and industry stakeholders to address the challenge of hydrogen infrastructure.

Established by the DOE’s Fuel Cell Technologies Office in the Office of Energy Efficiency and Renewable Energy, the Hydrogen Fueling Infrastructure Research and Station Technology (H2FIRST) project will draw on existing and emerging core abilities at the national labs to reduce the cost and time of new fueling station construction and improve the stations’ availability and reliability. The partners include several agencies from the state of California, widely regarded as the nation’s epicenter of zero-emission vehicles.

The goal is to accelerate and support the widespread deployment of hydrogen fuel cell electric vehicles. Toyota recently announced it will begin selling a fuel cell vehicle in 2015. General Motors and Honda announced plans to jointly develop hydrogen fuel cell cars and Hyundai will lease its version in California.

“The success of hydrogen fuel cell electric vehicles largely depends on more stations being available, including in neighborhoods and at work, so drivers can easily refuel,” said Daniel Dedrick, hydrogen program manager at Sandia. “With H2FIRST, we’re definitely on the road to making that happen more quickly.”