Building a better reactor by modifying its walls

ALBUQUERQUE, N.M. — Machine-learning techniques, best known for teaching self-driving cars to stop at red lights, may soon help researchers around the world improve their control over the most complicated reaction known to science: nuclear fusion. 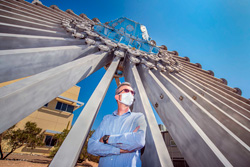 Sandia National Laboratories physicist Aidan Thompson, who champions machine-learning to improve fusion reactors, stands under the shelter of the Sandia “found art” piece titled Starburst. From 1980 to 1986, the structure was the power flow lines and target chamber of the Particle Beam Fusion Accelerator, Sandia’s earliest major fusion attempt. (Photo by Randy Montoya) Click on the thumbnail for a high-resolution image.

Fusion reactions are typically hydrogen atoms heated to form a gaseous cloud called a plasma that releases energy as the particles bang into each other and fuse. Getting these reactions under better control could create huge amounts of environmentally clean energy from nuclear reactors in fusion power plants of the future.

“The connection between machine learning and fusion energy is not obvious,” said Sandia National Laboratories researcher Aidan Thompson, principal investigator for a three-year Department of Energy Office of Science award of $2.2 million annually to make that very connection. “Simply put, we have pioneered machine-learning’s use to improve simulations of the reactor’s wall material as it interacts with plasma. This has been beyond the scope of atomic-scale simulations of the past.”

The expected result should suggest procedural or structural modifications to improve nuclear energy output, he said.

Machine learning is powerful because it uses mathematical and statistical means to figure out a situation, rather than analyze every piece of data in the desired category. For example, only a small number of dog photos are needed to teach a recognition system the concept of “dogginess”— in other words, “this is a dog” — rather than scanning every dog photo in existence.

Sandia’s machine-learning approach to nuclear fusion is the same, but more complicated.

“It is not a trivial problem to physically observe what is going on within a reactor’s walls as these structures are internally bombarded with hydrogen, helium, deuterium and tritium as parts of a super-heated plasma,” said Thompson.

He described components of the circling plasma striking and altering the composition of the retaining walls and heavy atoms dislodging from the struck walls and altering the plasma. Reactions take place in nanoseconds at temperatures as hot as the sun. Trying to modify components using trial and error to improve outcomes is extraordinarily laborious.

Machine-learning algorithms, on the other hand, use computer-generated data without direct measurements from experiments and can yield information that eventually could be used to make plasma interactions with containment wall material less damaging and thus improve the overall energy output of fusion reactors.

“There is no other way of getting this information,” said Thompson.

Small number of atoms predict the energy of many

Thompson’s team expects that by using large datasets of quantum-mechanics calculations under extreme conditions as training data, they can build a machine-learning model that predicts the energy of any configuration of atoms.

This model, called a machine-learning interatomic potential, or MLIAP, can be inserted into huge classical molecular dynamics codes such as Sandia’s award-winning LAMMPS, or Large-scale Atomic/Molecular Massively Parallel Simulator, software. In this way, by interrogating only a relatively small number of atoms, they can extend the accuracy of quantum mechanics to the scale of millions of atoms needed to simulate the behavior of fusion energy materials.

“So why is what we are doing machine learning and not just bookkeeping lots of data?” asks Thompson rhetorically. “The short answer is, we generate equations from an infinite set of possible variables to build models that are grounded in physics but contain hundreds or thousands of parameters that keep us within range of our target.”

One catch is that the accuracy of the MLIAP model depends on the overlap between the training data and the actual atomic environments encountered by the application, said Thompson.

These environments may be various, requiring new training data and alteration of the machine-learning model. Recognizing and adjusting for overlaps is part of the work of the next few years.

“Our model at first will be used to interpret small experiments,” Thompson said. “Conversely, that experimental data will be used to validate our model, which can then be used to make predictions about what is happening in a full-scale fusion reactor.”

Team members include researchers from Sandia, Los Alamos National Laboratory and the University of Tennessee at Knoxville.