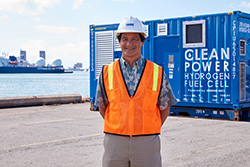 “We are pleased to help expand this clean energy technology to new applications,” said Young Brothers, Ltd., President Glenn Hong. Young Brothers is hosting a project led by Sandia National Laboratories to test a hydrogen-fuel-cell-powered generator as an alternative to diesel in powering refrigerated containers. (Photo by David Murphey) Click on the thumbnail for a high-resolution image.

HONOLULU — A new chapter in clean energy is starting in Hawaii. At Young Brothers Ltd.’s Port of Honolulu facility, Sandia National Laboratories is leading the Maritime Hydrogen Fuel Cell project to test a hydrogen-fuel-cell-powered generator as an alternative to conventional diesel generators.

“Today, we take another big step in transforming our nation to a clean energy economy,” said Schatz. “The fuel cell technology being deployed today will one day mean less carbon pollution in our ports and on the high seas. The great work from all the partners involved, especially Young Brothers, is helping lead the way to a cleaner, more energy-efficient future.”

In June, Hawaii Gov. David Ige signed four energy bills, including one that strengthens Hawaii’s commitment to clean energy by directing the state’s utilities to generate 100 percent of their electricity sales from renewable resources by 2045. As the most oil-dependent state in the nation and one that could be most affected by rising sea levels, Hawaii has become an early adopter of emerging technologies and innovative energy solutions.

Planning for the Maritime Hydrogen Fuel Cell project began in late 2012 with a study that determined that hydrogen fuel cells could replace diesel generators in providing auxiliary power on board and to ships at berth. The U.S. Department of Energy’s (DOE) Fuel Cell Technologies Office and the U.S. Department of Transportation’s Maritime Administration are funding the six-month deployment of the hydrogen-fuel-cell-powered generator.

“At the point of use, hydrogen fuel cells produce nothing but water — zero pollutant emissions and no greenhouse gases,” said Joe Pratt, Sandia’s project lead. “This technology could enable major commercial ports and marine vessels to lessen their environmental impacts.”

An analysis by Sandia and DOE showed that due to fluctuating loads in maritime auxiliary power applications, a hydrogen fuel cell, which only supplies power when it is needed, is more energy efficient than a diesel engine.

Clean power at the Port of Honolulu

“Young Brothers will be testing and demonstrating this technology on our on-shore and ocean environments over the next six months,” said Hong. “We are very pleased to have been selected to participate in this project with our many national and international partners in expanding this clean technology into new applications.”

Hickam Air Force Base in Honolulu is supplying the hydrogen to power the fuel cell. The hydrogen is produced by electrolysis, the process of splitting water into hydrogen and oxygen, using electricity supplied by Hickam’s solar-powered electrical grid.

Future deployment and other ports

Following the six-month test of the fuel cell unit, the project team will analyze the project’s successes and challenges, including the operating and cost parameters needed to make a business case at other ports.

“The long-range goal is to develop a commercial-ready technology that can be widely used at other ports,” said Pratt. “The project team sees a strong market need and desire for a fuel cell solution, not only at maritime ports but also for users who aren’t connected to a grid. That could extend to developing countries and remote locations worldwide.”