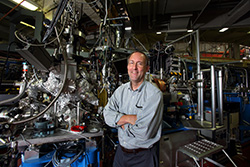 “Storing hydrogen on board vehicles is a critical enabling technology for creating hydrogen-fueled transportation systems that can reduce oil dependency and mitigate the long-term effects of burning fossil fuels on climate change,” said Sandia chemist Mark Allendorf, the consortium’s director.

Called the Hydrogen Materials – Advanced Research Consortium (HyMARC), the program is funded by the U.S. Department of Energy’s (DOE) Fuel Cell Technologies Office within the Office of Energy Efficiency and Renewable Energy at $3 million per year for three years, with the possibility of renewal. In addition to Sandia, the core team includes Lawrence Livermore and Lawrence Berkeley national laboratories.

The consortium will address the gaps in solid-state hydrogen storage by leveraging recent advances in predictive multiscale modeling, high-resolution in situ characterization and material synthesis. Past efforts, which synthesized and characterized hundreds of materials for solid-state hydrogen storage, laid a solid foundation for current work including the understanding of the kinetics and thermodynamics governing the physical properties of these types of storage methods.

“By focusing on the underlying properties and phenomena that limit the performance of storage materials, we will generate much-needed understanding that will accelerate the development of all types of advanced storage materials, including sorbents, metal hydrides and liquid carriers,” said Brandon Wood, who is leading the Lawrence Livermore team.

Sandia is an international leader in hydrogen materials science, exemplified by its role as the lead lab in DOE’s Metal Hydride Center of Excellence, which ran from 2005-2010. The consortium will leverage the core capabilities of the three partners, primarily synthetic chemistry at Sandia, theory and modeling at Lawrence Livermore and characterization at Berkeley Lab.

The world-class supercomputing facilities at Lawrence Livermore and Sandia are key elements of the team’s strategy to develop the enabling science for hydrogen solid storage technologies, along with advanced experimental tools available at Berkeley Lab’s Advanced Light Source and Molecular Foundry facilities.

In the past five years, fuel cell electric vehicles (FCEVs) have gone from a concept to reality. Automakers are starting to roll out commercial FCEVs and investments are being made to deploy hydrogen refueling infrastructure, especially in early markets, such as California and the Northeast.

Although HyMARC will consider all types of hydrogen storage materials, two categories of solid-state materials, novel sorbents and high-density metal hydrides, are of particular interest. These materials have the potential to meet DOE targets to deliver hydrogen at the right pressure and energy density to power a hydrogen fuel cell vehicle.

A key challenge is the thermodynamics — the energy and conditions necessary to release hydrogen during vehicle operation. Sorbents, which soak up hydrogen in nanometer-scale pores, bind hydrogen too weakly. In contrast, metal hydrides, which store hydrogen in chemical bonds, have the opposite problem — they bind the hydrogen too strongly.

The kinetics, the rate at which a chemical process occurs, is also an issue for high-density metal hydrides. These materials undergo complicated reactions during hydrogen release and uptake that can involve transitions between liquid, solid and gaseous phases. In some cases, the chemical reactions can form intermediates that trap hydrogen.

The consortium will explore several innovative ideas for solving these problems. The overall concept is to synthesize well-controlled materials to serve as model systems and develop experimental platforms for systematically probing key processes that limit performance.

“Using these tools, we can study the hydrogen reactions with these materials using state-of-the-art techniques, such as those at Berkeley Lab’s Advanced Light Source and Molecular Foundry, which can provide unprecedented spatial resolution of material composition and character in real time,” said Jeff Urban, Berkeley Lab team lead.

The HyMARC strategy embodies the approach highlighted within the recent Materials Genome Initiative (MGI) Strategic Plan for accelerated materials development. The focus is on developing a set of ready-to-use resources accessible to the entire hydrogen storage community.

“With our extensive knowledge base of hydrogen storage materials and new tools for characterization, modeling and synthesizing materials, many of which were not available even five years ago, our goal is to develop codes, databases, synthetic protocols and characterization tools,” said Allendorf. “These resources will create an entirely new capability that will enable accelerated materials development to achieve thermodynamics and kinetics required to meet DOE targets.”