ALBUQUERQUE, N.M. — The U.S. Marine Corps are the first boots on the ground in a crisis. On the front lines, they must be able to power up securely without plugging into utilities. They require nothing less than completely reliable and cost-effective energy independence. 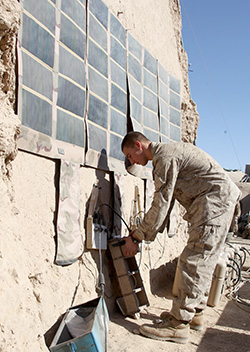 A U.S. Marine recharges batteries in the field for small electronics using a lightweight solar portable system. Sandia National Laboratories engineers are working with the U.S. Marine Corps to help plan for such future renewable energy investments. (Photo courtesy of the U.S. Marine Corps) Click on the thumbnail for a high-resolution image.

Researchers from Sandia National Laboratories are collaborating with the Marine Corps to increase their energy security and reduce fuel dependence through alternative technologies, including renewable energy and microgrids. The Marine Corps recently began a new effort with Sandia to develop analytic software tools that will give military decision-makers the quantitative support needed to achieve their long-term renewable energy goals.

“We are honored to partner with the United States Marine Corps,” said Sandia project lead Nadine Miner. “The modelling and optimization suite of tools that Sandia has developed will provide the Marine Corps with the information they need to help make decisions about which renewable energy technologies to invest in. The tools will also help them understand the impacts of their decisions. This project will help the Marine Corps invest taxpayers’ money wisely.”

The collaboration builds on modeling, simulation and analysis work that Sandia began in 2012 with the Marine Corps’ Expeditionary Energy Office. The new endeavor takes advantage of Sandia’s breadth and depth of experience with microgrids — localized grids that generate and consume power and can run either independently or connected to the larger utility grid.

Sandia computer scientist John Eddy is one of the original developers of the MDT and is currently the project’s technical lead. He said the tool’s unique multi-objective optimization offers many different solutions to build a system. On the new project, Sandia will customize the toolkit to enable the Marine Corps to make smart choices in planning investments in microgrids and renewable energy technologies, such as solar and batteries and, further down the line, wind. 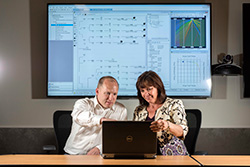 Sandia National Laboratories researchers Nadine Miner and John Eddy are collaborating with the U.S. Marine Corps to help them make smart decisions on renewable energy planning with a powerful software tool called MDT, the Microgrid Design Toolkit. (Photo by Randy Montoya) Click on the thumbnail for a high-resolution image.

Sandia originally developed the technologies underlying the MDT through sponsorship from the Department of Energy and Department of Defense (DoD) to assess and design reliable and resilient microgrids. Applications have included the award-winning Joint Capability Technology Demonstration program known as the Smart Power Infrastructure Demonstration for Energy Reliability and Security (SPIDERS) program and the design of the microgrid-based backup power system for the city of Hoboken, New Jersey, in the aftermath of Hurricane Sandy. A beta version of MDT is also available for public download.

Military and Energy Systems Analysis Department manager Alan Nanco said, “This project is an exemplar effort that aligns with the energy collaboration memorandum of understanding signed by the DOE and the DoD in 2010. It emphasizes the need to accelerate joint efforts in clean energy and national energy security technologies from national laboratories to military end users.”