Finding fire and ice: Modeling the probability of methane hydrate deposits on the seafloor

RALEIGH, N.C. — Methane hydrate, an ice-like material made of compressed natural gas, burns when lit and can be found in some regions of the seafloor and in Arctic permafrost. 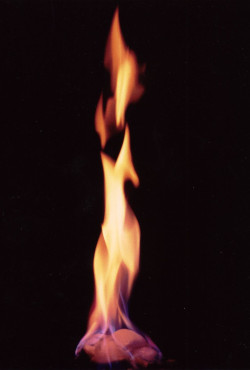 Sandia National Laboratories researchers used advanced computer models to predict the like­lihood of finding methane hydrate, an ice-like material made of compressed natural gas that burns when lit. (Photo courtesy of U.S. Geological Survey) Click on the thumbnail for a high-resolution image.

Thought to be the world’s largest source of natural gas, methane hydrate is a potential fuel source, and if it “melts” and methane gas is released into the atmosphere, it is a potent greenhouse gas. For these reasons, knowing where methane hydrate might be located, and how much is likely there, is important.

A team of researchers from Sandia National Laboratories and the U.S. Naval Research Laboratory have developed a new system to model the likelihood of finding methane hydrate and methane gas that was tested in a region of seafloor off the coast of North Carolina.

“This is the first time someone has been able to approach methane hydrate distribution in the same way we approach weather forecasting,” said Jennifer Frederick, a computational geoscientist and lead researcher on the project. “When you hear a weather forecast for a 60% chance of two inches of rain, you don’t necessarily expect exactly two inches. You understand that there is uncertainty in that forecast, but it is still quite useful. In most places on the seafloor we don’t have enough information to produce an exact answer, but we still need to know something about methane and its distribution. By using a probabilistic approach, similar to modern weather forecasting, we can provide useful answers.”

The new system combines Sandia’s longstanding expertise in probabilistic modeling with machine learning algorithms from the Naval Research Laboratory. The system was tested and refined by modeling the area around Blake Ridge, a hill on the seafloor 90 to 230 miles southeast of North Carolina’s Outer Banks with known deposits of methane hydrate and methane gas.

The team shared their model for Blake Ridge and compared it with previous empirical data in a paper published on March 14 in the scientific journal Geochemistry, Geophysics, Geosystems.

The Naval Research Laboratory’s Global Predictive Seafloor Model provides site-specific details on seafloor properties, such as temperature, overall carbon concentration and pressure. If data is missing for a certain region, the Naval Research Laboratory’s model uses advanced machine-learning algorithms to estimate the missing value based on information about another area that may be geographically distant but similar geologically.

The research team imported the data from the Naval Research Laboratory’s model into Sandia software that specializes in statistical sampling and analysis, called Dakota. Using Dakota, they determined the most likely value for influential seafloor properties, as well as the natural variation for the values. Then, in a statistical manner, they inserted a value from this expected range for each property into PFLOTRAN, another software maintained and developed at Sandia. PFLOTRAN models how chemicals react and materials move underground or under the seafloor. The team conducted thousands of methane production simulations of the Blake Ridge region. All the software involved in the system is open source and will be available for other oceanographic researchers to use. 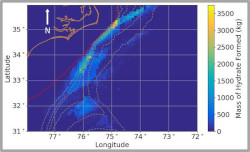 Using Sandia National Laboratories’ longstanding expertise in probabi­listic modeling and machine learning algorithms from the U.S. Naval Research Laboratory, the researchers determined the probabil­ity of finding methane hydrate off the coast of North Carolina’s Outer Banks. (Image courtesy of William Eymold) Click on the thumbnail for a high-resolution image.

“One of the biggest things we found is that there is almost no formation of methane hydrates shallower than 500 meters, which is to be expected given the temperature and pressure needed to form methane hydrate,” said William Eymold, a postdoctoral fellow at Sandia and primary author of the paper. Solid methane hydrate is known to form in low-temperature, high-pressure environments where molecules of methane are trapped within well-organized water molecules.

The team also found methane gas formed closer to shore. They were able to compare their model to methane hydrate values calculated by past studies and samples collected a few decades ago by the National Science Foundation’s Ocean Drilling Program, he said. For example, methane hydrate was detected in a seafloor sample collected from a hole drilled on Blake Ridge called Site 997.

“The fact that we predicted methane hydrate formation in similar amounts to past studies and observations really showed that the system appears to be working pretty well, and we will be able to apply it to other geographic locations that may have less data,” Eymold said.

Importance of methane to the Navy and next steps

The location of methane hydrate deposits and methane gas near the seafloor is important to the Navy.

“Understanding how sound interacts with the seafloor is really important for any kind of naval operation,” said Frederick. “Methane gas affects the acoustics dramatically. Even if only 1% or 2% of the pore space in the seafloor sediment is filled with a gas bubble, the speed of sound decreases a hundredfold, or more. This is a very large effect, and if you don’t account for it properly, then you’re not going to get precise acoustics.”

Frederick compared a submarine using sonar to the early arcade game Breakout, where a player moves a paddle horizontally in order to keep a ball bouncing to destroy a wall of bricks. In this analogy, the seafloor serves as the “paddle” to reflect or refract sound waves, or the “ball,” in order to get a complete view of obstacles in the ocean. If the paddle started to bounce the ball differently — or held on to the ball for varying lengths of times — depending on where the paddle was located, the game would become far more challenging.

So far, the team has used their system to create models of a region of the Norwegian Sea between Greenland and Norway and the shallow waters of the Arctic Ocean offshore of the North Slope of Alaska, two areas of interest to the Navy.

Frederick has also worked with a large team of international experts to assess the amount of methane and carbon dioxide stored in the shallow Arctic seafloor, and how sensitive those deposits would be to rising temperatures.

The team has also created a much coarser model of the whole globe and has started looking at the mid-Atlantic, where methane gas was spotted bubbling out of the seafloor a few years ago.

“It will be interesting to see if our model is able to predict these regions of methane seeps on the seafloor,” Frederick said. “We’d like to see if we can predict the distribution of these methane seeps and whether they are consistent with the thermodynamic properties of methane-hydrate stability. When you see a seep, that means that there is a lot of gas beneath the seafloor. That will significantly impact how sound travels through the seafloor, and thus sonar. Also, these deposits could be a source of natural gas for energy production, will impact the ocean ecology and nutrient cycles, and if that gas reaches the atmosphere, it will have climate change implications.”

This research was funded by Sandia’s Laboratory Directed Research and Development program. Frederick is seeking funding to continue the project with her collaborators at the Naval Research Laboratory.