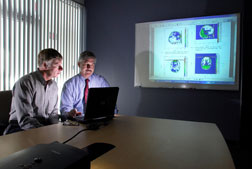 ALBUQUERQUE, N.M. — Research by a Sandia National Laboratories engineer and a University of New Mexico Health Sciences Center neurologist shows that brain injury may occur within one millisecond after a human head is thrust into a windshield as a result of a car accident.

This happens prior to any overall motion of the head following impact with the windshield and is a new concept to consider for doctors interested in traumatic brain injury (TBI).

Paul Taylor of Sandia’s Multiscale Computational Materials Methods Department and Corey Ford, neurologist at UNM’s Department of Neurology and MIND Imaging Center, made the discovery after modeling early-time wave interactions in the human head following impact with a windshield, one scenario leading to the onset of TBI. 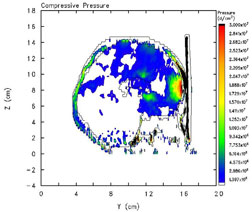 TBI is associated with loss of functional capability of the brain to perform cognitive and memory tasks, process information, and perform a variety of motor and coordination functions. More than five million people in the U.S. live with disabilities associated with TBI.

“In the past not a lot of attention was paid to modeling early-time events during TBI,” Taylor says. “People would — for example — be in a car accident where they hit their head on a windshield, feel rattled, go to an emergency room, and then be released. We were interested in why people with head injuries of similar severity often have very different outcomes in memory function or returning to work.”

More notice has been given to TBI in recent years because of the large number of U.S. soldiers returning home from Iraq with head injuries caused by blast waves from discharged improvised explosive devices. 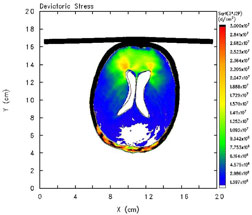 Computer models were then constructed representing the skull, brain, CSF, and windshield glass. The simulations were run on Sandia’s Thunderbird parallel architecture computer using 64 processors for each simulation.

“The results of our simulations demonstrate the complexities of the wave interactions that occur among the skull, brain, and CSF as the result of the frontal impact with the glass windshield,” Taylor says. 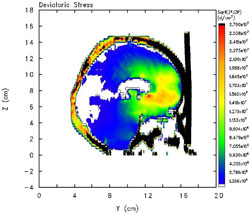 The modeling represents what would happen to an unrestrained person hitting the windshield of an automobile in a 34 mph head-on collision with a stationary barrier.

In discussions between Taylor and Ford, it became apparent that different types of cell damage might occur depending on the type of stress to which the cells are exposed. “Isotropic stress,” commonly called pressure stress, imposes density changes that can damage a cell’s internal structure. “Shearing stress” acts as a tearing mechanism that damages the cell wall and membranes, giving rise to apoptosis, or cell death. Both are likely at play in most incidents leading to TBI.

Each type of stress is displayed on two different views of the brain — the sagittal view — where the brain is cut between the left and right hemispheres — and an axial view in a plane perpendicular to the longitudinal axis of the body just above the eyes and ears.

“Through our modeling we were able to predict early-time stress focusing within the brain during an impact event. However, we have yet to identify what specific levels of stress will lead to TBI,” Taylor says. 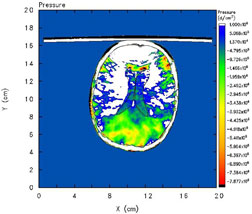 “This is the focus of our future research effort. Furthermore, our current models simulate the brain as homogeneous. We want to create a higher-resolution simulation capability that better represents the various portions of the brain to provide detailed specificity of our results.”

Such capabilities may allow Taylor and Ford to have a better understanding of how the early-time stress contributes to TBI and aid in the design of better protection devices such as headgear for sports and military personnel.