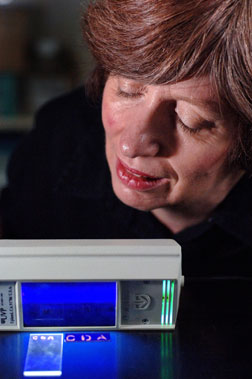 ALBUQUERQUE, N.M. — Far above the heads of Earthlings, arrays of single-cell creatures are circling Earth in nanostructures.

The sample devices are riding on the International Space Station (courtesy of Sandia National Laboratories and the University of New Mexico, NASA and US Air Force) to test whether nanostructures whose formations were directed by yeast and other single cells can create more secure homes for their occupants — even in the vacuum and radiation of outer space — than those created by more standard chemical procedures.

“Cheap, tiny, and very lightweight sensors of chemical or biological agents could be made from long-lived cells that require no upkeep, yet sense and then communicate effectively with each other and their external environment,” says former UNM graduate student and Sandia consultant Helen Baca, lead author on the paper. Baca was advised by Sandia Fellow and UNM professor of chemical engineering, molecular genetics & microbiology Jeff Brinker.

Groups of such long-lived cells may also serve as models to investigate how tuberculosis bacteria survive long periods of dormancy within human bodies.

En masse, they also may be used to generate signals to repel harmful bacteria from the surfaces of surgical tools like catheters.

Topographical confocal projections of cells which have integrated onto predefined lipid-silica films. (The fuzzy, darker parts are the cells that have redistributed the green fluorescent lipid from the plane of the thin film into three dimensions around the cells) (Slides courtesy of UNM grad student Eric Carnes)
Download 300dpi JPEG image, “cells-on-lipid.jpg,” 412K (Media are welcome to download/publish this image with related news stories.)

“This is not the end of the story, but the beginning,” says Brinker. “No one else has created these symbiotic materials and observed these effects. It’s a totally new area.”

But how does all this happen?

What better arrangement when building a new house than for the architect to consult with the tenants?

In a paper in the July 21 issue of Science, a team of researchers from Sandia and UNM under the leadership of Brinker demonstrated that common yeast cells (as well as bacterial and some mammalian cells) customize the construction of nanocompartments built for them.

These nanocompartments — imagine a kind of tiny apartment house — form when single cells are added to a visually clear, aqueous solution of silica and phospholipids, and the slurry is then dried on a surface. (Phospholipids are two-sided molecules that make up cell membranes.)

Ordinarily, the drying of lipid-silica solutions produces an ordered porous nanostructure by a process known as molecular self-assembly. This can be visualized as a kind of tract housing.

In the current experiments, however, the construction process is altered by the live yeast or bacteria.

This improved architecture seamlessly retains water, needed by the cell to stay alive. Further, by eliminating stresses ordinarily caused by drying, the nanostructure forms without fine-line cracks. These improvements help maintain the functionality of the cell and the accessibility of its surface.

By comparison, the more common practice of merely ‘trapping cells in gels’ leads to stress, cracks, and rapid cell death upon drying.

Already launched on the space shuttle

The incorporated cells of the Brinker group are self-sustaining — they do not need external buffers and even survive being placed in a vacuum.

To study their use as cell-based sensors for extreme environments, samples of the yeast- and bacteria-containing nanostructures were launched on the recently completed mission of the US space shuttle Discovery. On the Space Station, experiments will be performed to determine their longevity when exposed to the extreme stresses of the radiation and vacuum of outer space.

Of the NASA mission, Brinker says, “Ordinarily, exposed to such extreme conditions, the cells would turn into raisins. But, because of the remarkable coherency of the cell-lipid-silica interface and the ability of the lipid-silica nanostructure to serve as a reservoir for water, no cracking or shrinkage is observed. The cells are maintained in the necessary fluidic environment.”

The cell-architected nanostructure is, he says, “an amazing way to preserve a cell.”

The cells already have emerged still viable after examination in electron microscopes and after X-ray exposure in Argonne National Laboratory’s Advanced Photon Source, where the accelerating voltage ranges from one to 20 keV, says Brinker.

It is noteworthy that the entrapped cells easily absorb other nano-components inserted at the cellular interface. Because of this, the cell can internalize new DNA (introduced as a plasmid), providing an efficient form of genetic modification of cells without the usual procedures of heat shock or cumbersome puncturing procedures (electroporation) that could result in cell death. Thus, the yeast can be modified to glow fluoresecent green when they contact a harmful chemical or biotoxin.

Because such nanostructures are cheap, extremely light and small, and easy to make, they could conceivably be attached to insects and their emanations read remotely by beams from unmanned aircraft.

The method also makes it easier to prepare individual cells for laboratory investigation under microscopes. “Normally, to visually examine a cell, researchers use time-consuming fixation or solvent extraction techniques,” says Brinker. “We can spin-coat a cell in seconds, pop the cell into an electron microscope, and it doesn’t shrink when air is evacuated from the microscope chamber.”

The cell can be immediately imaged, says Brinker. “Spin-coating” refers to deposition of the cell slurry on a spinning substrate until dry.

From their comfortable “home,” the empowered cells can also direct their own landscaping. They can organize metallic nanocrystals added at the cell surface. These may enhance the sensitivity of Raman spectroscopy for monitoring the onset of infection or the course of therapy. The cells also localize proteins at the cellular interface.

Assistant Professor Graham Timmins of UNM’s College of Pharmacy notes that the encapsulated cells’ unusual longevity may serve as a model for persistent infections such as tuberculosis, which has a long latency period. TB bacteria can remain dormant in vivo for 30-50 years and then re-activate to cause disease. Presently the state of the dormant bacterium is not understood. Timmins and Brinker are discussing further experiments to validate the model.

Finally, building the cells into a coating with a high enough density might elicit from them a defensive, multi-cellular signal of an unpleasant nature that discourages unwanted biofilm formation on the coated surface — important for avoiding infections that could be carried by implants and catheters.

The cell’s ability to sense and respond to its environment is what forms these unique nanostructures, says Brinker. During spin-coating, the cells react to the increasing concentrations of materials in the developing silica nanostructure by expelling water and developing a gradient in the local pH. This in turn influences lipid organization and the form of the silica nanostructure, reduces stress, and ultimately improves the living conditions of the ensconced cellular tenants.

The work was initially funded by Sandia’s Laboratory Directed Research and Development (LDRD) office, and then by DOE’s Basic Energy Sciences group for its fundamental implications, and then (through UNM) by the Department of Defense (Air Force) for its practical possibilities.