Sensor will be capable of simultaneously detecting thousands of proteins, DNA, whole cells, and pathogens 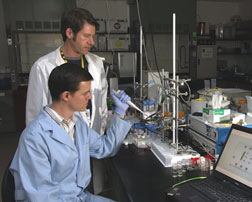 ALBUQUERQUE, N.M. —A Sandia National Laboratories research team is developing a new type of electrochemical sensor that uses a unique surface chemistry to reliably and accurately detects thousands of differing biomolecules on a single platform.

The new bioagent detection system could be applicable in homeland defense, safeguarding warfighters, and clinical diagnostics.

“A problem with the majority of existing biosensors is that they only look for one type of biomolecule [DNA or protein] at a time,” says Jason Harper, research team member. “This can often lead to inaccurate or inconclusive results and limits the use of the sensor. Where our sensor differs is that multiple characteristics of several bioagent targets can be tested on a single chip.”

For example, instead of using only an antibody that binds to the surface of an anthrax spore, the new Sandia sensor could test for several DNA sequences and internal and external proteins unique to anthrax. This provides numerous positive readings for the target agent or agents, significantly increasing confidence in the sensor results. 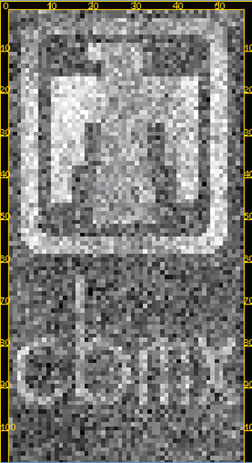 The platform, a microfabricated chip, is just one inch by one inch in size. Several technological advances in microfabrication processes have increased the numbers of electrodes that can be produced on a sensor platform. A major challenge is how to pattern different biomolecules onto closely spaced micrometer-sized electrodes. The research team believes the answer lies in the electrodeposition of aryl diazonium salts.

“This diazonium-based surface chemistry can be selectively deposited onto several types of substrates by controlling the charge of the substrate in the diazonium solution,” Wheeler says. “Because the deposition of the diazonium molecules is based on the application of an electrical potential, the selective patterning of individually addressable electrodes is possible. Upon deposition, covalent bonds are formed with the substrate, producing a highly stable film.”

The chemistry is also compatible with a wide variety of biomolecules. DNA, antibodies, enzymes, and peptides all have been patterned onto arrays at Sandia using this chemistry.

After treating the sensor with the target solution, the array is washed and treated with a different solution containing molecules that bind to the other end of the target biomolecule, forming a “sandwich.” These secondary labels form an electroactive product that is detected by the electrode.

Says team member Ronen Polsky, “We are also investigating a new electrochemical detection method, using electrocatalytic nanoparticles, that we hope will eliminate the extra washing and labeling steps. This will greatly simplify the end device.”

Some of this work was recently featured in an article in Langmuir, published by the American Chemical Society. Diazonium chemistry was used to selectively deposit the enzyme horseradish peroxidase, which was then used to electrochemically detect hydrogen peroxide.

Electrochemical detection holds many advantages over other common optical-based biosenors. By eliminating optics and using semiconductor microarrays the end device is smaller, more rugged, and simpler in design.

Eventually the sensor array will be integrated in a deployable electrochemical sensor that will have an electronic readout identifying the biomolecules detected, or wirelessly transmit the results to a computer or network. Reaching that point will take anywhere from two to five years, says Ronen.

Currently the sensor arrays in the project allow for selective identification of nine biomolecules, Harper says. However, the work has kindled the interest of commercial sensor companies. The Sandia team recently traveled to Seattle to test their surface chemistry on a commercial array produced by CombiMatrix, a company that specializes in producing semiconductor arrays with more than 12,000 individually addressable electrodes in an area less than one inch square.

“The team successfully patterned peptide ligands onto 2,151 individual electrodes out of an array of 12,544 electrodes,” says Susan Brozik, project principal investigator. “The resulting electrochemical signal from protein biodetection on the patterned electrodes formed the Sandia Thunderbird symbol as well as the CombiMatrix logo.”

Because of this initial success, Sandia and CombiMatrix are pursuing a cooperative research and development agreement (CRADA) for further development of a sensor using Sandia’s surface chemistry and CombiMatrix’s electrode array, to ultimately test for thousands of biomolecules simultaneously. Funding for this research has been provided by Sandia’s internal Laboratory Directed Research and Development (LDRD) program, the National Consortium for Measurement and Signatures Intelligence (MASINT) Research, a Defense Intelligence Agency program that seeks to promote collaborated research among academia, industry, laboratories, and DOE. CombiMatrix is funded by the Defense Threat Reduction Agency.