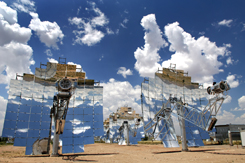 The conversion efficiency is calculated by measuring the net energy delivered to the grid and dividing it by the solar energy hitting the dish mirrors. Auxiliary loads, such as water pumps, computers and tracking motors, are accounted for in the net power measurement.

“Gaining two whole points of conversion efficiency in this type of system is phenomenal,” says Bruce Osborn, SES president and CEO. “This is a significant advancement that takes our dish engine systems well beyond the capacities of any other solar dish collectors and one step closer to commercializing an affordable system.”

Serial #3 was erected in May 2005 as part of a prototype six-dish model power plant at the Solar Thermal Test Facility that produces up to 150 kilowatts (kW) of grid-ready electrical power during the day. Each dish unit consists of 82 mirrors formed in a dish shape to focus the light to an intense beam.

The solar dish generates electricity by focusing the sun’s rays onto a receiver, which transmits the heat energy to a Stirling engine. The engine is a sealed system filled with hydrogen. As the gas heats and cools, its pressure rises and falls. The change in pressure drives the pistons inside the engine, producing mechanical power, which in turn drives a generator and makes electricity.

Lead Sandia project engineer Chuck Andraka says that several technical advancements to the systems made jointly by SES and Sandia led to the record-breaking solar-to-grid conversion efficiency. SES owns the dishes and all the hardware. Sandia provides technical and analytical support to SES in a relationship that dates back more than 10 years.

Andraka says the first and probably most important advancement was improved optics. The Stirling dishes are made with a low iron glass with a silver backing that make them highly reflective —focusing as much as 94 percent of the incident sunlight to the engine package, where prior efforts reflected about 91 percent. The mirror facets, patented by Sandia and Paneltec Corp. of Lafayette, Colo., are highly accurate and have minimal imperfections in shape.

Both improvements allow for the loss-control aperture to be reduced to seven inches in diameter — meaning light is highly concentrated as it enters the receiver.

Other advancements to the solar dish-engine system that helped Sandia and SES beat the energy conversion record were a new, more effective radiator that also costs less to build and a new high-efficiency generator.

While all the enhancements led to a better system, one aspect made it happen on a beautiful New Mexico winter day — the weather.

“It was a ‘perfect storm’ of sorts,” Andraka says. “We set the record on Jan. 31, a very cold and extremely bright day, a day eight percent brighter than normal.”

The temperature, which hovered around freezing, allowed the cold portion of the engine to operate at about 23 degrees C, and the brightness means more energy was produced while most parasitic loads and losses are constant. The test ran for two and a half hours, and a 60-minute running average was used to evaluate the power and efficiency data, in order to eliminate transient effects. During the testing phase, the system produced 26.75 kW net electrical power.

“This exciting record shows that using these dishes will be a cost-effective and environmentally friendly way of producing power,” Osborn says. “SES is actively engaged in the commercialization of the system, called the ‘SunCatcher,’ including continuing to prepare it for mass production, completing project site development and preconstruction activities, and establishing partnerships with substantial manufacturing and industrial organizations to develop a cost-effective manufacturing process and supply chain. The demonstrated high efficiency means more energy is generated for the given investment, lowering the cost of the energy delivered.”

SES was formed in 1996 to develop and commercialize advanced solar technology. The company maintains its corporate headquarters in Phoenix, Ariz, project and technical development offices in Tustin, Calif, and engineering and test site operations at Sandia National Laboratories in Albuquerque.