ALBUQUERQUE, N.M. — Sandia National Laboratories will bring decades of experience solving problems with practical engineering and modeling complex systems to cities around the world under a new agreement to support the 100 Resilient Cities Centennial Challenge, pioneered by the Rockefeller Foundation.

The challenge, which will help 33 cities in its first year, seeks to make communities more resilient, by being better prepared to withstand natural or manmade disasters, recover more quickly and emerge stronger. 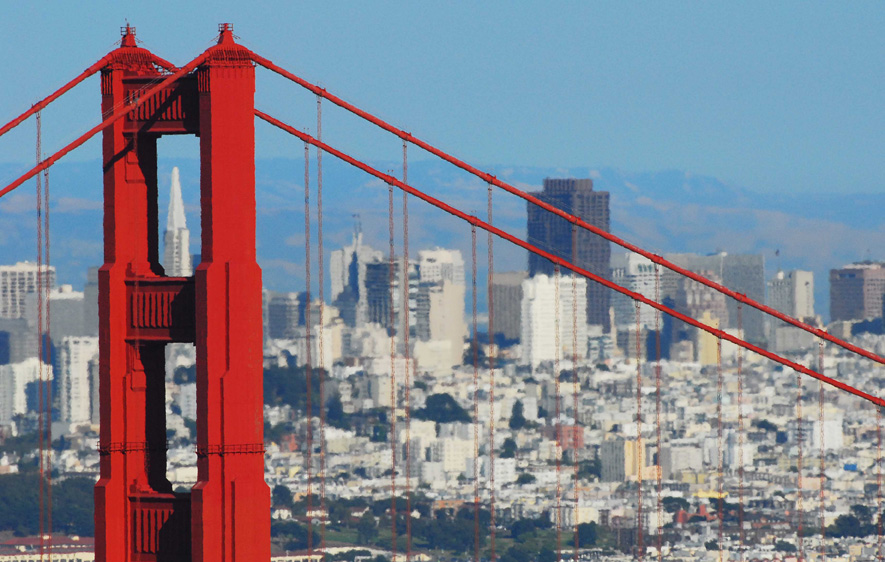 San Francisco is one of 33 cities selected so far for the 100 Resilient Cities Centennial Challenge, pioneered by the Rockefeller Foundation. Sandia National Laboratories hopes to bring its technical expertise to cities like San Francisco and eventually create a framework for all cities. (Photo by Randy Montoya) Click on the thumbnail for a high-resolution image.

“We are eager to partner with the 100 Resilient Cities Centennial Challenge,” said Jill Hruby, vice president of International, Homeland, and Nuclear Security at Sandia, who signed the memorandum of understanding. “We see this as an opportunity to bring the best minds in science and engineering to help people around the world recover from the shocks and stresses of modern threats and times.”

Five-year partnership to bring framework of best practices to cities

Sandia Labs, a multidisciplinary national security laboratory, has developed resilience methodologies, models and other tools that could be used to create a resiliency framework based on best practices worldwide, but adapted to cities’ individual needs, said Charles Rath, project lead for Sandia Labs.

“The ultimate goal is to improve global stability by kick-starting a worldwide resiliency movement,” he said. “We want to use this experience to develop models and best practices that can be shared with cities across the world.”

Under the five-year memorandum, Sandia will supply cities with a toolkit of infrastructure and socio-economic models that will help local leaders better assess specific resilience challenges, set priorities and select the most cost-effective ways to address them.

“Sandia’s experts have deep knowledge in how to address nearly every challenge a city might face —  everything from how to make its energy grid more resilient to how to achieve a more clean and sustainable water supply,” Rath said.

Miller helps cities think about threats facing them, how a city might be vulnerable to those threats and what the consequences are.

To define a city’s risk, Miller taps experts across the labs to look at the likelihood of natural or manmade disasters. In the case of terrorist attacks, she tries to understand how someone who wants to harm a city would be motivated, make decisions and act.

To assess a city’s vulnerabilities, Miller ties together threats and consequences to uncover potential weaknesses. The analyses also identify critical infrastructure, such as transportation, electricity, communications, hospitals and other facilities that would be vulnerable.

Finally, the analyses identify potential consequences, such as how many people would be injured in a natural disaster or how many buildings would have to be closed, to help cities prioritize how to become more resilient, she said.

“We’re a systems engineering lab. That means we look at processes from end to end, defining the problem, identifying the needs, defining the requirements, engineering a solution and making it happen,” Miller said.

Looking at complex systems — in this case, cities — also encourages municipal developers to address multiple risks, rather than create a separate plan for each hazard, she said.

This process “helps cities prioritize and have an explanation of why they’re investing in one thing versus another,” she added. “It helps build consensus.”

Ellis works with a Sandia team on infrastructure resilience to prevent the kind of damage suffered in New York and New Jersey after 2012’s Superstorm Sandy.

Sandia researchers are using the labs’ Energy Surety Design Methodology, which has a successful track record at military facilities, for two projects in New Jersey funded by the Department of Energy.

Sandia is working with the city of Hoboken, N.J., to assess and develop designs for improving the resiliency of the city’s electrical grid after the storm.

Sandia also is working on a study with New Jersey’s Transit Corporation, NJ TRANSIT, to provide a resilient energy supply system to trains running between New York and New Jersey during power disruptions.

Sandia is providing NJ TRANSIT with a design concept for a microgrid, which, if built, would be the largest microgrid by capacity and geographical footprint in the U.S., Ellis said. A microgrid is connected to a utility electrical grid, but can also operate as an “island” grid that self-sufficiently produces power when there is a disruption in the main grid.

The power system is being planned with resiliency in mind. For example, the generation plant and transmission and distribution lines will be protected from wind and storm surges, he said.

Resiliency requires planning ahead for disasters that might happen once every 50 years or more. That can cost millions of dollars up front, but can reduce a city’s exposure to billions of dollars in economic impact and repairs after a disaster, he said.

Ellis is excited about working with city governments and believes resiliency can become an attribute of cities, just like quality schools and clean water.

“Resiliency should contribute to the economic vitality of a city,” he said.

Tidwell believes access to clean water is a human right and works toward that end in his profession and as a volunteer traveling to South America and Africa to provide technical know-how.

“It’s always been in my heart. I’m trying to give back a little bit of what we take for granted in the U.S. by recognizing that a lot of people don’t have access to good, clean water,” Tidwell said.

In the U.S., helping cities with water issues has expanded in recent years from a focus on natural disasters or malevolent activity that affect water supplies to include more chronic issues of population growth and climate change and their impact on water resources.

Like many of Sandia’s researchers, Tidwell can work with cities to study their entire systems by taking into account water issues along with other concerns. “We’re really bringing together the energy, the water, the land, the food, environmental issues, looking across the board in trying to fashion a more holistic view of how these work together,” he said.

For example, Sandia can help explore the interplay between water and energy, water and food supply or other trade-offs; the laboratory can help developing cities provide safe drinking water, sanitation or build needed infrastructure in a cost-effective and efficient manner through the use of technology; or perhaps identify specific technologies to produce clean drinking water.

Mark Ehlen, co-project lead, said citizens in resilient cities should notice the benefits of resiliency not only during disasters, but also in their everyday lives.

“A resilient city is livable and workable. There’s clean air, a good standard of living, not too much congestion, housing and education are affordable and there’s a sense of community,” he said. “Resilient cities can evolve over time to accommodate an increase in population, increased disparities in income so that in the long-term, social mobility is preserved.”