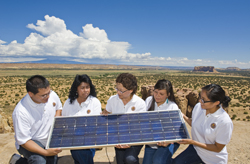 Sandra Begay-Campbell (center) with interns Devin Dick, Tammie Allen, Gepetta Billie and Chelsea Chee at Sky City within the Pueblo of Acoma. Begay-Campbell is describing how a photovoltaic panel works to generate electricity. (Photo by Randy Montoya) Click on the thumbnail for a high-resolution image.

ALBUQUERQUE, N.M. – Most Americans take electric power for granted, but for thousands of people living on tribal lands, getting to the grid can be a challenge.

A lack of infrastructure, transmission capabilities and policies impede the availability of electricity within the reservations and to outlying tribal areas.

A program at Sandia National Laboratories addresses those challenges and connects tribal governments in remote regions with viable electricity solutions. At the same time, Sandia is training a new generation of Native American renewable energy advocates.

Sandra Begay-Campbell, a Sandia researcher and member of the Navajo Nation, started the internship in 2002 and works with tribes all over the country. “I wanted to help build capacity within tribal governments. The goal is to get to the point where you have tribal members who have technical skills to implement these programs,” said Begay-Campbell. “DOE Tribal Energy Program funds the interns; the students do the work and intensive research. At the end of the summer, we provide the DOE with their research papers. The students are able to see what is available to them, and they grow as advocates for renewable energy.”

Begay-Campbell is actively involved in higher education and mentoring students. The University of New Mexico (UNM) Regents President recently named her to the UNM presidential search committee. She is a former UNM regent, Foundation Board member and Distinguished Engineering Alumna for 2005.

Using renewable energy sources is increasingly popular among tribes seeking affordable and sustainable ways to meet the demands of growing populations on tribal lands. On a recent field visit to Acoma Pueblo’s Sky City, Begay-Campbell and her interns listened to the energy efficiency goals met by the pueblo. Beginning discussions with Acoma’s Tribal Utility Authority may lead to Sandia’s support of their energy planning efforts.