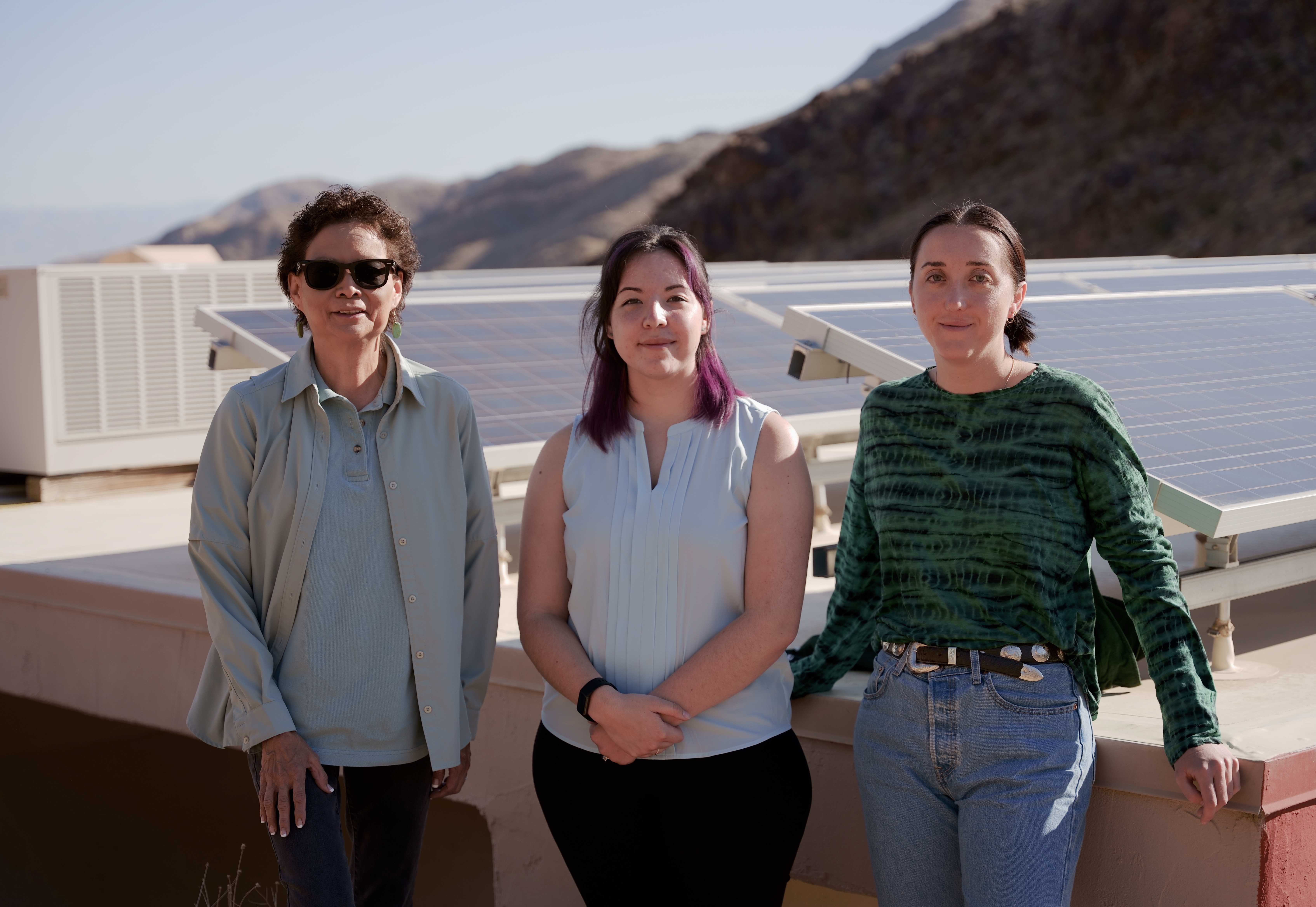 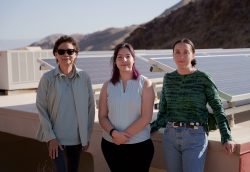 From left to right, Sandra Begay, a Sandia National Laboratories engineer and member of the Navajo Nation; Sarah LaVallie, an intern in the tribal energy internship program and a member of the Turtle Mountain Band of Chippewa Indians; Rachel Herring, another year-round intern and a member of the Choctaw Nation; at the Agua Caliente Band of Cahuilla Indians’ off-grid solar-powered trading post. Sandia’s tribal energy internship program has provided two decades of real-world experience for Native and Alaska Native STEM students. (Photo by Lorenzo Vidali) Click on the thumbnail for a high-resolution image.

“My hope for the interns is for them to be leaders in clean energy, leaders in sustainable development, leaders in renewable energy projects,” said engineer Sandra Begay, who created the program in 2002 and is a member of the Navajo Nation. “I also hope that they have a little bit easier path than what I’ve had. I enjoy having a relationship with the interns beyond the internship program; I want to help them in their academic endeavors and also when they choose what they want to do with their life.”

Since its inception, the program has provided valuable experiences for 47 undergraduate and graduate science, technology, engineering and math students, approximately two-thirds women, from 24 different Native American and Alaska Native tribes. The internship program is sponsored by the Department of Energy’s Office of Indian Energy Policy and Programs.

The core of the internship program is a full-time, 90-day summer experience where Begay passes down her decades of experience working with tribes on renewable energy projects, in turn the interns bring in the latest knowledge from their classes and their different experiences. Each student works on a research paper and final presentation that builds off of their academic background and tribal membership.

In addition to the summer interns, Begay also has interns who work for her part-time all year, while also taking classes. This year she has three summer interns and two year-round interns.

“I’ve always been interested in renewable energy, but this internship program has really given me a sense of purpose in what I want to do,” said Sarah LaVallie, a year-round intern in the program who is pursuing a master’s degree in science, technology and environmental policy from the University of Minnesota and is a member of the Turtle Mountain Band of Chippewa Indians. “Through this program I’ve been able to meet some of my greatest mentors and it’s been a great way to learn about tribal renewable energy projects. Getting to see some of these projects that I’ve been reading about for years was really cool and getting to learn some of the reasons why tribes decided to pursue renewable energy.”

After their internships, approximately 20% of prior interns stayed at Sandia as year-round interns, while about 11% were eventually hired as Sandia employees. Other interns have gone on to work at the DOE Office of Indian Energy Policy and Programs; form a nonprofit to bring solar installation, maintenance and support to native communities across the country; work as an engineer for the Navajo Tribal Utility Authority overseeing projects of more than 150 megawatts of solar power; and become a professor. More broadly, about half of the interns have pursued research directly related to renewable energy in Indian Country, 36% remained in STEM fields and 4% work for or started nonprofits.

In addition to working on real-world projects and receiving significant mentorship, as part of the program Begay takes the students to renewable energy projects on tribal lands to learn about the challenges and successes of the projects while also meeting tribal energy leaders.

“I bring the students out to projects where it’s possible they do some technical assistance work,” Begay said. “Two of the projects I’ve chosen to highlight as successes are the Campo Kumeyaay wind farm and the Agua Caliente solar installation. I chose these two projects because they are very different in the approach, very different in the tribe and two different technologies. They’ve been fielded and working for at least 15 years. It’s really the people at the tribal administration — the leaders, the project managers — that can tell you what actually happened to get these projects in the ground.”

Todd Hooks, the director of economic development for the Agua Caliente Band of Cahuilla Indians, who has been hosting student interns for several years, agrees with the value of the site visits.

“It’s one thing to read the information through journals or reports or participate in conferences, it’s a whole other thing to come out, look, touch, feel and see the real context and the hurdles to overcome to make things like this happen,” he said of the interns getting to visit the tribe’s solar-powered trading post.

The Agua Caliente Band of Cahuilla Indians decided to power their off-grid trading post with solar panels and batteries, instead of simply replacing a failing propane generator, or marring their natural vistas and the historical home of the tribe by connecting the trading post to the electric grid.

“I think what I’ve learned so far from these visits is that each project is really individualized,” said Rachel Herring, another year-round intern who is pursuing a master’s degree in international environmental policy at the Middlebury Institute and is a member of the Choctaw Nation. “I’ve found that it’s been really important to see it in real life, see what those challenges are, and be an active listener to the tribes and understand what’s going on.”

The Kumeyaay wind farm consists of 25 wind turbines on land leased from the Campo Kumeyaay tribe. In addition to the land-lease revenue, the tribe also gets royalties from the power sold to San Diego Gas and Electric Co., which provides power to San Diego County and the city of San Diego. Mike Connolly Miskwish, a member of the Campo Kumeyaay tribe who was on the tribal council when the wind project was approved and installation began, said the money from the wind farm helped to sustain the tribe during the Great Recession.

He also agreed about the value of the program.

“I would have really liked this when I was young,” Connolly Miskwish said of the internship program. “If I had been able to see how I could be an engineer, be a scientist, and still contribute to my community, contribute both to the economic base and to the safety and health of the people in my community. I would have liked to have had been able to see something like this when I was a young engineer.”