ALBUQUERQUE, N.M. — The Department of Energy has chosen five more small, clean-energy businesses to work with Sandia National Laboratories to speed the commercialization of next-generation technologies and gain a global competitive advantage for the U.S. 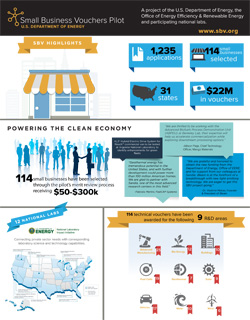 The Department of Energy’s Small Business Vouchers pilot has forged partnerships between 114 U.S. companies and the national labs. The program gives small businesses access to intellectual and technical resources they need to overcome critical technology challenges for their advanced energy products. (Graphic courtesy of the Department of Energy) Click on the thumbnail for a high-resolution image.

“Sandia is excited to bring these small businesses together with our scientists and engineers to tackle challenges and bring new products to the clean-energy marketplace,” said Mary Monson, Sandia’s senior manager of industry partnerships. “These partnerships support our energy mission and help the companies and the economy. We’re delighted to be a part of this kind of technology transfer.”

The Small Business Vouchers Pilot, or SBV, was launched in September 2015 letting companies apply for technical help from DOE labs. In March 2016, 33 companies were selected to receive $6.7 million in funding. Seven of them are working with Sandia through vouchers totaling $1.62 million. In August 2016, another 43 companies were chosen to receive $8 million in vouchers, five of them with Sandia totaling $983,000.

The announcement of third-round awards was made April 18 at Earth Day Texas in Dallas. The DOE Office of Energy Efficiency and Renewable Energy, or EERE, said eight national labs will receive $7.3 million in vouchers to work with 38 small businesses. The companies selected to work with Sandia are M3Wave LLC of Salem, Oregon; California Wave Power Technologies LLC of Berkeley; Sentient Science Corp. of Buffalo, New York; Ceramic Tubular Products of Lynchburg, Virginia; and Vacuum Process Engineering Inc. of  Sacramento, California. The vouchers total $1.14 million and range from $160,000 to $354,000 each.

“Sandia is working through the SBV pilot with small businesses nationwide, creating jobs and economic vitality,” said Jackie Kerby Moore, Sandia’s manager of technology and economic development. “The potential for widespread national impact from these partnerships is profound and exhilarating.”

The eight DOE national laboratories participating in the new round of collaborations are home to some of the most advanced, cutting edge research sites in the world, including Sandia’s Scaled Wind Farm Technology (SWiFT).

The latest companies selected to collaborate with Sandia are working on a wide variety of clean-energy efforts:

“Sandia has been a pioneer in clean-energy technologies,” said Juan Torres, chief of operations for Sandia’s Energy and Climate programs. “We have decades of expertise in solar, wind, water power and bioenergy, and can help these companies be successful.”