Small businesses to work with Sandia on clean technologies

“Sandia is excited to help these companies commercialize their products and advance the clean-energy economy,” said Jackie Kerby Moore, Sandia’s manager of technology and economic development. “This is tech transfer at its best, bringing national laboratory expertise to the private sector and helping the environment.” 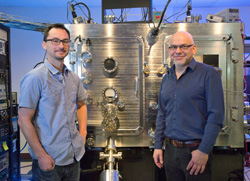 Chris Wung, left, is senior scientist, and Vladimir Matias is CEO of iBeam Materials Inc. The Santa Fe company was one of seven small businesses chosen to work with Sandia National Laboratories to advance their technologies. iBeam is developing new LED products for the lighting, display and wearable electronics industries. (Photo by Sandra Valdez) Click on the thumbnail for a high-resolution image.

The Small Business Vouchers Pilot was launched Sept. 23 with a website where companies could apply to receive technical help from DOE labs. In today’s announcement, the DOE Office of Energy Efficiency and Renewable Energy (EERE) said 33 of the hundreds of applicants received funding for the first of three rounds of the pilot. Nine DOE labs will participate, with a combined first-round budget of $6.7 million.

Companies selected to collaborate with Sandia are working on a wide variety of clean-energy efforts:

“The Small Business Vouchers Pilot will let us collaborate with Sandia’s world-renowned solar researchers,” said Skysun President Jim Clair. “That would normally be beyond the reach of a start-up like Skysun. This teamwork will dramatically accelerate our technology’s acceptance and deployment into the marketplace.”

Companies can continue to apply for vouchers

Two more rounds of competition will be offered to small businesses in 2016. To be eligible, businesses must be U.S.-based and -owned with no more than 500 full-time employees worldwide.

Companies can apply to Sandia through the SBV website for $50,000 to $300,000 in vouchers that can be used for a variety of technical services. Successful companies will be required to provide a 20 percent cost share or in-kind services.

Fabrizio Martini, technical lead at FastCAP Systems, said the partnership with Sandia will help validate the company’s geothermal energy technology. “Geothermal energy has tremendous potential in the United States, and with further development could power more than 100 million American homes,” he said. “We are glad to partner with Sandia, one of the most advanced research centers in this field.”