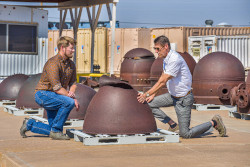 Brad Beeny, left, a Sandia National Laboratories nuclear engineer and code developer, and Larry Humphries, the lead code developer for Sandia’s nuclear accident modeling computer code, examine remnants from a series of Lower Head Failure experiments. The results from these experiments, and many others, are used to inform the code. (Photo by Randy Montoya) Click on the thumbnail for a high-resolution image.

A number of new nuclear reactor designs, such as small modular reactors and non-light water reactors, have been developed over the past 10 to 15 years. In order to help the Nuclear Regulatory Commission evaluate the safety of the next generation of reactors, fuel cycle facilities and fuel technologies, researchers at Sandia National Laboratories have been expanding their severe accident modeling computer code, called Melcor, to work with different reactor geometries, fuel types and coolant systems.

These advancements have been demonstrated at several virtual public meetings this summer. The purpose of these meetings is to show U.S. policymakers, members of the nuclear energy industry, international nuclear energy regulators and members of public interest groups that the NRC has the tools needed to evaluate the safety of new and advanced nuclear reactor designs.

“This computer code really is the Swiss Army knife of nuclear system safety,” said David Luxat, manager for Sandia’s nuclear reactor severe accident modeling group. “It is a flexible toolbox of physics and chemistry that allows us to simulate how a nuclear power plant or another nuclear facility reacts during an accident that could potentially lead to the release of radioactive material into the environment. In my view, the code is central to enabling the innovation of nuclear energy in the U.S. and thus mitigating the worst outcomes from climate change.”

Advancing the safety code for the next generation

Sandia and the NRC have worked together for decades to advance the understanding of system performance under accident conditions. This research covered areas such as accident progression, combustible gas generation and transport, molten core concrete interaction, fuel coolant interactions and many others. Starting in the 1980s, the NRC directed Sandia to consolidate these capabilities into one software package.

The Melcor code can model a wide array of phenomena including severe accidents that can occur at a nuclear power plant, then estimate the extent of radioactive material release possible due to the accident. Work on the code began after the Three Mile Island accident in 1979.

A timeline of Sandia National Laboratories-led studies to inform the severe accident code, efforts to expand the code to advance reactor designs, as well as world events that led to further Sandia studies. (Image by Laura Hatfield) Click on the thumbnail for a high-resolution image.

Currently, the computer code is used to inform the NRC’s regulatory decision-making activities, including licensing reviews for new reactors, regarding the risks from very low-likelihood but high-impact accidents. In fact, Sandia’s code was used to study the Fukushima accident and evaluate the risk-reduction potential of several safety improvements to U.S. nuclear reactors for the NRC, Luxat said.

There are many different types of next-generation nuclear reactors, each with their own performance attributes. Small modular reactors take up one-tenth of the area or less of current reactors, with lower initial investments, and could possibly be manufactured at one central location and moved to remote locations. As the industry develops new methods and technologies, however, existing capabilities must also advance, based on decades of foundational work. Some advanced designs, such as helium-cooled high-temperature reactors, can use more robust, graphite-pebble-based nuclear fuel. This approach requires adjustments to Melcor for modeling reactor geometry and the physics of the coolant.

Since 2018, Luxat’s team has expanded the severe accident code to tackle these differences, and more, to enable the evaluation of the risks of next-generation reactors and impacts to the fuel cycle in general. To expand the code capabilities, Larry Humphries, the lead code developer, has been working with experts at other Department of Energy labs to determine the critical phenomena for the reactor types. He then works to fit those phenomena into the existing physics-based code, determine what physical parameters are missing and fill in those knowledge gaps.

“We want to leverage the decades of experience and validated models in the code and extend it to new reactor designs and new applications,” said Humphries, who has worked on Melcor for two decades, and before that he spent a decade doing experiments to inform and refine the base code. “This code is an ideal tool to apply to new reactor designs where there is a great deal of uncertainty. It has the ability to set sensitivity parameters and determine which variables are critical to produce risk assessment data for regulators.”

To demonstrate that Melcor is ready to assist the NRC in reviewing new reactor designs, the team developed models of three published nuclear reactor designs. The three reactor designs were chosen to represent the diversity of next-generation reactors, including a microreactor originally designed by Los Alamos National Laboratory, a high-temperature helium-cooled reactor, and a high-temperature molten-fluoride-cooled reactor, said K.C. Wagner, a Sandia nuclear engineer who has been leading the demonstration calculations.

The reactor models include everything from the radionuclides expected to be in the reactor vessel and the building that surrounds it to the coolant pipes and the physical properties of the fluid within, Wagner said. Then the team simulated a wide range of potential accidents. They analyzed what happens as time progressed to see how much, if any, fission products are released.

The results of these simulations were presented at the public meetings to highlight the code’s capabilities as the NRC works to establish its readiness to evaluate next-generation reactors.

“If industry is ever going to be able to build anything new and exciting, we need to be able to do safety and licensing calculations of the next generation designs so that the U.S. regulators can assess them,” said Brad Beeny, a Sandia nuclear engineer and code developer. “We’re mostly concerned with characterizing the radiological hazard that could be posed to the public, should an accident happen. It may not be the most flashy aspect of nuclear energy, but it is one of the most necessary.” 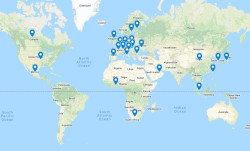 A map showing countries that use Sandia National Laboratories’ severe accident modeling code to improve the safety of their nuclear power plants. After the U.S., Korea is the country with most licensed users of the code at 120 individuals. (Image by John Reynolds) Click on the thumbnail for a high-resolution image.

However, it’s not just the U.S. that will benefit from the extension of the nuclear safety code.

“This best-estimate, severe-accident analysis code is used by maybe 1,000 people around the globe in about 30 countries,” Wagner said. “Through the Cooperative Severe Accident Research Program, we are giving these folks access to a tool that they can also use to improve nuclear power plant safety world-wide.”

Since the early 2000s, Melcor has been expanded and updated to support safety assessments for other kinds of nuclear facilities — including research reactors, reactors that produce medical isotopes and DOE facilities that work with radioactive material — and even fusion reactors, Luxat and Humphries said.

“The code is a repository of decades of knowledge on nuclear accidents, which shows nuclear energy is fundamentally low risk for society,” Luxat said. “We have been able to leverage this knowledge to enhance the safety and economics of nuclear power plants in the U.S. Now, Sandia is working to expand on and apply this knowledge to enable the next generation of even safer, more economic nuclear power reactors. This will be critical to combatting climate change and enhancing the energy security of future generations.”

The team is also working to restructure the safety code so that it will be easier to model new reactor designs and answer new safety questions, Humphries said. He added, “I have every reason to believe that in the next 10 years the code will continue to be an important tool for the NRC, an important contributor to our understanding of severe accidents, no matter the new type of reactors.”

Melcor is discussed in NRC’s vision and strategy for non-light water reactors for both reactor accidents and in the nuclear fuel cycle. The NRC’s independent Advisory Committee on Reactor Safeguards has favorably reviewed the code’s role in the strategy.