ALBUQUERQUE, N.M. — Gary Polansky, the chief scientist for hypersonic technology development and applications at Sandia National Laboratories, has been named a fellow of the American Institute of Aeronautics and Astronautics (AIAA). 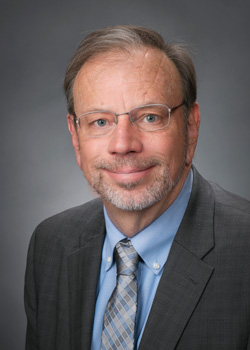 AIAA, the world’s largest aerospace professional society, confers the distinction of fellow to recognize professionals’ notable and valuable contributions to the arts, sciences or technology of aeronautics and astronautics. Since the honor’s 1934 inception, there have been 1,848 fellows elected, according to AIAA.

“Gary’s engineering and leadership skills have led to more than a decade of technological innovation in conventional global strike programs. Over his career, he has helped the U.S. become a global leader in advanced hypersonic flight systems,” said David Plummer, director of Sandia’s Integrated Military Systems Center.

The induction ceremony will take place at the AIAA Aerospace Spotlight Awards Gala on May 3 in Washington, D.C.

In his nearly 35-year career at Sandia, Polansky’s leadership has helped advance the U.S. role in the deployment of hypersonic and space nuclear technology in support of Sandia’s national security missions.

His career-long achievements resulted in the first successful test flight of the Advanced Hypersonic Weapon (AHW) from a Sandia test facility in 2011. A year later, the Sandia team received Lockheed Martin’s highest honor, the NOVA award, for its AHW work.

Widely recognized for his expertise, he is a trusted consultant for other government agencies on hypersonics and national security topics.

He advised the Interagency Nuclear Safety Review Panel (INSRP) on nuclear safety for the launches of the Pluto New Horizons and Mars Science Laboratory space missions.

The Pluto New Horizons launch in 2006 was challenging from a nuclear safety perspective because aged nuclear fuel pellets had to be used due to a fuel shortage. Polansky led efforts to recover historical data on fuel aging, analyze the data in the context of the space mission and develop models to characterize the uncertainty associated with aged fuel.

His contributions were important to the INSRP independent safety assessment and the presidential decision to proceed with the launch. He received a NASA Certificate of Commendation for this effort.

Earlier in his career at Sandia, Polansky led the development and rocket sled testing of Kinetic Energy Projectile (KEP) warheads in 2006 and the technical team that conducted sled track tests of an advanced fuze for high-speed penetrators. He also was instrumental in developing new rocket-sled, payload-separation technology that enabled the longest ever free-flight of a separated vehicle to target impact.

Polansky holds a doctorate from the University of Texas at Austin. He has authored or co-authored more than 50 technical publications in computational physics, nuclear technology and hypersonic systems.