ALBUQUERQUE, N.M. — Hurricane Katrina whipped up huge, powerful waves that caused severe destruction in 2005 along the U.S. Gulf Coast. Their size and strength convinced Phil Kithil of Santa Fe, New Mexico, there had to be a way to harness that energy. 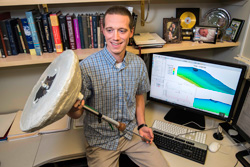 Tim Koehler, a Sandia National Laboratories mechanical engineer, is using computational fluid dynamics modeling to help the Santa Fe, New Mexico, company Atmocean with the design of a buoy — shown here in a miniature prototype — that powers a wave energy system to desalinate ocean water for coastal cities. He said he enjoys working with private industry through the New Mexico Small Business Assistance program.  (Photo by Randy Montoya) Click on the thumbnail for a high-resolution image.

His first thought was a device that would use wave action to pump deep, cold seawater to the surface to dampen the intensity of hurricanes, which thrive on warm water. He proved the concept with a simple tube and one-way valve attached to a buoy, but the idea had no commercial potential as hurricanes are unpredictable.

He thought of a second use because the wave-action pump also brought to the surface concentrated ocean nutrients such as phosphate and silicate that promote the growth of phytoplankton. “Phytoplankton take in carbon dioxide to metabolize nutrients and give off oxygen,” Kithil said. “We felt the pumps had a role to play in climate change mitigation.”

But, again, the business potential evaporated when governments participating in the 2009 United Nations Copenhagen Climate conference did not take action that would open carbon markets for the device.

The third idea was the charm. Kithil and his company, Atmocean Inc., founded in 2006, partnered with the Albuquerque engineering firm Reytek Corp. in 2010 to produce a pump system that uses wave power to send pressurized seawater onto shore where it is desalinated without the use of external energy. Kithil said the system has a simple design and can be set up cheaply and in rural settings to provide fresh water for drinking and farming in coastal cities.

Working with scientists at Sandia National Laboratories through the New Mexico Small Business Assistance program, the two companies have tested and advanced the technology and moved it close to market by attracting significant investment. Atmocean recently signed a fourth NMSBA agreement. Small businesses can apply for help through the program once a year. “We wouldn’t be where we are today without Sandia’s help,” said Chris White, Atmocean’s chief operating officer. “It provided us with the backbone of validating our technical improvements so we could go forward.”

Small business program lends a hand with research and development

NMSBA is a public-private partnership among Sandia Labs, Los Alamos National Laboratory and the state of New Mexico that lets small business owners who have a technical challenge work with scientists and engineers at the national labs. Created in 2000 by the state Legislature, the program brings world-class technology and expertise to small companies and promotes economic development with an emphasis on rural areas. NMSBA has provided 2,648 small businesses in all 33 of the state’s counties with more than $53.3 million worth of research hours and materials.

“Many small companies don’t have the resources to do advanced research and development. NMSBA is a great way to give them an R&D hand,” said Jackie Kerby Moore, manager of Technology and Economic Development at Sandia Labs. “National laboratory expertise helps these people realize their dreams and build their businesses, a win-win for the economy.”

“We needed to know if we would get a dribble at the end or a gusher of pressurized water,” Kithil said. “Rick came up with the answer — a gusher. If it was a dribble we’d have no business. With a gusher we could estimate expenses and profit. That’s how important the Sandia research was. We could take an interesting idea to business feasibility.”

Buoys float off the coast of Ilo, Peru, in a 2015 test of a wave energy system developed by the Santa Fe, New Mexico, company Atmocean with technical help from Sandia National Laboratories. The system powers a desalination plant that provides coastal cities with fresh water. (Photo courtesy of Atmocean Inc.) Click on the thumbnail for a high-resolution image.

Sandia Labs’ findings have helped Atmocean attract about $3.5 million in investment to continue product testing, add staff and boost component manufacturing at Reytek. The company built full-size seawater pumps and tested the system off the coast of Oregon in 2011 and off Peru for six months in 2015. “The first Peru tests were a big success,” Kithil said. “Other small communities want to see if it will work for them.”

System to be deployed off Newfoundland for operational testing

Atmocean is working now with Sandia Labs engineer Tim Koehler on computational modeling of the wave energy system. Following trials in a test tank at the Texas A&M University Haynes Laboratory, the system will be deployed later in the year off the coast of Newfoundland for a third round of testing that will demonstrate the prototype in an operational environment.

Atmocean’s system is a 200-foot by 200-foot array of pumps floating on the ocean. “Each pump is a buoy on a piston,” Koehler said. “As a wave passes, the buoy ingests sea water, and as the buoy settles, it pumps seawater through hydraulic lines back to shore where it enters the zero-electricity desalination process.”

Water arrives onshore at about 180 psi, or pounds per square inch of pressure. Atmocean uses energy recovery devices — essentially spinning mechanical wheels — to boost 14 percent of the arriving seawater to 900 psi, the pressure needed to run reverse osmosis. The system is the size of a shipping container and is manufactured by Atmocean industry partners. “We supply the pressurized seawater and we work with standard industry-proven technologies on the desalination,” White said.

The system runs 24/7 and production depends on wave action. White said that in southern Peru, in typical ocean conditions, 50 million cubic feet of pressurized water is pushed to shore in a year. Fourteen percent of that is desalinated, producing 5 million cubic feet of fresh water annually that can be used for agriculture or consumption.

Kithil said the system is inexpensive to operate, offers local employment and helps the environment. “Each array of pumps creates a defacto marine protected area with artificial structures that see marine growth,” he said. “The system uses small boats operated by local fishermen who get consistent work. During our full-scale pilots in Peru in 2015, we saw a huge outpouring of support from the local fishing community.”

Kithil and Fullam are working with Koehler to improve the pump design. “They want to know what forces the ocean, through the passage of waves, puts on the buoys, so they can optimize their performance and be as efficient as possible,” Koehler said. He is using computational fluid dynamics modeling to evaluate various buoy designs engineered by Reytek and narrowed down through wave pool tests. “I will give them an idea of ocean forces on various pump designs,” he said.

Koehler’s first foray into NMSBA has been eye-opening, he said. “It’s a different application than what I typically work on and uses different software, so it adds some breadth to my experience,” he says. “It’s been a good process in terms of my personal and professional growth. I’m learning more, and it’s nice to help a small business. I like the idea. It’s a good way to help rural communities with clean energy technology.”

After the final demonstration in Newfoundland, Atmocean, which presented the technology at the 2016 United Nations Solutions Summit, will seek a commercial partner. “If all goes well, we’re looking at a year-and-a-half after the tests to reach commercialization,” White said.

Fullam said NMSBA provided needed resources and experience to the company. “The computer modeling tools are something a small company could never afford. We’ve been able to use those resources to answer some rather esoteric questions and generate more questions. The people we’ve dealt with really know what they are doing, and we were able to pinpoint early in the development some key technical issues we wouldn’t have seen. We would have spent a lot of time spinning our wheels. It cut years off the development cycle.”