Terrorism experts say suicide bombings are pervasive because they generate publicity and require little expertise, resources or planning. Perhaps most importantly, they are almost impossible to prevent. 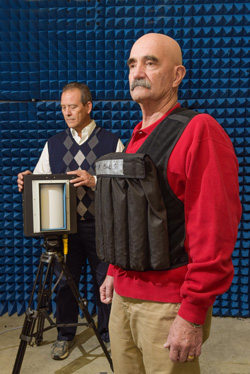 Until now, said Albuquerque businessman Robby Roberson. His company R3 Technologies and a group of other small businesses are developing a way to prevent suicide attacks by detecting concealed bombs before they go off. After a frustrating start, the group decided it needed more technical help and turned to the New Mexico Small Business Assistance (NMSBA) program, which pairs entrepreneurs with scientists and engineers at Sandia and Los Alamos national laboratories.

“The suicide bomber can walk into a crowded place unnoticed and inflict a horrifying amount of death and destruction,” Roberson said. “It’s very hard to stop. There was no technology to deal with it.”

R3 found a partner in Sandia sensor expert JR Russell who has helped bring the company’s Concealed Bomb Detector, or CBD-1000, close to commercialization over the past two years. “JR has been all over it and really turned things around for our company,” Roberson said. “He brings in sharp people from Sandia. I love working with those guys.”

Russell said his role largely has been to develop ways to measure how well the technology works. He zeroed in on the device’s accuracy by analyzing false positives and pushed to redevelop software so it would more reliably detect a bomb threat. “After getting to know Robby and the team I got more and more interested in the problem,” said Russell, who enlisted Sandia engineers Matt Erdman and Michael Bratton in the project. “The technical part of me took over. Engineers want to validate the model and we needed to validate the performance of Robby’s system. We threw out a lot of the existing technology. Early versions were a good start, but not where the technology needed to be.”

Screening for bombers in public places

The device is designed to detect bombs that current metal detector technology would miss and is intended for screening areas, such as airports, embassies, public and government buildings, border crossings, transportation hubs and military compounds. It is portable and could also be used at large special events.

The CBD-1000 is the size of a cereal box, weighs about 13 pounds and is mounted on a tripod. It is electric or battery powered and works with proprietary embedded software. The device uses a spread spectrum, stepped, continuous wave radar to bounce a signal off a subject. The software analyzes both horizontal and vertical polarized signals to determine the presence of a potential threat. “If the person is not carrying a threat, the return signal is in the same polarity as when it was transmitted,” Roberson said. “A threat will rotate the polarity of the signal, and it comes back differently.”

The system sets up in about 15 minutes and an operator, who does not need a working knowledge of radar, can be trained in 30 minutes. The scan takes about 1.3 seconds from 9 feet away. Roberson said the team is refining algorithms that will allow people in motion to be scanned at greater distances.

“We’re working toward an instantaneous scan so a person can be checked while moving through the beam field. And we hope to extend the range to 100 feet,” Roberson said. “We want to take movement out of the equation. People who want to protect their citizens want to detect at a distance, keep the threat away. They want to scan crowds and stop threats before they get too close.”

The original technology was developed by another Albuquerque company in the early 2000s as a hand-held, radar-based sensor that police could use to scan people moving at a distance who they suspected might be armed. It evolved into a stationary system. After years of development, the technology just didn’t work. “It became apparent that the system was not completely accurate,” Roberson said.

Roberson and his father, Coda Roberson, founded R3 Technologies to further develop and commercialize the technology. They approached Sandia for help through NMSBA and added partners including Manuel Rangel of APPI Inc. in Las Cruces, the acclaimed radar scientist Don McLemore of McLemore Enterprises LLC in Albuquerque, Lawrence Sher of Wind Mountain Research Associates in Albuquerque and Julie Seton of Indelible Enterprises in Las Cruces.

“When JR came onboard we all took a hard look at what we had, what it did and how it worked,” Roberson said. “JR came at this problem from a different point of view. He wanted to know everything about it. He helped us realize we had to go in a completely different direction. We reverse engineered the hardware and software. I can’t stress enough how important JR was.”

Russell said the Sandia employees studied noise surrounding the radar signal and how it impacted true positives and true negatives. They found a way to reduce noise and strengthen the signal, improving accuracy by minimizing false positives. “If the signal is bigger than the noise, it can scan people as they’re walking. They don’t have to stop,” he said. “These breakthroughs will enable new applications in security of the future and will increase the marketability and desirability in the field of the CBD-1000.”

Roberson hopes to go to market this year after working with Sandia to further improve the machine’s speed, distance and accuracy. He said the CBD-1000 will cost about $50,000 and that several hundred units have been produced. The device is patented, and the company has received inquiries from Pakistan, Afghanistan, Singapore, Kuwait, Saudi Arabia and Nigeria, he said.

Russell said he enjoys helping a small business. “It’s good for our community,” he said. “Helping someone succeed helps us succeed, too, as a lab. I get to see science though the eyes of business people. And I’ve learned things that will help me in my work.”

Russell said R3’s suicide-bomb detector resonates with Sandia’s national security mission. “We want to help our nation protect our people, our assets,” he said. “If we can save one life, we can make a difference. The opportunity to make us safer from attacks is one of the idealistic things that drive us.”

NMSBA was created in 2000 by the state legislature to bring national laboratory technology and expertise to small businesses in New Mexico, promoting economic development with an emphasis on rural areas. The program has provided more than 2,300 small businesses in all 33 New Mexico counties with $43.7 million worth of research hours and materials.

“The project between Sandia and R3 Technologies is a compelling example of how NMSBA is not only helping a New Mexico small business but also helping Sandia’s national security mission,” said Jackie Kerby Moore, Sandia’s manager of Technology and Economic Development. “We applaud JR and his team for helping the company commercialize its technology.”