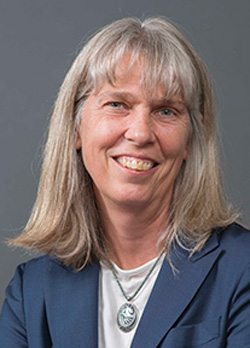 Sandia President and Labs Director Jill Hruby joined U.S. Secretary of Energy Ernest Moniz in China this month to commission a new Center of Excellence to promote nuclear security best practices in the region. (Photo by Randy Montoya) Click on the thumbnail for a high-resolution image.

“I am honored to represent Sandia at this auspicious occasion,” Hruby said. “We look forward to continuing our collaboration with colleagues at the Center of Excellence to promote nuclear security best practices in China and across the region.”

The Sandia Labs team consulted with the Chinese State Nuclear Security Technology Center (SNSTC) on the design, operation and testing of a physical protection system at a mock material processing nuclear facility at the COE for the proper handling and storage of special nuclear material.

Sandia will also support the future success of the center through the design of nuclear security curriculum to train China’s security professionals how to protect nuclear facilities and materials. The work is part of Sandia’s global security work to enhance security through partnerships that build a capacity worldwide to prevent the misuse of nuclear, chemical, biological and radiological materials.

“It’s in our national interest that everybody’s nuclear materials are secure,” said Nick Winowich, a civil engineer at Sandia. “We want to share our expertise in securing nuclear facilities and materials.”

Sandia’s leadership in physical security grew out of decades of work securing high-consequence facilities against theft and sabotage. Used across the DOE enterprise and by other U.S. and international agencies, performance–based design specifically defines a facility’s characteristics, vulnerabilities and all the potential security risks, including an adversary’s capabilities. Its central concept ensures that the time intruders need to steal materials or sabotage a facility exceeds the time responders need to stop them in a fully integrated system.

Armed with that analysis, Sandia designs physical protection systems that are customized to meet a specific facility’s needs.

According to Sandia employees, the lab and its counterparts at the China SNSTC developed a cooperative working relationship that will continue to support nuclear security and nonproliferation in the region long after the opening of the center.