Annual breadth of invention is wide

ALBUQUERQUE, N.M. — Competing in an international pool of universities, corporations and government labs, inventions from Sandia National Laboratories captured seven R&D 100 Awards (one in conjunction with the National Renewable Energy Laboratory) this year, as well as two special awards for green technology and corporate responsibility.

Independent panels of judges selected projects to represent the year’s 100 most outstanding advances in applied technologies. The awards focused on practical impact rather than pure research, and recognized entrants for their products’ designs, development, testing and production.

The criterion for winning has been “demonstrable technological significance compared with competing products and technologies,” and emphasizes properties such as smaller size, faster speed, greater efficiency and higher environmental consciousness.

The following is a list of Sandia’s winning projects.

The embedded software known as firmware requires frequent updates in most modern cars. But when these updates occur remotely over the airwaves, the update process is vulnerable to cyberattacks that can compromise critical functions like air bag response, steering, acceleration and braking. S-FOTA protection can be installed as a firmware plug-in in each car at its manufacturing plant and remotely managed by the manufacturer, without ever inconveniencing vehicle owners. S-FOTA provides the convenience of a single application interface as well as authenticity assurance, with enhanced security from mathematically quantifiable integrity checks.

Wave Energy Converter Simulator (WEC-Sim) is widely used by academia and industry to better understand how devices convert the motion of waves into usable energy and fare in the open sea. 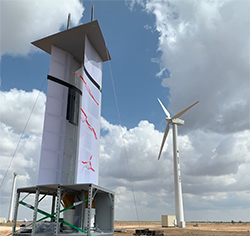 This advance can help replace physical testing with computer modeling and is the first open-source software tool allowing developers to numerically model wave-energy converter dynamics and performance. The multi-year collaborative effort included a team of researchers from Sandia and the National Renewable Energy Laboratory.

Distributed wind energy has the potential to significantly increase world-wide green energy production and allow microgrids to supplement the electricity grids in many regions.

Using a library of variable antibody fragments called nanobodies, Sandia researchers have assembled extremely potent next-generation anti-COVID-19 neutralizing antibodies. The unique features of nanobodies offer easier manufacturability, increased versatility, smaller size and the ability to bind to more than one target site to increase potency and resistance to viral mutants. Researchers have shown they can produce a nanobody-based countermeasure within 90 days, once a virus’ genetic code has been identified. The method has not yet been tested on humans. The researchers have filed for a patent on aspects of their work and are actively seeking commercial partners to help identify and engineer next-generation antibodies.

A reusable and rapidly producible N95 respirator for medical applications developed at Sandia can be completely disassembled for sterilization, decontamination and component replacement.

A swappable passive resonator transmits voice or can be used for fit certification. Air is filtered during inhalation/exhalation. A wide range of filter media, held in a protective structure, can be used to help alleviate supply chain issues. The researchers have filed a patent for the design of the RAPTR and are open to licensing the design.

QSCOUT provides scientists free and complete access to the only open quantum computing testbed in the world based on trapped ions. It gives the scientific community a new level of programming control and execution for improving quantum computer science.

These types of controls give researchers the ability to study and answer the major open questions in quantum computing, including understanding and mitigating sources of noise, learning how to characterize and validate quantum operations and developing and optimizing quantum algorithms for scientific applications.

In addition, Sandia researchers were awarded:

Portions of this research were funded by Laboratory Directed Research and Development.