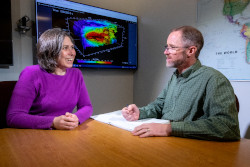 The Sandia-led Geologic Disposal Safety Assessment framework is a computer modeling system designed to answer critical safety assessment questions about future disposal options for spent nuclear fuel deep underground and the system of tunnels, containers and possible concrete-like barriers used to keep the radioactive material contained far from the surface and water sources, said Emily Stein, a Sandia manager overseeing the development of the framework. Work on this framework is supported by the Department of Energy’s Spent Fuel and Waste Science and Technology campaign.

“The goal of the framework is to provide the DOE a flexible and intuitive simulation and analysis capability for investigating different deep geologic repository systems,” Stein said. “It has to be flexible to look at different host rocks and the different processes that can occur in those different kinds of rocks. It has to work with different 3D-engineering designs. The DOE also wants it to be fairly straightforward to explain how various thermal, chemical, hydrological and mechanical processes were coupled in the model. There’s all this different stuff that goes on underground and the DOE wants to be able to think about the connections between those processes in a way that is somewhat intuitive.”

Sandia started working on the framework in 2012. Comparing the results from Sandia’s software against the results from the safety assessment software of international peers will build confidence in the software and models, Stein said. The comparison could also highlight areas for improvement.

Importance of a flexible software framework

There is broad international scientific consensus that a geologic repository is the safest and most secure method of permanently disposing of this spent nuclear fuel, Stein said. Sandia’s framework is designed to assess the safety of future geologic repositories and assist in licensing efforts. It can model everything from what happens to the spent nuclear fuel rods and the canisters that contain them, to the rock mere inches from the canisters or rock miles away.

“All of us in the international nuclear community are in the same boat — we need a safe place for our waste,” said Paul Mariner, a lead Sandia engineer on the project. “The framework is a system of codes that we can use to build a total-system model of a potential repository for a safety assessment. It really comes down to probabilistic risk assessment, which is a way to carefully and methodically address all of the questions regulators and citizens have about a repository by accounting for the probabilities of various events that could cause the release of radioactive material.”

The Geologic Disposal Safety Assessment framework is built upon two core Sandia software packages: PFLOTRAN and Dakota. PFLOTRAN is open-source software maintained and developed at Sandia and several other national labs that models how chemicals react, and how liquids and gases flow, underground, Stein said. “This is an important toolset because the primary thing we’re concerned with for a deep geologic repository is the movement of radioactive atoms out of the repository.”

Dakota is Sandia software that specializes in uncertainty sampling and sensitivity analysis, in other words determining which input values have the largest impact on the final results. Since no one can predict the future, Dakota assures researchers that the results are trustworthy, even if, for example, their estimate for the likelihood of a big earthquake occurring at the location over the next million years is uncertain. Laura Swiler, a Sandia computer scientist, has been instrumental in ensuring that the team has the sensitivity analysis tools needed for the safety assessment framework, Stein said.

“Uncertainty quantification calculations help us better characterize the repository system and also help us assess the significance of certain input values and processes that affect the final results,” Mariner said.

Stein added that the framework is massively parallel and runs on supercomputers, which is important for modeling what happens at a repository over a million years.

Recently a Sandia team, led by Michael Nole, made some significant improvements to PFLOTRAN to speed up calculations of certain challenging processes and improve the representation of how dry soil acts like a sponge, Stein said.

Comparing the results of Sandia’s software against the results from other teams’ software will build confidence in the software and models, Stein said. Specifically, the teams will compare the results of their models to see if there is a consensus reached by multiple teams. Then the models that produced different results will be studied to try to determine why their results were different. This will allow repository scientists from across the globe to learn from one another and improve their models. This comparison is part of an international collaboration called Development of Coupled Models and their Validation against Experiments, or DECOVALEX.

“The DECOVALEX initiative creates an important framework for experts in repository sciences from around the world to test and improve simulation models that are important to assessing the safety of geologic disposal,” said Jens Birkholzer, the chairman of the initiative and a senior scientist at Lawrence Berkeley National Laboratory. “Seventeen partner organizations, 50 modeling teams, and more than 100 simulation experts are currently involved in this global effort. Through collaborative model comparison, DECOVALEX demonstrates that long-term prediction of complex subsurface processes associated with geologic disposal can be achieved with a high level of confidence.”

Specifically for the two DECOVALEX reference cases, the Sandia team expanded the framework to model how salt mined out of a salt-based repository and then replaced around waste containers can heal itself back into solid, impermeable blocks over millennia, Stein said. They also refined their model on how water can flow around cracked crystalline rock and possibly move radioactive atoms within a geologic repository. These two improvements will likely be helpful in answering safety assessment questions about future U.S. spent nuclear fuel repositories.

In the future, Stein and her team hope to add more machine learning algorithms to the framework to speed up modeling some complex processes without impacting accuracy or transparency, she said.

“This type of comparison, where we’re all starting with the same two problem descriptions and are developing numerical models around them is one important way to create confidence in safety assessment models and the tools we’re using to do the simulations,” Stein said. “We can’t actually take this big, full million-year simulation and compare it to a real-world experiment of the same scale. It’s a very important exercise.”