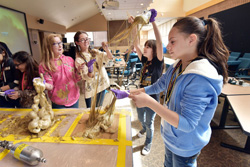 Students learned about sticky foam during the Sandia National Laboratories STEM Day in 2017. Sticky foam was first developed at Sandia in the late 1970s and used for security applications. (Photo by Randy Montoya) Click the thumbnail for a high-resolution image.

The event is part of the New Mexico Mathematics, Engineering, Science, Achievement, Inc. STEAM Extravaganza. NM MESA selected middle and high school students from across the state and invited them to Albuquerque to participate in immersive experiences in science, technology, engineering, art and mathematics, or STEAM, according to the organization.

“We’re excited to open our doors to these students. We want them to see the wide range of opportunities available to them when they study and work in STEM and to benefit from the expertise we have right here in our state,” said Sandia community relations specialist Katrina Wagner.

Sandia is one of 15 organizations that partnered with NM MESA for this event.

There will be four stations featuring a wide range of Sandia’s research and development work, including chemistry, cognitive science and eye tracking, delay technologies designed to strengthen physical security systems, environmental protection and other Sandia work.

The students, from Carlos Vigil Middle School in Espanola, will rotate through each station, learning from Sandia researchers at each stop.

Sandia researchers will educate the students about the scientific concepts on display and discuss their own career paths.