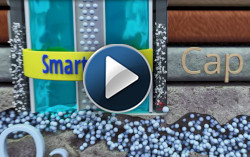 ALBUQUERQUE, N.M. — Sandia National Laboratories engineers are working on a device that would help ensure captured carbon dioxide stays deep underground — a critical component of carbon sequestration as part of a climate solution.

Click to watch an animation of Sandia National Laboratories’ smart collar detecting a leak from a carbon dioxide storage reservoir. (Animation by Max Schwaber) Members of the media can download and use the animation.

Carbon sequestration is the process of capturing CO2 — a greenhouse gas that traps heat in the Earth’s atmosphere — from the air or where it is produced and storing it underground. However, there are some technical challenges with carbon sequestration, including making sure that the CO2 remains underground long term. Sandia’s wireless device pairs with tiny sensors to monitor for CO2 leaks and tell above-ground operators if one happens — and it lasts for decades.

“The world is trying a whole lot of different ways to reduce the production of CO2 to mitigate climate change,” said Andrew Wright, Sandia electrical engineer and project lead. “A complementary approach is to reduce the high levels of CO2 in the atmosphere by collecting a good chunk of it and storing it deep underground. The technology we’re developing with the University of Texas at Austin aims to determine whether the CO2 stays down there. What is special about this technology is that we’ll be monitoring it wirelessly and thus won’t create another potential path for leakage like a wire or fiber.”

In carbon sequestration, CO2 would typically be stored 3,000 to 12,000 feet below the surface in an area that once contained oil, gas or water, Wright said. A hole would be bored down through an impermeable layer of rock called cap rock that can prevent CO2 from percolating up toward the surface. Pressurized CO2 heated to around 175 degrees Fahrenheit would be pumped down this borehole. In some cases, it will be heated up to prevent it from freezing when it expands into the area, Wright said. Once the storage area is full, the borehole would be plugged, and in some cases, the trapped CO2 would react with the rock and bind permanently.

The team, led by geoscientist David Chapman at UT Austin, plans to embed glitter-sized CO2 sensors, about an 1/8 of an inch by an 1/8 of an inch, in the concrete surrounding the borehole, above and below the cap rock layer. Electrical engineer Axel Scherer at the California Institute of Technology is leading the group making the glitter-sized CO2 sensors. Chemist Jeff Mecham at the Research Triangle Institute is leading the group making a coating to protect the sensors from the harsh environment of concrete, while still allowing CO2 to reach the sensors.

Sandia’s role is to make an electronic device that charges the CO2 sensors, receives information from them about the presence or absence of CO2 and sends that information up to operators at the surface. This device, called a smart collar, needs to work for 20 to 40 years, Wright said.

“There’s no power or battery in your credit card,” Wright said. “Instead, when you tap it onto the reader at the supermarket, the reader energizes the chip. The chip relays some information to the reader, and that’s what allows you to buy your groceries.”

One of the biggest technical challenges the team had to overcome was the fact that RFID chips aren’t designed to be embedded in concrete, said Alfred Cochrane, another Sandia electrical engineer on the project.

The Sandia team has also tested powering and communicating with their smart collar prototype through 160 feet of commercially available wired pipe. This pipe has coaxial cable, very similar to that used in cable TV, embedded within it, so that the system won’t need any other wires or cables that could introduce new escape routes for the CO2, Cochrane said.

While the focus of this project is on carbon sequestration, the technology could also be used to monitor storage areas for natural gas or even hydrogen, Wright said.

“There’s way too much CO2 in the atmosphere right now and it’s only getting worse,” Cochrane said. “Along with all the other technologies like renewable energy, carbon sequestration is an active approach to mitigating climate change. If you capture carbon from a coal-fired power plant or a cement plant and store it indefinitely, you could make those processes carbon neutral or even allow us to go carbon negative and remove more CO2 than we emit.”

The project is funded by the Department of Energy and managed by the Office of Fossil Energy and Carbon Management and the National Energy Technology Laboratory.