ALBUQUERQUE, N.M. — Supercooled  water sounds smooth enough to be served at espresso bars, but instead it hangs out in Earth’s atmosphere, unpredictably freezing on airplane wings and hampering the simulations of climate theorists.

To learn more about this unusual state of matter, Sandia National Laboratories atmospheric scientist Darielle Dexheimer and colleagues have organized an expedition to fly huge tethered balloons in Alaska this coming winter, where temperatures descend to 40 degrees below zero and it’s dark as a dungeon for all but a few hours of the day.

“We’ll start in November and see how it goes,” she said.

Supercooled liquid water is pure water that remains a liquid below its normal freezing point because it has nothing to nucleate around.

The idea is to gain a large dataset about it, uncollected elsewhere, to fine-tune the accuracy of climate models and reduce the number of  ice-delayed flights and crashes. The team collected data from tethered balloons in Alaska last year, but didn’t operate later than October. 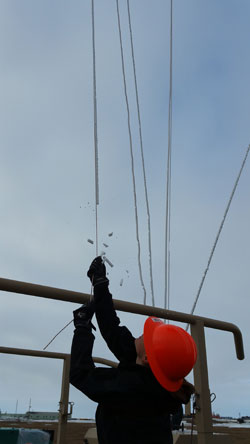 Ice pops from a balloon’s tether line as Sandia National Laboratories researcher Darielle Dexheimer gathers in an instrumented balloon at the Atmospheric Radiation Measurement research station at Oliktok Point, Alaska. The balloon is about 25 feet above Dexheimer’s head and the lines are completely iced over. (Photo courtesy of Darielle Dexheimer) Click on the photo for a high-resolution image.

The team will wrest more data about the presence and behavior of supercooled liquid water where it is most plentiful and at a location most crucial to climate modelers: Oliktok Point at the tip of oilfields of Prudhoe Bay, one of the northernmost points of the United States.

“Supercooled liquid water freezes on impact with aircraft and presents a hazard to aviation,” said Dexheimer. “The potential for aircraft icing is difficult to model because its extent is typically reported in PIREPs [pilot reports] that are subjective and vary in space and time and from aircraft that are typically attempting to avoid icing. Acquiring in situ icing data in clouds, through use of tethered balloons, eliminates many risks associated with manned research aircraft acquiring that data. These datasets will allow us to better characterize supercooled liquid water in the Arctic for climate modeling and icing research.”

For climate models, there’s not much data about how much liquid and ice are in the Arctic clouds, when and where clouds form, the altitudes at which they hover or how long they last. Clouds containing a lot of liquid in the Arctic are important, as they can act as blankets to warm the surface. Data about the vertical location and concentration of supercooled liquid water in clouds will help atmospheric scientists better understand how these clouds persist for days even though they contain all three phases of water — liquid, ice and supercooled.

The balloon itself presents another challenge. “These 13-foot-tall balloons can easily lift a person, so we need to stay focused,” said Dexheimer. Ice is expected to form on the balloon and its tether; up to 50 pounds of ice has accumulated on a balloon after a flight through the clouds. The balloon can also be difficult to control in high winds, and the team won’t launch in wind speeds above 25 mph (approximately 22 knots).

The problem isn’t theoretical. In the relatively balmy weather in late July, an unexpected gust of wind broke a helium-filled balloon free of its tether. It drifted north across the Beaufort Sea, dropping into the water roughly 60 miles north of the research base at Oliktok Point.

This didn’t dampen Dexheimer’s ambition to find out more about climate. “With data from our instrument-laden balloons and their tethers, we can sample in situ for long periods of time — maybe the entire life cycle of a cloud layer, and hopefully use that data to parameterize climate models,” Dexheimer said. “The models currently represent the arctic surface as colder and more stable than it should be in the winter, which results in fewer and shorter duration low clouds than are really happening.”

A large winch spools out the tether at a steady pace, letting the helium-filled balloon rise slowly through the bottom, middle and top of the clouds, before the team slowly takes it back down to Earth. 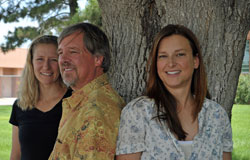 “Because our sensor data resolution takes place every meter along the tether and we take temperature readings every 30 seconds, we can measure an almost continuous temperature profile along the entire length of the tether during flight,” she said. “We’ll have a large dataset that isn’t being collected elsewhere that will improve our understanding of cloud processes and hopefully improve the accuracy of climate model output.”

Said Sandia climate modeler Erika Roesler, “High enough concentrations of liquid water in clouds can warm the surface of the Arctic through emission of thermal radiation. As the Arctic continues to warm, models will most likely — but not necessarily — predict that 30 years from now there will be less ice and more liquid in clouds when compared to today’s Arctic atmosphere. Data that Dari is taking will give us a reference point of today for the future and help inform regional climate model predictions.”

Sandia science liaison Joe Hardesty added, “One of the biggest gaps in understanding cloud formation and stability is how the various processes result in persistent seasonal clouds in the Arctic. Supercooled liquid water that switches state to ice, ice nucleation, temperature inversions where clouds become warmer at the top and colder at bottom, and turbulent air flow are all important drivers of cloud formation and behavior.”

That’s why Sandia researchers work with the Department of Energy’s Atmospheric Radiation Measurement (ARM) program and partners at the National Oceanic and Atmospheric Administration, the University of Alaska and NASA to generate useful data.

The work is sponsored through the ARM Program of DOE’s Office of Science.