Appointees to the prestigious fellowships are given the latitude to pursue their own ideas, rather than being trained by fitting into the research plans of more experienced researchers. To give wings to this process, the four annual winners — two for each category – are 100 percent pre-funded for three years. This enables them, like bishops or knights in chess, to cut across financial barriers, walk into any group and participate in work by others that might help illuminate the research each has chosen to pursue.

Truman wrote to the president of Bell Labs that he had an opportunity, in managing Sandia in its very earliest days, to perform “exceptional service in the national interest.” The President Harry S. Truman Fellowship in National Security Science and Engineering could be said to assert Sandia’s intention to continue to fulfill Truman’s hope.

The Jill Hruby Fellowship in National Security Science and Engineering offers the same pay, benefits and privileges as the Truman. It honors former Sandia President Jill Hruby, the first woman to direct a national laboratory. While “all qualified applicants will be considered for this fellowship,” and its purpose is to pursue independent research to “develop advanced technologies to ensure global peace,” another aim is to develop a cadre of women in the engineering and science fields who are interested in technical leadership careers in national security.

To help speed the emergence of quantum computers as important research tools, Alicia Magann is working to create a “quantum information science toolkit.” These modeling and simulation algorithms should enable quantum researchers to “hit the ground running with meaningful science” as quantum computing hardware improves, she says. 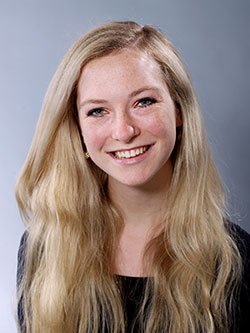 Alicia Magann will explore the possibilities of quantum control in the era of quantum computing during her Truman fellowship at Sandia National Laboratories. (Photo courtesy Alicia Magann) Click on the thumbnail for a high-resolution image.

Her focus will extend aspects of her doctoral research at Princeton University to help explore the possibilities of quantum control in the era of quantum computing.

At Sandia, she will be working with Sandia’s quantum computer science department to develop algorithms for quantum computers that can be used to study the control of molecular systems.

“I’m most interested in probing how interactions between light and matter can be harnessed towards new science and technology,” Magann said. “How well can we control the behavior of complicated quantum systems by shining laser light on them? What kinds of interesting dynamics can we create, and what laser resources do we need?”

A big problem, she says, is that “it’s so difficult to explore these questions in much detail on conventional computers. But quantum computers would give us a much more natural setting for doing this computational exploration.”

Her mentor, Mohan Sarovar, is “an ideal mentor because he’s knowledgeable about quantum control and quantum computing — the two fields I’m connecting with my project.”

During her doctoral research, Magann was a DOE Computational Science Graduate Fellow and also served as a graduate intern in Sandia’s extreme-scale data science and analytics department, where she heard by word of mouth about the Truman and Hruby fellowships. She applied for both and was “thrilled to be interviewed and thrilled to be awarded the Truman.”

When people mentioned the idea to Gabe Shipley about applying for a Truman fellowship, he scoffed. He hadn’t gone to an Ivy League school. He hadn’t studied with Nobel laureates. What he had done, by the time he received his doctorate in electrical engineering from the University of New Mexico in 2021, was work at Sandia for eight years as an undergraduate student intern from 2013 and a graduate student intern since 2015. He wasn’t sure that counted. 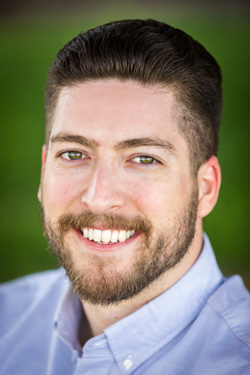 Gabriel Shipley, who broadened the use of a small pulsed power machine called Mykonos in a past internship, plans to investigate the origins and evolution of 3D instabilities in pulsed-power-driven implosions at Sandia National Laboratories’ powerful Z machine during his Truman fellowship. (Photo courtesy of Gabe Shipley)  Click on the thumbnail for a high-resolution image.

“The candidates for the Truman are rock stars,” Shipley told colleague Paul Schmit. “When they graduate, they’re offered tenure track positions at universities.”

Schmit, himself a former Truman selectee and in this case a walking embodiment of positive reinforcement, advised, “Don’t sell yourself short.”

That was good advice. Shipley needed to keep in mind that as a student, he led 75 shots on Mykonos, a relatively small Sandia pulsed power machine, significantly broadening its use. “I was the first person to execute targeted physics experiments on Mykonos,” he said. He measured magnetic field production using miniature magnetic field probes and optically diagnosed dielectric breakdown in the target.

He used the results to convince management to let him lead seven shots on Sandia’s premier Z machine, an expression of confidence rarely bestowed upon a student. “I got amazing support from colleagues,” he said. “These are the best people in the world.”

Among them is theoretical physicist Steve Slutz, who theorized that a magnetized target, preheated by a laser beam, would intensify the effect of Z’s electrical pulse to produce record numbers of fusion reactions. Shipley has worked to come up with physical solutions that would best embody that theory.

With Sandia physicist Thomas Awe, he developed methods that may allow researchers to scrap external structures called Helmholtz coils to provide magnetic fields and instead create them using only an invented architecture that takes advantage of Z’s own electrical current.

His Truman focus — investigating the origins and evolution of 3D instabilities in pulsed-power-driven implosions — would ameliorate a major problem with Z pinches if what he finds proves useful. Instabilities have been recognized since at least the 1950s as weakening pinch effectiveness. They currently limit the extent of compression and confinement achievable in the fusion fuel. Mitigating their effect would be a major achievement for everyone at Z and a major improvement for every researcher using those facilities.

Shipley has authored articles in the journal Physics of Plasmas and provided invited talks at the Annual Meeting of the APS Division of Plasma Physics and the 9th Fundamental Science with Pulsed Power: Research Opportunities and User Meeting. His most recent publication in Physics of Plasmas, “Design of Dynamic Screw Pinch Experiments for Magnetized Liner Inertial Fusion,” represents another attempt to increase Z machine output.

Sommer Johansen received her doctorate in physical chemistry from the University of California, Davis, where her thesis involved going backward in time to explore the evolution of prebiotic molecules in the form of cyclic nitrogen compounds; her time machine consisted of combining laboratory spectroscopy and computational chemistry to learn how these molecules formed during the earliest stages of our solar system. 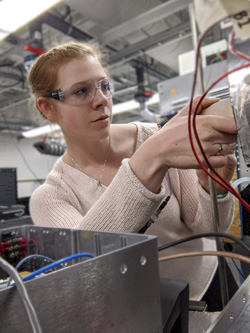 Sommer Johansen aims to improve models that demonstrate how burning bio-derived fuels affect the Earth’s planetary ecology and severe forest fires caused by climate change during her Hruby fellowship at Sandia National Laboratories. (Photo courtesy of Sommer Johansen) Click on the thumbnail for a high-resolution image.

“Cyclic nitrogen-containing organic molecules are found on meteorites, but we have not directly detected them in space. So how were they formed and why haven’t we found where that happens?” she asked.

That work, funded by a NASA Earth and Space Science Fellowship, formed the basis of publications in The Journal of Physical Chemistry and resulted in the inaugural Lewis E. Snyder Astrochemistry Award at the International Symposium on Molecular Spectroscopy. The work also was the subject of an invited talk she gave at the Harvard-Smithsonian Center for Astrophysics Stars & Planets Seminar in 2020.

At Sandia, she intends to come down to Earth, both literally and metaphorically, by experimenting at Sandia’s Combustion Research Facility in Livermore on projects of her own design.

She hopes to help improve comprehensive chemical kinetics models of the after-effects on Earth’s planetary ecology of burning bio-derived fuels and the increasingly severe forest fires caused by climate change.

“Every time you burn something that was alive, nitrogen-containing species are released,” she says.  However, the chemical pathways of organic nitrogen-containing species are vastly under-represented in models of combustion and atmospheric chemistry, she says. “We need highly accurate models to make accurate predictions. For example, right now it isn’t clear how varying concentrations of different nitrogenated compounds within biofuels could affect efficiency and the emission of pollutants,” she said.

Johansen will be working with the gas-phase chemical physics department, studying gas-phase nitrogen chemistry at Sandia’s Livermore site under the mentorship of Lenny Sheps and Judit Zádor. “UC Davis is close to Livermore, and the Combustion Research Facility there was always in the back of my mind. I wanted to go there, use the best equipment in the world and work with some our field’s smartest people.”

She found particularly attractive that the Hruby fellowship not only encouraged winners to work on their own projects but also had a leadership and professional development component to help scientists become well-rounded. Johansen had already budgeted time outside lab work at UC Davis, where for five years she taught or helped assistants teach a workshop for incoming graduate students on the computer program Python. “We had 30 people a year participating, until last year (when we went virtual) and had 150.”

The program she initiated, she says, “became a permanent fixture in my university.”

As Alex Downs completed her doctorate at the University of California, Santa Barbara, in August 2021, she “liked” Sandia on LinkedIn. The Hruby postdoc listing “happened to show up,” she said, and it interested her. She wanted to create wearable biosensors for long duration, real-time molecular measurements of health markers that would be an ongoing measurement of a person’s well-being. This would lessen the need to visit doctors’ offices and labs for evaluations that were not only expensive but might not register the full range of a person’s illness. 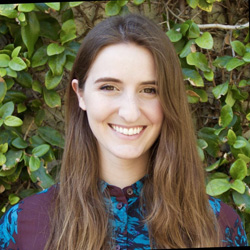 Alex Downs hopes to create wearable biosensors that gather real-time molecular measurements from health markers and would lessen the need to visit doctors’ offices and labs for evaluations during her Hruby fellowship at Sandia National Laboratories. (Photo courtesy of Alex Downs) Click on the thumbnail for a high-resolution image.

She thought, “There’s a huge opportunity here for freedom to explore my research interests. I can bring my expertise in electrochemistry and device fabrication and develop new skills working with microneedles and possibly other sensing platforms.” That expertise is needed because a key problem with wearable biosensors is that in the body, they degrade. To address this, Downs wants to study the stability of different parts of the sensor interface when it’s exposed to bodily fluids, like blood.

“I plan not only to make the sensors longer lasting by improved understanding of how the sensors are impacted by biofouling in media, I will also investigate replacing the monolayers used in the present sensor design with new, more fouling resistant monolayers,” she said.

The recognition element for this type of biosensor are aptamers — strands of DNA that bind specifically to a given target, such as a small molecule or protein. “When you add a reporter to an aptamer sequence and put it down on a conductive surface, you can measure target binding to the sensor as a change in electrochemical signal,” she said.

The work fits well with Sandia’s biological and chemical sensors team, and when Downs came to Sandia in October, she was welcomed with coffee and donuts from her mentor Ronen Polsky, an internationally recognized expert in wearable microneedle sensors. Polsky introduced her to other scientists, told her of related projects and discussed research ideas.

“Right now, meeting with people all across the Labs has been helpful,” she said. “Later, I look forward to learning more about the Laboratory Directed Research and Development review process, going to Washington, D.C. and learning more about how science policy works. But right now, I’m mainly focused on setting up a lab to do the initial experiments for developing microneedle aptamer-based sensors,” Downs said.