ALBUQUERQUE, N.M. — The Arctic is undergoing rapid change, with sea ice melting and temperatures rising at a faster pace than anywhere else in the world. Its changing environment affects global security, politics, the economy and the climate. 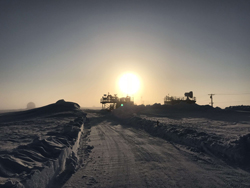 Sandia National Laboratories manages two facilities on the North Slope of Alaska as part of the Atmospheric Radiation Measurement program, a national scientific user facility. (Photo by Fred Helsel) Click on the thumbnail for a high-resolution image.

Understanding these changes is crucial for shaping and safeguarding U.S. security in the future, Sandia scientists say.

Sandia and the University of Alaska Fairbanks recently signed an umbrella Cooperative Research and Development Agreement to study these changes and partner on basic science, energy and security research in the Arctic.

“For the last 40 to 50 years, the Arctic environment has been changing at twice the pace of what’s happening globally, and during the last 20 years, it’s accelerated to three times the pace,” Joe Hardesty, a Sandia earth sciences engineer, said. “Those changes don’t stop in the Arctic. Historically, when we’ve had more opening of ocean systems in the Atlantic and the Pacific, major change and shifts in socio-economic and political power have happened around the globe, and we wouldn’t necessarily expect the Arctic to be different.”

The agreement runs the gamut of projects, from working toward a comprehensive multi-agency research facility that tackles overarching Arctic issues, supporting Alaskan resilience against natural disasters and the harsh environment, studying the suitability of renewable energy and microgrids for the Arctic environment, flying tethered balloons and drones to measure atmospheric temperatures and collaborating on satellite sensing, detection and nonproliferation work.

“There are a lot of concerns in science, security and energy stability where Sandia’s capabilities are complementary or distinct from the university’s, and this partnership is an opportunity for us to help the U.S. manage the risks and responsibilities that come with the changes in the Arctic,” said Lori Parrott, a Sandia atmospheric sciences manager. “The opening up of sea ice is going to lead to concerns for border security. As a country, we must consider how to ensure that our fourth coast is as secure as our other coasts.”

Sandia manages two facilities at sites on the North Slope of Alaska as part of the Atmospheric Radiation Measurement (ARM) program, a national scientific user facility funded through the Department of Energy’s Office of Science. Sandia also manages two areas of controlled airspace from the Alaska north coast toward the North Pole on behalf of the Department of Energy, which provides opportunities for scientific testing and technology evaluation over the Arctic Ocean. The University of Alaska Fairbanks, a public university, does extensive research on such Arctic issues as permafrost, coastal erosion, sea ice, search and rescue operations, glaciers, remote energy systems and more. The university’s Geophysical Institute contains the Alaska Center for Unmanned Aircraft Systems Integration, a research center that develops, tests and ultimately exploits emerging unmanned aircraft technology and its uses, with a special emphasis on the Arctic and sub-Arctic regions.

“We have a shared interest in the Arctic and Arctic science,” said Nettie LaBelle-Hamer, a University of Alaska Fairbanks researcher. “It’s part of our DNA here at UAF. Arctic-related science and infrastructure collaboration on the researcher level have been pretty successful between Sandia and UAF over the years, and this CRADA is helping us grow that. We have a lot in common, and as projects move forward, we’ll be better together.”

The partnership is in early stages, but work has already begun on a variety of projects:

The new partnership between Sandia and the University of Alaska Fairbanks will be discussed at Alaska National Lab Day May 30-31 in Fairbanks. The event will feature a variety of speakers from the Department of Energy’s national laboratories, plus Alaska academia and industry. The event will highlight partnerships and opportunity for collaboration on national security, science and energy research.