Warning Area in Arctic airspace to aid research and exploration

ALBUQUERQUE, N.M. — A  700-mile-long airspace that stretches north from Oliktok Point — the northernmost point of Alaska’s Prudhoe Bay — to about 400 miles short of the North Pole has been put under the stewardship of Sandia National Laboratories by the U.S. Department of Energy (DOE) and the Federal Aviation Administration (FAA). 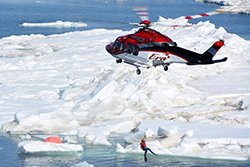 A helicopter crew lowers a swimmer into the Arctic Ocean during a search-and-rescue exercise near Oliktok Point, Alaska, July 13, 2015. The exercise, which involved unmanned aircraft systems and multiple participants, took place in the warning area under the stewardship of Sandia National Laboratories. (Photo by Coast Guard Petty Officer 2nd Class Grant DeVuyst) Click on the thumbnail for a high-resolution image.

Oliktok Point is a base of operations for the Atmospheric Radiation Measurement (ARM) Climate Research Facility, a multi-platform scientific user facility with instruments at fixed and varying locations around the globe for obtaining continuous field measurements of atmospheric data.

It was clear, for example, that tethered sensor-laden balloons hanging invisibly in a low cloud in unmarked airspace would present a danger to aircraft, particularly the many small and privately operated aircraft in Alaska.

Ivey and Sandia colleagues worked closely with DOE Office of Science program managers to secure formal approval for a block of FAA special-use air space. On May 28, FAA published notice of Warning Area W-220. The authorization rewarded five years of patient work by Ivey and others.

“In 2004, we were granted a 4-mile-diameter restricted area around Oliktok Point, ARM’s base of operations for atmospheric measurements,” Ivey said. Restricted areas are established in U.S. airspace; warning areas apply to international airspace. The restricted area was renewed in 2010, but Ivey said researchers saw the possibility of more extensive, ongoing experiments, with renewed interest in operating offshore.

So Ivey, along with his predecessor, retired Sandia climate researcher Bernie Zak, applied and reapplied, revised and reapplied again on behalf of DOE to be granted the larger airspace, which extends over international waters and provides a significant safety margin to experimenters by warning pilots who might be considering entering the area. 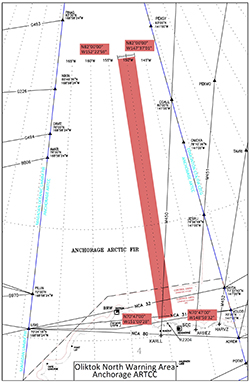 The red bar depicts the 40-mile-wide, 700-mile-long warning airspace now under management by Sandia National Laboratories personnel for DOE’s Atmospheric Radiation Measurement facilities. The space extends from a northern point of the U.S. highway system to 400 miles short of the North Pole. The monitored space will better ensure the safety of climate and other experiments over international waters in the Arctic. (Image courtesy of Sandia National Laboratories) Click on the thumbnail for a high-resolution image.

The FAA’s hesitation, Ivey said, wasn’t arbitrary. “The FAA looks at these requests pretty carefully because if they didn’t, the whole country could soon be carved up into restricted air space, making flying a nightmare,” he said.

Barrow, the other hub of activity for ARM’s team on the North Slope of Alaska, was too busy an aviation area to be considered for special-use air space. But even at remote Oliktok Point, pilots protested at a meeting hosted by the FAA, Ivey said. “They said there’s roughly 1,000 miles of coastline in the Alaskan Arctic with only two instrumented airports, Deadhorse and Barrow. ‘Look what you’re doing,’ they said. ‘These two instrumented airports are on either side of your proposed warning area. Suppose a pilot has a problem and one airport is fogged in; how does the pilot get to the other airport?’”

To solve the problem, the warning area was divided into 16 areas: eight horizontal strips in two vertical layers. One vertical layer extends from zero to 2,000 feet, and the other from 2,000 feet to 10,000 feet. For further ease of travel, eight subdivisions extend south to north. “That created a smaller set of fences that people can get around if they need to,” Ivey said. “We also worked out how pilots could contact us to find out where current research activities were located.”

Another question was whether the warning area boundaries should follow longitudinal lines, so the area would shrink as it approached the Pole, dovetailing with Canada and Russia. After discussion, the area was set at 40 miles across, and stops short of the Pole to avoid intruding on the airspace of other countries.

“I saw gaining the warning area as a big win for ARM facilities, because it opens up the Arctic for new Office of Science research efforts,” said Ivey. “It makes it possible to do things out there that wouldn’t be possible to do otherwise.”

DOE describes the facility as “hosting a research campaign designed to demonstrate how small, low-cost, unmanned aerial systems can be used to study and measure clouds and aerosols in the cold and harsh Arctic atmosphere.”

Sandia, which leads the implementation of ARM’s Arctic research efforts, now manages Oliktok Point for the Office of Science and the ARM facility because, Ivey said, “the FAA awards special-use airspace only to other federal agencies.” 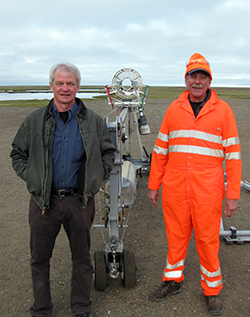 Sandia researcher Mark Ivey, left, and Sandia safety-basis engineer Al Bendure stand next to a folded SkyHook unmanned-aircraft catcher at Oliktok Point. The Arctic tundra stretches out behind them. (Photo courtesy of Brian O’Kronley, Fairweather LLC) Click on the thumbnail for a high-resolution image.

“The Coast Guard is concerned about search-and-rescue in the Arctic; they haven’t had a year-round presence there but they’re interested,” said Ivey. “What’s changed in recent years is a lot of near-shore oil exploration and production activity, including helicopter operations.”

For the July exercise, Coast Guard Cutter Healy deployed two search-and-rescue targets for the UAS to locate a six-person life raft and Thermal Oscar, an RDC-developed floating dummy outfitted with a heat source that makes it visible to infrared sensors. The UAS launched from Oliktok Point and flew out to the warning area via an altitude reservation established by the FAA. Control of the UAS was passed to operators on CGC Healy to execute a search to locate the targets. Once the UAS was over the targets, the Healy passed their position to manned aircraft on shore and guided the aircraft in for recovery efforts.

“It’s testing rescue communications, among other things. Here on the North Slope, we don’t have the satellite coverage or the infrastructure of the lower 48,” said Ivey. “Somewhere offshore, Insitu/Boeing passed control of ScanEagle to someone on the Healy, which is a big deal in the drone world, takes nontrivial technology and could be important in future search and rescues.”

“And the whole event took place as safely as possible within this new warning area,” Ivey concluded.

For more information on the new airspace designation, see ARM’s recent post. The ARM Climate Research Facility is a user facility funded through DOE’s Office of Science. The ARM facility is operated by nine DOE national laboratories, including Sandia, which manages ARM’s activities at the Oliktok site.