Today’s Compact Linear Fresnel systems use water or oil as the thermal fluid to capture heat from solar collectors. The hot fluid heats water and converts it into superheated steam to drive a turbine connected to a generator that produces electricity.

With significant input from Sandia researchers, AREVA Solar designed the 100-foot-tall A-frame structure and Compact Linear Fresnel Reflectors, which are mirrors arranged in rows at ground level. The goal is to explore a different technology to collect and store heat generated by the reflectors in molten salt. If the system proves to be efficient and effective, AREVA will consider the technology for its solar plants around the world. 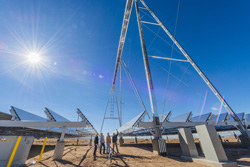 A team of Sandia National Laboratories and AREVA engineers examine the focal point of the sunlight reflected from the rows of mirrors on the ground. (Photo by Randy Montoya) Click on the thumbnail for a high-resolution image.

“Our goal is to demonstrate the viability and performance of a Linear Fresnel system that uses molten salt as a working fluid, thus allowing us to offer steam at higher temperatures (up to 585 degrees Celsius, or 1,085 degrees Fahrenheit) and also deliver a cost-competitive storage solution for concentrating solar power projects,” said Robert Gamble, general manager, North America at AREVA Solar.

AREVA Solar approached Sandia because of its unique Molten Salt Test Loop and Sandia researchers’ accompanying expertise. The $10 million Molten Salt Test Loop, known as MSTL, was completed in late 2012 and is the only test facility in the nation that can provide real concentrating solar power plant conditions and collect data to help companies make commercial decisions. Sandia researchers have been testing components for external customers and have developed the expertise to help design and conduct experiments.

“A customer can come to us with an idea, and we have the knowledge to help them shape that idea into a working test,” said Sandia engineer Bill Kolb. “In the world of molten salt, this is where you come for expertise.”

Compact Linear Fresnel Reflectors are attractive because they can generate a large amount of heat cost-effectively, using a comparatively small land area. The mirrors are aligned to focus the sun’s reflected light at the top of the structure, which houses stainless steel receiver tubes through which the molten salt is pumped and then returned to a hot tank of salt, which can be used later to produce electricity. The receiver tubes are at the focal point of the series of mirrors, and an additional set of mirrors across the top of the tubes captures and refocuses any sunlight that does not directly hit the tubes, taking advantage of all available sunlight.

“This really is based on an industry need for thermal storage, so what we have here is a proof-of-concept demonstration project, aimed at an industry need. The idea is all the feedback and lessons we learn will be fed into our optimized design for the power industry,” said AREVA’s lead project engineer Antoine Bera. 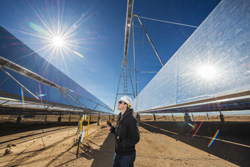 Steve Sellers of AREVA Solar stands amid the Compact Linear Fresnel Reflectors, the mirrors that focus sunlight to the top of the structure where molten salt is flowing. The resulting heat is stored and used later when the sun is not shining. (Photo by Randy Montoya) Click on the thumbnail for a high-resolution image.

In the early days of concentrating solar power, the industry was focused on generating steam to turn turbines, and there was not much demand for thermal storage. Today, as the technology evolves, more companies are incorporating thermal storage into their designs. Molten salt is increasingly the medium of choice because it is affordable and abundant and stores thermal energy for long periods of time, providing greater flexibility for the electric grid.

“This is enabling technology and is providing a path to the DOE’s SunShot goals. Essentially, molten salt allows dispatchable electrical energy and reduces the levelized cost of energy, which is the advantage of using molten salt technology,” said Subhash L. Shinde, manager of Sandia’s Concentrating Solar Technology department. The DOE SunShot Initiative is a national collaborative effort to make solar energy cost-competitive with other forms of electricity by the end of the decade.

Turning to Sandia was an easy choice, Gamble said. “Sandia’s first-of-a-kind Molten Salt Test Loop, along with leading molten salt expertise, made it an obvious choice. Shared lessons learned and expert reviews from Sandia’s molten salt experience in the fields of circulating molten salt, testing valves, instruments, and freeze/thaw cycles have helped drive decisions in AREVA’s research and design for molten salt and have proved the great value of this partnership,” he said.

The construction portion of the project was led by Sandia Facilities Project Manager Scott Rowland and his team. “This was a big undertaking, from a technical and contractual standpoint,” Rowland said. “The customer, AREVA, was also the design team for the project. Our goal was to take molten salt from the facility and create a piping system 100 feet in the air with a football field of mirrors below to heat it even further. AREVA’s previous installations had been done with water and steam so this was a design modification to their system.”

The construction, commissioning, start-up and initial testing have been completed, with further testing scheduled to begin soon.