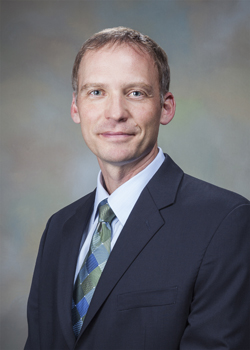 ALBUQUERQUE, N.M. — Don Susan, a researcher in Sandia National Laboratories’ Metallurgy and Materials Joining organization, has been named a fellow of ASM International in recognition of distinguished contributions to materials science and engineering.

The citation from the society said Susan received the honor, one of the highest in the field of materials, for “sustained contributions in the areas of physical metallurgy and joining research, materials characterization and failure analysis.”

The 22 members of ASM’s 2016 class of fellows will be honored at the society’s annual awards dinner Oct. 25 in Salt Lake City during the Materials Science & Technology 2016 conference. ASM International was founded in 1913 as the American Society for Metals.

Susan, who joined Sandia in 2000, said the award recognizes a broad range of work during his career. Areas of expertise include hermetic connector technology, tin-lead and lead-free solder metallurgy, active brazing alloys, electrical contact alloy metallurgy, high strength stainless steels, metallography and quantitative image analysis and failure analysis. He is a co-inventor on work that led to a patent on glass-ceramic to metal sealing for high-temperature, high-pressure applications.

“I have a lot of diverse interests and I’m glad to be recognized by ASM as a generalist in metallurgy,” he said.

Susan’s current research focuses on equal channel angular extrusion of iron-cobalt-based soft magnetic alloys. He also has worked on shape-changing alloys and was principal investigator for a three-year Laboratory Directed Research and Development project to create high-temperature shape-memory alloys. Over the years he worked on numerous teams conducting materials research and component evaluations that helped ensure the safety, security and reliability of the nation’s nuclear weapons stockpile.

Fellows serve as advisers to ASM to enhance its standing as a leading organization for materials and provide a resource to serve the worldwide community of materials scientists and engineers in the years ahead. ASM International established the honor in 1969 to recognize fellows’ contributions and to develop a broadly based forum of technical and professional leaders to be advisers.

The society has more than 30,000 members worldwide and is the world’s largest association of metals-centric materials scientists and engineers. The society is dedicated to informing, educating and connecting the materials community to solve problems and stimulate innovation around the world.