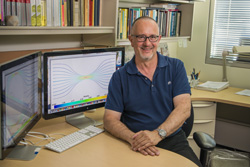 Pavel Bochev, a computational mathematician at Sandia National Laboratories, has won the Department of Energy’s Ernest Orlando Lawrence Award for his work. (Photo by Randy Montoya) Click on the thumbnail for a high-resolution image.

“This is the most prestigious mid-career honor that the Department of Energy awards,” said Bruce Hendrickson, director of Sandia’s computing research center.

Lawrence Award recipients in nine categories of science each will receive a medal and a $20,000 honorarium at a ceremony in Washington, D.C., later this year.

In the category “Computer, Information, and Knowledge Sciences,” Bochev’s work was cited for “invention, analysis, and applications of new algorithms, as well as the mathematical models to which they apply.”

Said Bochev, “I am deeply honored to receive this award, which is a testament to the exceptional research opportunities provided by Sandia and DOE. Since joining Sandia I’ve been very fortunate to interact with an outstanding group of researchers who stimulated and supported my work. These interactions, as well as funding from the Advanced Scientific Computing Research Program of DOE’s Office of Science and the ASC program of the National Nuclear Security Administration, helped shape, grow, and mature the research effort leading to this recognition.”

Said Secretary Moniz, “I congratulate the winners, thank them for their work on behalf of the department and the nation, and look forward to their continued excellent achievement.”

The Lawrence Award was established to honor the memory of Ernest Orlando Lawrence, who invented the cyclotron — an accelerator of subatomic particles — and received a 1939 Nobel Prize in physics for that achievement. Lawrence later played a leading role in establishing the U.S. system of national laboratories.

The most recent prior Sandia recipient of the Lawrence Award is Fellow Jeff Brinker, who received the honor in 2002.