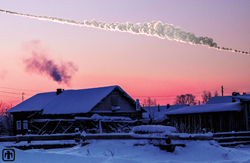 The asteroid that fell to earth near Chelyabinsk, Russia, gave scientists new insights into the risks of smaller asteroid impacts. (Simulation by Mark Boslough; rendering by Brad Carvey.) Click on the thumbnail for a high-resolution image.

ALBUQUERQUE, N.M. — Once in a lifetime, a physicist may get a chance to test his theories and simulations in a real-life event that changes the course of his scientific life. But rarely does that opportunity literally fall from the sky.

That’s the impact of the Feb. 15 asteroid that burst over the Russian city of Chelyabinsk on Sandia physicist Mark Boslough, subject of a TV documentary that airs tonight and co-author of a recent cover story in Nature about the asteroid fireball that injured about 1,500 people and damaged more than 7,000 buildings, collapsing roofs and breaking thousands of windows.

Boslough’s journey to Russia shortly after the impact is chronicled in the NOVA episode “Asteroid; Doomsday or Payday,” which will air on Public Broadcasting Service stations beginning today.

The show focuses on the destructive potential of asteroids, chronicling how Boslough and his colleagues learn that small asteroids can do far more damage than previously thought. The Nature paper also suggests that there may be more small asteroids than formerly thought.

The day the asteroid hit, Boslough learned of the event via Facebook from posts of Russian news stories and YouTube videos showing an object that exploded in the Russian sky.

“I saw it on Facebook long before the sound wave had even arrived in this part of the world,” Boslough said, estimating the transglobal sound wave took more than seven hours to reach New Mexico. “I really didn’t expect to experience this in my lifetime.”

As one of the first scientists to visit Chelyabinsk after the asteroid struck, Boslough set out to discover where the object came from. Because it came down near a populated area, he and his colleagues were able to collect videos from people who caught the asteroid on film and video, especially the ubiquitous Russian dashboard cameras, a staple in establishing blame in traffic mishaps.

“This event was certainly one of the best-documented asteroid events ever,” said Boslough.

Boslough’s goal was to perform stellar calculations of the asteroid’s trajectory by visiting — at night when the stars shone — the exact spots where the footage was recorded.

“If the stars show up on the digital camera, we can get those angles and then calibrate that image that was taken from the dash cam, and know exactly the angles to the trajectory of the fireball,” he said in the documentary. “We’ll have a very precise trajectory as it streaked through the atmosphere, so we can backtrack that to get the orbit, the pre-impact orbit.”

The program also discusses how asteroids can contain rare and valuable elements, leading researchers to seriously evaluate the benefit of harvesting them for their rare elements.

But Boslough also wants the research community to pay more attention to the potential risk that asteroids present.

“If something like the Tunguska event of 1908 happened now, it could kill hundreds of thousands or even a million people, if it happened right over a big city,” he said in the documentary. “An asteroid has more damage potential on the ground than a nuclear bomb of the same energy.”

Boslough was part of a team of 33 researchers who completed the study featured in Nature. “A 500-kiloton airburst over Chelyabinsk and an enhanced hazard from small impactors” examines the characteristics of the fireball. Boslough and his colleagues also used the simulations to help design the journal’s cover.

Using data collected from his visit shortly after the asteroid struck, along with data from an international team, Boslough developed several additional simulations that he and other researchers have used to model the explosion and estimate the force of the blast.

The paper’s authors performed a global survey of airbursts of a kiloton or more and found that the number of building-sized objects may be 10 times greater than estimates based on other methods.

The authors, led by Peter Brown of the University of Western Ontario, estimated the Chelyabinsk event was equivalent to an explosion of about 500 kilotons of TNT. At its peak, the airburst appeared to be 30 times brighter than the sun.

“Because the frequency of a strike of an asteroid of this size has exceeded expectations, with three such strikes in just over a century (Chelyabinsk, Tunguska and a large airburst in the South Atlantic in 1963 detected by infrasound), the number of similar-sized asteroids capable of causing damage may be greater than suspected,” Boslough said.

The authors also showed that previous models for estimating airburst damage do not match the observations.

An earlier paper by Boslough highlights the conclusion that most airbursts are more damaging than previously thought.

“We really have to rethink the risk from airbursts. Chelyabinsk was unusual due to the a low inclination at which it entered the atmosphere, but 90 percent of objects enter the atmosphere at a steeper angle and cause more damage on the surface,” Boslough said. That paper, which he wrote two years ago, was recently published online in Acta Astronautica.

The Chelyabinsk fireball is something those who saw it will never forget, and neither will Boslough.

“What’s amazing to me though, when you think about it, this is part of an asteroid that had been, floating through space, orbiting the sun for billions of years” he said for the documentary in a late February interview. “And two weeks ago, it exploded in the atmosphere, dropped to the ground, and here I am holding it in my hand! That’s amazing.”