ALBUQUERQUE, N.M. — Sandia National Laboratories entered into a vast array of new Cooperative Research and Development Agreements (CRADA) in the past three years, bringing dozens of new partners to the labs.

“This is a great mechanism for getting national laboratory technology into the private sector,” said Sandia CRADA specialist Jason Martinez. “We develop cutting-edge technology and capabilities with underlying science that is phenomenal. The CRADA is a vehicle to take that work and benefit the U.S. economy.” 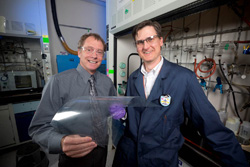 William Kurtz, left, president of IR Dynamics LLC of Santa Fe, is working with Nelson Bell of Sandia National Laboratories through a Cooperative Research and Development Agreement. IR Dynamics is developing thermochromic materials to control infrared transmission. (Photo by Norman Johnson) Click on the thumbnail for a high-resolution image.

A CRADA is an agreement between a government agency and a private company or university — or at least one non-federal entity — to work together on research and development. Sandia signed 133 during the past three fiscal years, from October 2012 to September 2015; 82 were new and 51 were amendments adding tasks or funding to existing agreements. The contract value to Sandia, which includes in-kind and government dollars, was more than $105 million.

Sandia has active CRADAs with 65 partners ranging from small businesses to nonprofits to industry giants. The labs recently executed one with a university for the first time in 15 years.

“FY 13, 14 and 15 were all record years for CRADAs, and FY16 is on track to set another one, in numbers and in value,” Martinez said. “It could be significant.” About 15 have been signed so far in FY16, one with the second-largest value on initial execution in Sandia history.

Andy McIlroy, Sandia’s director of Research Strategy and Partnerships and deputy chief technology officer, said CRADAs serve the labs’ national security mission by broadening the impact of its work through interactions with companies and other entities. “The partnerships also enrich the labs with more perspectives,” he said.

Bumper crop of companies partner with the labs

There has been no single reason for the boom, Martinez said. “It’s like farming. Sometimes there’s a bumper crop that you can’t attribute to one particular thing like the soil or the weather,” he said. “There is a cornucopia of companies and organizations that want to work with us. We’ve seen a bumper crop of CRADAs.”

A standard CRADA covers a single project in one technical area in a fixed amount of time, and an umbrella covers multiple projects and technologies over a span of time. “An umbrella is more strategic, offering the dynamic ability to do different work in different areas,” Martinez said. “One of our partners has more than 100 project and task statements over different organizations.”

The agreements are funded a variety of ways: A company pays to work with Sandia; the partners use Department of Energy work authorization funds allocated to the labs; or the funding comes from another federal agency or Laboratory Directed Research and Development, both of which fall into the in-kind category. CRADA contract values range from $50,000 to multimillions.

CRADA opportunities on the web

Sandia created an external website devoted to CRADAs. “Someone who has never heard of a Federally Funded Research and Development Center or a CRADA can visit and ascertain what the steps are,” Martinez said. And CRADA opportunities can be found on FedBizOpps, the database of federal government contracting opportunities.

Martinez said there’s a misperception that CRADAs are only for big companies. Sandia has an active CRADA portfolio with small businesses. Here are a few:

“CRADA partners benefit from 70 years and billions of dollars of taxpayer-funded research,” Martinez said. “Sandia’s research can benefit the economy in important and impactful ways. It gives the CRADA partner the seed to commercialize a technology and develop a competitive advantage within their industry.”