What do dragonflies teach us about missile defense?

ALBUQUERQUE, N.M. — Be grateful you’re not on a dragonfly’s diet. You might be a fruit fly or maybe a mosquito, but it really wouldn’t matter the moment you look back and see four powerful wings pounding through the air after you. You fly for your life, weaving evasively, but the dragonfly somehow tracks you with seemingly instant reflexes. For a moment, you think you’ve gotten away, just as it closes in swiftly from below for the kill.

Then, as the dinosaur-era predator claws into you with its spiny legs and drags you into its jaws midair, you might wonder to yourself, “How did it catch me with such a tiny brain and no depth perception?” 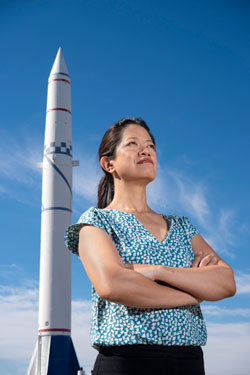 Sandia National Laboratories scientist Frances Chance, pictured here, is revealing insights into how dragonflies intercept their prey in flight, which might be useful for missile defense. (Photo by Randy Montoya) Click the thumbnail for a high-resolution image.

Sandia National Laboratories is homing in on the answer with research showing how dragonfly brains might be wired to be extremely efficient at calculating complex trajectories.

The Sandia research is examining whether dragonfly-inspired computing could improve missile defense systems, which have the similar task of intercepting an object in flight, by making on-board computers smaller without sacrificing speed or accuracy. Dragonflies catch 95% of their prey, crowning them one of the top predators in the world.

Computational neuroscientist Frances Chance, who developed the algorithms, is presenting her research this week at the International Conference on Neuromorphic Systems in Knoxville, Tennessee. Earlier this month, she presented at the Annual Meeting of the Organization for Computational Neurosciences in Barcelona, Spain.

Chance specializes in replicating biological neural networks — brains, basically — which require less energy and are better at learning and adapting than computers. Her studies focus on neurons, which are cells that send information through the nervous system.

For example, a dragonfly’s reaction time to a maneuvering prey is a mere 50 milliseconds. A human blink takes about 300 milliseconds. Fifty milliseconds is only enough time for information to cross about three neurons. In other words, to keep up with a dragonfly, an artificial neural network needs to be done processing information after only three steps — though, because brains fire lots of signals at once, each step may involve many calculations running at the same time.

Missile defense systems rely on established intercept techniques that are, relatively speaking, computation-heavy. But rethinking those strategies using highly efficient dragonflies as a model could potentially:

Dragonflies and missiles move at vastly different speeds, so it’s unknown how well this research will ultimately translate to missile defense. But developing a computational model of a dragonfly brain also could have long-term benefits for machine learning and artificial intelligence.

AI is used throughout wide-ranging industries, from self-driving transportation to prescription drug development. These fields stand to gain from highly efficient methods for constructing fast solutions to complex problems. Ongoing research at Sandia is refining Chance’s algorithms and determining where they’re most applicable.

Her research is funded by Sandia’s Laboratory Directed Research and Development program.