ALBUQUERQUE, N.M. — Sandia National Laboratories is leading the Security and Resilience area of the Department of Energy’s (DOE) Grid Modernization Laboratory Consortium (GMLC) and bringing its strong research capability in grid modernization to help the nation modernize its power grid. 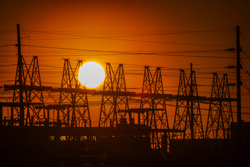 Sandia National Laboratories is leading the Security and Resilience area of the Department of Energy’s (DOE) Grid Modernization Laboratory Consortium (GLMC) to help the nation modernize its power grid. (Photo by Randy Montoya) Click on the thumbnail for a high-resolution image.

The consortium includes scientists and engineers from across 14 DOE national labs and dozens of industry, academic and state and local government partners, aligned into six technical areas. These teams come together to imagine the grid of the future and to close high-priority technology and security gaps facing the U.S. power grid as it deals with growth, disruptive operating changes and future threats. GMLC research and development will receive up to $220 million in funding over the next three years through the Office of Electricity Delivery and Energy Reliability and the Office of Energy Efficiency and Renewable Energy.

The task is not simple. The grid must deliver reliable, affordable and clean electricity to consumers where they want it, when they want it and how they want it. And it must be secure against many different types of physical and cyber intrusion threats, as well as natural disasters and severe storms and hurricanes.

“Sandia has decades of experience in physical and cybersecurity, and in providing resilience support for the power grid and some of the most critical infrastructures in the nation, such as nuclear power plants, oil and gas installations and water and transportation systems,” Torres said. “Sandia’s capabilities, coupled with assets at our partner labs, bring tremendous resources for the nation.”

“Sandia engineers and scientists are excited to be applying decades of technology leadership in national security areas to help create a modern electric grid. The GMLC is an excellent avenue to increase our technical collaborations and ensure a broad national impact for this critical work,” said Hanley.

Sandia also will support projects in New Mexico, Kentucky, Alaska and Hawaii, and will be part of broad teams on numerous other technology development projects under the GMLC program.

Ultimately, the consortium will help develop a unified grid modernization strategy for the DOE, in partnership with utilities and other grid stakeholders, and will support implementing that strategy using the strong technical and institutional knowledge and capabilities present across the national laboratory complex.