Reporters are invited to the HMTech 30th anniversary celebration hosted by Sandia’s Black Leadership Committee. To attend, contact Lindsey Kibler at (505) 331-4045 by noon Friday.
What: HMTech “30 Years of Impact: Acknowledging the Past, Celebrating the Present, and Anticipating the Future” celebration
Who: Sandia engineers and scientists and local middle school and high school students will participate in hands-on activities exemplifying the focus of Hands On, Minds On interactive learning
When: 5:30-7:30 p.m., Friday, July 29
Where: African American Performing Arts Center & Exhibition Hall, 310 San Pedro Drive NE, Albuquerque 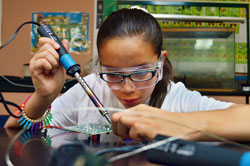 A student works on an HMTech project. HMTech began in 1986 as an after-school program at Albuquerque’s Career Enrichment Center. (Photo by Lindsey Kibler) Click on the thumbnail for a high-resolution image.

From STEM student to Sandia engineer

Sandia engineer Regina Schells knew from a young age she was going to have a career in the STEM field.

As a senior at Highland High School, she had a love for all things math. That love brought her to a classroom in Albuquerque’s Career Enrichment Center for a new after-school program — HMTech.

“In the mid-80s, there wasn’t STEM as it’s known today. It was science and engineering, but at the core of that was math — the basic principle,” said Schells. “It was the first year of HMTech and new to everyone involved, and it was just so neat. The instructors showed me how to apply math to everything and it was there that they made me feel like I want to be an engineer.” 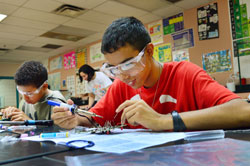 Students solder during an HMTech class. The program sponsored by Sandia National Laboratories’ Black Leadership Committee was developed to inspire African-American students to pursue STEM careers. (Photo by Lindsey Kibler) Click on the thumbnail for a high-resolution image.

Schells later volunteered with the HMTech program while studying electrical engineering at the University of New Mexico. Following graduation, she left New Mexico to begin her graduate studies — also in electrical engineering — and worked for General Motors contractor Belco Electric Inc. in Kokomo, Indiana, before returning to Albuquerque. In July 1998, Schells was hired as a research assistant with a Sandia contractor and in January 1999 was hired as a full-time Sandia engineer.

“My experience with HMTech undoubtedly had an impact on my decision to return to Albuquerque and join the Sandia team. Because the classes were taught by Sandia employees working in those particular fields, it gave me a feel for the type of work Sandia did. For 30 years the program has introduced young people to Sandia and shown them what it does. Sandia continues to reach out to all communities, which is especially important for our African-American communities,” Schells said. 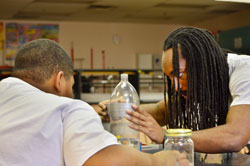 HMTech instructor Tyler Garrett, a component and tester surety engineer at Sandia National Laboratories, helps a student prepare an experiment. (Photo by Lindsey Kibler) Click on the thumbnail for a high-resolution image.

Improving educational excellence within the community

“African-Americans are underrepresented in STEM fields, so our focus is to expose them to areas they may otherwise not be exposed to,” said Shauna Adams, a subsystem and components surety engineer and HMTech committee member. “When the students see the volunteers and instructors here, they think ‘I look like them,’ which shows them they can do what we do.”

Adams has volunteered with the program for five years. She also serves as an adviser to the Greater Albuquerque National Society of Black Engineers junior chapter.

Sandia employees accounted for 90 percent of the instructors at this summer’s event, held at Albuquerque High School. The event was supported by additional volunteers from Sandia and the Albuquerque community. 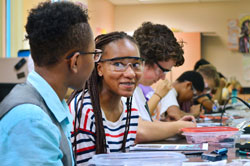 HMTech students wait for materials for an electronics and soldering project.  (Photo by Lindsey Kibler) Click on the thumbnail for a high-resolution image.

“HMTech has improved educational excellence in our community, challenging youth to enrich their minds through the fun, hands-on application of science, technology, engineering and mathematics,” said Steve Rottler, deputy laboratories director and executive vice president for national security programs. “The sky is the limit for these students who might become the next scientists and engineers, perhaps someday joining us at Sandia. The more we can expose young people to STEM fields, the better the future will be for our community and our nation.”