Big changes from a small package for hydrogen storage

LIVERMORE, Calif. — Sometimes, you have to go small to win big. That is the approach a multilab, interdisciplinary team took in using nanoparticles and a novel nanoconfinement system to develop a method to change hydrogen storage properties. 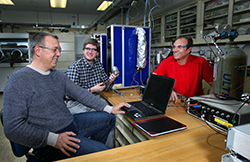 This discovery could enable the creation of high-capacity hydrogen storage materials capable of quick refueling, improving the performance of emerging hydrogen fuel cell electric vehicles. Sandia National Laboratories, Lawrence Livermore National Laboratory (LLNL), the National Institute of Standards and Technology and Mahidol University in Bangkok, Thailand, collaborated on the research, which was published Feb. 8 in the journal Advanced Materials Interfaces.

The work was funded by the Department of Energy’s (DOE) Fuel Cell Technologies Office and the Boeing Co.

Accelerating the uptake and release of hydrogen

Hydrogen fuel cell vehicles are powered by an electrochemical reaction between hydrogen and oxygen inside a fuel cell. While oxygen is provided by air, the hydrogen must be stored separately on the vehicle. Current fuel cell electric vehicles store hydrogen as a high-pressure gas.

A solid material can act like a sponge for the absorption and release of hydrogen, in chemical terms hydrogenation and dehydrogenation. Thus using such a hydrogen storage material could increase how much hydrogen can be stored.  The material must be able to store enough hydrogen for the vehicle to go at least 300 miles before refueling.

In this effort, Stavila explained, the interdisciplinary team of scientists worked closely on the synthesis, characterization and modeling to improve the properties of lithium nitride, a promising hydrogen storage sponge. The team also developed a fundamental understanding of why nanosizing improves the hydrogen storage properties of this material.

The idea came from Mahidol University graduate student Natchapol “Golf” Poonyayant, who approached Sandia with the idea of using nanoconfinement to enhance hydrogen storage reactions in nitrogen-containing compounds. Working with the Sandia researchers, Poonyayant, his adviser, Pasit Pakawatpanurut, and fellow Mahidol student Natee “Game” Angboonpong found that liquid ammonia could be used as a gentle and efficient solvent for introducing metals and nitrogen into the pockets of carbon nanoparticles, producing nanoconfined lithium nitride particles. 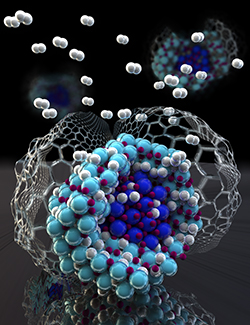 Hydrogenation forms a mixture of lithium amide and hydride (light blue) as an outer shell around a lithium nitride particle (dark blue) nanoconfined in carbon. Nanoconfinement suppresses all other intermediate phases to prevent interface formation, which has the effect of dramatically improving the hydrogen storage performance. (Photo courtesy of Sandia National Laboratories) Click on the thumbnail for a high-resolution image.

“In other words, the chemical pathways for both hydrogen absorption and release in this hydrogen storage material were dramatically changed for the better,” said Sandia chemist Lennie Klebanoff.

To better understand the mechanism responsible for this improvement, the Sandia scientists reached out to computational scientist Brandon Wood of LLNL, a leading expert in the theory of solid-state reactions. Wood and his LLNL colleagues Tae Wook Heo, Jonathan Lee and Keith Ray discovered that the reason for the unusual behavior was the energy associated with two material interfaces.

Taking the path of least resistance, the material undergoes a single-step path to full hydrogenation. Similarly, once hydrogenated, the nanoparticles release hydrogen by the lowest energy pathway available, which in this case is direct hydrogen release back to lithium nitride.

According to the Sandia and LLNL researchers, the next step is to further understand how the dehydrogenated and hydrogenated phases of lithium nitride change at the nanoscale. This is a stiff challenge to the team, as it requires imaging different chemical phases within a particle that is only several nanometers wide.

The team will draw on the capabilities within the DOE’s Hydrogen Storage Materials Advanced Research Consortium (HyMARC), led by Sandia and comprised additionally of scientists from LLNL and Lawrence Berkeley National Laboratory. The team plans to use spatially resolved synchrotron radiation from LBNL’s Advanced Light Source to probe interface chemistry and structure.

In addition, since the nanoporous carbon host is “dead weight” from a hydrogen storage perspective, the team is examining ways to “lighten the load” and find carbon materials with more nanopockets for a given carbon mass.

“We are thrilled with this technical advance and excited to take on the work ahead,” said Klebanoff. “But it’s bittersweet. Golf, who inspired this work and conducted many of the syntheses, died tragically at the age of 25 during the writing of this paper. The world has lost a talented young man and we have lost a dear friend whom we miss. This work and its published account are dedicated to Golf and his family.”