‘Iron Sun’ is not a rock band, but a key to how stars transmit energy

ALBUQUERQUE, N.M — Working at temperatures matching the interior of the sun, researchers at Sandia National Laboratories’ Z machine have been able to determine experimentally, for the first time in history, iron’s role in inhibiting energy transmission from the center of the sun to near the edge of its radiative band — the section of the solar interior between the sun’s core and outer convection zone. 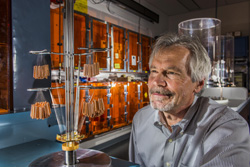 Physicist Jim Bailey of Sandia National Laboratories observes a wire array that will heat foam to roughly 4 million degrees until it emits a burst of X-rays that heats a foil target to the interior conditions of the sun. (Photo by Randy Montoya) Click on the thumbnail for a high-resolution image.

Because that role is much greater than formerly surmised, the new, experimentally derived amount of iron’s opacity — essentially, its capacity for hindering the transport of radiative energy originating in nuclear fusion reactions deep in the sun’s interior — helps close a theoretical gap in the Standard Solar Model, widely used by astrophysicists as a foundation to model the behavior of stars.

“Our data, when inserted into the theoretical model, bring its predictions more closely into alignment with physical observations,” said Sandia lead investigator Jim Bailey. His team’s work appeared Jan. 1 in the journal Nature.

The gap between the model and observations appeared in 2000 when analysis of spectra emerging from the sun forced scientists to lower their estimates of energy-absorbing elements such as oxygen, nitrogen and carbon by 30 to 50 percent.

The decreased abundances meant that the model then predicted that energy would arrive at the sun’s radiative edge more readily than before. This created a discrepancy between the star’s theoretical structure and its measured structure, which is based on variations in temperatures and densities at different locations.

To make the model once again agree with observations, scientists needed a way to balance the decreased resistance to radiation transport caused by the lowered amounts of the elements.

Bailey’s experimental group, including Taisuke Nagayama, Guillaume Loisel and Greg Rochau, in painstaking experiments spanning a 10-year period, discovered that the widely used astrophysical estimate of the wavelength-dependent opacity of iron should be increased between 30 to 400 percent. That difference does not represent a large uncertainty but rather how much iron’s opacity varies with the wavelength of the radiation.

“This represents roughly half the change in the mean opacity needed to resolve the solar problem, even though iron is only one of many elements that contribute,” the authors write in their paper.

Getting accurate data has been difficult, as “the inside of a star is one of the most mysterious places in the universe,” Bailey said. “It’s too opaque for distant instruments to see inside and analyze reactions within it, and too hot to send a probe into it. It has also been too difficult to run tests under appropriate conditions in a laboratory. So the physics that describes how atoms, embedded in solar plasma, absorb radiation, has never been experimentally tested. Yet that process dominates the way energy generated by nuclear reactions in the sun’s interior is transported to the outside.

“Fortunately, in our Z experiments, we can create temperature and density conditions nearly the same as the region inside the sun that affects the discrepancy the most — the edge of the zone where radiative energy transport dominates — in a sample that’s big enough, lasts long enough, and is uniform enough to test. We used that new capability to measure the opacity of iron, one of a few elements that plays the most important part in radiative energy transfer.”

Iron is important because, of all the elements abundant in the sun, it maintains the highest number of bound electrons essential in radiative energy transfer, and thus has a large effect on the outcome of solar models.

Still, the upward revision of opacities as a solution is bound to be controversial.

“No matter what we do, we can’t make measurements at all the different conditions we need to know,” said Nagayama. “There are 20 elements present, and a large range of temperatures and densities. We study iron because its complex electronic structure is a challenge to represent in opacity theories. And it is important in solar physics.  The sun is a test bed to model other stars. Without experimental tests, we don’t know if these models are accurate. To the extent we fail to understand the sun, then the workings of other stars are subject to some uncertainty.”

Sandia’s Z machine creates the temperature of the sun’s interior — about 2.1 million degrees —in a target about the size of a grain of sand. From that small sample, Bailey could do what theorists cannot: hold in his hand tangible evidence for the way iron atoms behave inside stars.

The target design for recent experiments involved intermingled iron and magnesium, tamped by plastic and beryllium layers on both sides. Radiation streaming through the sample heats up the iron and magnesium, which expand. The plastic restrains the expansion to keep it more uniform for opacity measurements. Magnesium provides information about corresponding density and temperature.

The work was sponsored by the National Nuclear Security Administration and the DOE Office of Science.