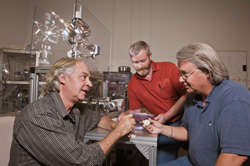 ALBUQUERQUE, N.M. — It was a figurative whack on the head that started Sandia National Laboratories distinguished technical staff member Juan Elizondo-Decanini thinking outside the box — which in his case was a cylinder.

He developed a new configuration for neutron generators by turning from conventional cylindrical tubes to the flat geometry of computer chips. For size comparison, small neutron generators, which are like mini accelerators, are 1 to 2 inches in diameter, he said.

“The idea of a computer chip-shaped neutron source — compact, simple and inexpensive to mass-produce — opens the door for a host of applications,” Elizondo-Decanini said.

The most practical, and the most likely to be near-term, would be a tiny medical neutron source implanted close to a tumor that would allow cancer patients to receive a low neutron dose over a long period at home instead of having to be treated at a hospital, he said.

“It’s really revolutionary technology,” said Stewart Griffiths, who retired in December as a senior scientist and engineer at Sandia.  “Juan’s knowledge, insights and creativity into this enabled this really big jump from today to how we might do neutron generators in the future.”

Griffiths said the impact won’t be known for years, however.

“The maturation of the technology is still needed, but if that process is successful, it will have a huge impact,” he said.

A three-year Laboratory Directed Research and Development (LDRD) project Elizondo-Decanini led demonstrated the basic technology necessary for a tiny, mass-produced neutron generator that he said can be adapted to  medical and industrial applications. He said his team is seeking funding to make sure it works reliably and can be scaled to meet needs.

Elizondo-Decanini said it all started when now-retired senior manager Mike Sjulin told researchers he needed neutrons and he didn’t care how they were produced. Before that whack on the head, Elizondo-Decanini said, “we were deep in the proverbial box, concentrating on making the cylinder more cylindrical.”

Traditionally, accelerator-based neutron generators with deuterium ion and tritium targets have operated on cylinders, which makes it easy to control the electric field and ion beam shape, he said. But that geometry also limits size, beam current and neutron output.

“Once you see it, it’s kind of obvious … but before that nobody ever thought of it,” Elizondo-Decanini said. 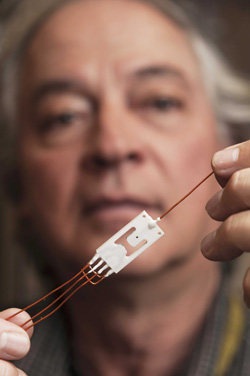 Sandia National Laboratories distinguished technical staff member Juan Elizondo-Decanini holds a prototype of a “neustristor,” a new configuration for neutron generators that turns away from conventional cylindrical tubes in favor of the flat geometry of computer chips. He said the technology is ready to be licensed for some commercial applications, but more complex commercial applications could take five to 10 years. Click on thumbnail for a high-resolution image. (Photo by Randy Montoya)

The fun began with the technology challenges that presented, he said.

The team’s first step was to discover whether it was possible to make a generator shaped like a flat computer chip with all surface-deposited components — everything from the ion source to the target, Elizondo-Decanini said.

However, he said, a cross-section diagram of the simplest diode-based neutron tube translated into the ideal surface-mounted topology, and team members knew they had the tools to design it.

The LDRD project pulled together people from all over Sandia, including design, microelectronics, materials, ceramics, precision fabrication, ion gas loading, engineering and detection calibration. After seven months of working on an ion beam lens design and an additional six months doing the necessary modeling, the team scaled things down.

The team moved from a millimeter package that looks a like a printed circuit board to a micron package to the concept of mounting the package on a computer chip. The chip configuration allows varying numbers of layers in a stack. That led to the idea of rotating those layers for radial discharge to ramp up output — a return, in a way, to the cylinder.

To illustrate that, Elizondo-Decanini pinned down one end of a sample rectangular millimeter design and rotated the free end in a circle, much like rotating a protractor.

“All of a sudden you have a cylindrical cavity like a pill box,” he said. “It’s still flat but now it looks like a pill box, and I have increased the number of neutrons by one or two orders of magnitude.” 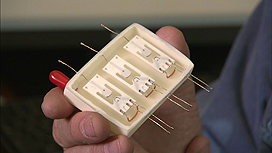 If a neutron can be produced from each bit, “that’s a neutron source that you can use almost anywhere, in medical applications, in sensors for contraband, for nonproliferation,” he said.

Elizondo-Decanini presented a paper, “Surface Mounted Neutron Generators,” at the National Nuclear Security Administration LDRD Symposium in Washington, D.C., in July 2011 as one of three featured technical speakers chosen by each of the NNSA labs to showcase their top LDRD research activity.

A patent has been filed for the millimeter-size hybrid — hybrid because everything is solid state except a vacuum gap — that would be used for neutron capture cancer therapy. In addition, the project sparked half a dozen technical advances, the team is testing micron-size neutron source arrays built using Sandia’s MicroElectricoMechanical Systems facilities, and it’s initiated commercial technology transfer work.

Elizondo-Decanini presented his work in early April at Technology Ventures Corporation’s (TVC) Deal Stream Summit’s Parade of Posters, which gives researchers an opportunity to talk with possible investors. The nonprofit TVC was founded and funded by Lockheed Martin to help commercialize technology from the national laboratories.

Elizondo-Decanini’s vision for the neutron generator of the future is one that uses no tritium and no vacuum, is made in a solid state package and is fabricated at Sandia’s Microsystems and Engineering Sciences Applications (MESA) complex.

“That has very dramatic technology implications and challenges,” he said. “But that’s what I tell people, that’s what the national labs are all about.”