ALBUQUERQUE, N.M. — Sandia National Laboratories will serve as the leading partner in one of five national research centers for quantum information science established by the Department of Energy today. 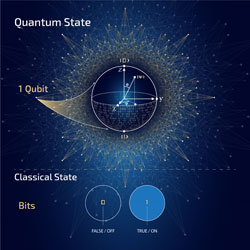 Sandia National Laboratories and fellow members of the Quantum Systems Accelerator center are collaborating to fast track advances in information science and prepare the nation’s workforce for a future quantum economy. Quantum bits of information, or qubits, have the potential to make powerful calculations that classical bits cannot. (Image by Michael Vittitow) Click the thumbnail for a high-resolution image.

The Quantum Systems Accelerator is a multidisciplinary team comprising dozens of researchers from 15 labs and universities. Together, they will collaborate to transform rudimentary quantum computers and related technologies into machines that perform valuable work for DOE and the nation. Such work could include advances in scientific computing, discoveries in fundamental physics and breakthrough research in materials and chemistry.

The new organization, led by Lawrence Berkeley National Laboratory, will receive $115 million over five years to co-design advanced algorithms, devices, and engineering solutions; foster collaboration with industry and nongovernmental organizations; and lay the groundwork to train a future workforce.

Quantum computers and other devices operate using peculiar laws of physics — quantum mechanics — that affect matter at its tiniest scales. Sandia and its partners believe these machines would perform certain calculations much faster than normal computers if they could be made to run reliably.

“The global race is on to build quantum systems that fuel discovery and make possible the next generation of information technology that greatly improves our lives. The Quantum Systems Accelerator will transform the enormous promise of quantum entanglement into an engineering resource for the nation, forging the industries of tomorrow,” said Berkeley Lab’s Irfan Siddiqi, the director of the Quantum Systems Accelerator.

The research center is established under the National Quantum Initiative Act, which was signed into federal law in 2018.

The Quantum Systems Accelerator is a multidisciplinary team of researchers across 15 labs and universities. Together, they will collaborate to transform rudimentary quantum computers and related technologies into machines that perform valuable work. (Image courtesy of the Quantum Systems Accelerator) Click the thumbnail for a higher resolution image.

“The quantum processors developed by the QSA will explore the mysterious properties of complex quantum systems in ways never before possible, opening unprecedented opportunities for scientific discovery while also posing new challenges,” said John Preskill, the Richard P. Feynman Professor of theoretical physics at the California Institute of Technology and the Quantum Systems Accelerator scientific coordinator.

Future quantum computer manufacturers, software developers, technicians, network administrators and cybersecurity professionals, to name a few, might all need some knowledge of quantum mechanics to do their jobs. But relatively few people learn about this science in school.

“The ability of the U.S. to out-innovate other countries in quantum computing depends on our most important capability — people,” said Scott Collis, director of computing at Sandia. “This makes workforce development a critical element of the new initiative to ensure that we help train the next generations of scientists and engineers who can advance and utilize advances in quantum computing.”

To cultivate this future workforce, the Quantum Systems Accelerator will create training programs for working professionals and teaching strategies for educators to bring quantum mechanics into their classrooms.

“We’d like curricula to address quantum issues and technology at an earlier stage,” Muller said. “We need to educate the workforce with what they’ll need to support the emerging quantum economy.”

Total planned funding for the center is $115 million over five years, with $15 million in fiscal year 2020 dollars and out-year funding contingent on congressional appropriations.