ALBUQUERQUE, N.M — Sandia National Laboratories is using its Ion Beam Laboratory (IBL) to study how to rapidly evaluate the tougher advanced materials needed to build the next generation of nuclear reactors and extend the lives of current reactors. 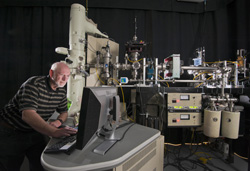 Technologist Daniel Buller stands in front of the beamline that connects the tandem accelerator to the transmission electron microscope (TEM) at Sandia's Ion Beam Laboratory. The blue light in the cylinder in the background above the computer screen is phosphor luminescing from proton beams hitting it. (Photo by Randy Montoya) Click on the thumbnail for a high-resolution image

Reactor operators need advanced cladding materials, which are the alloys that create the outer layer of nuclear fuel rods to keep them separate from the cooling fluid. Better alloys will be less likely to deteriorate from exposure to everything from coolant fluids to radiation damage.

Operating a reactor causes progressive microstructural changes in the alloys used in cladding, and that can hurt the materials’ integrity. However, present-day methods of evaluating materials can take decades.

The IBL, which replaced an earlier facility dating from the 1970s, has been in operation for about a year and is doing in situ ion irradiation experiments, potentially shaving years off testing. The ion beams use various refractory elements to simulate different types of damage and thus predict the lifetimes of advanced reactor claddings. Some of the research was highlighted in a presentation by materials scientist Khalid Hattar in December at the Materials Research Society conference in Boston in a paper co-authored by Tom Buchheit, Shreyas Rajasekhara and B.G. Clark.

Researchers, trying to understand the changes as a function of radiation dose, inserted a beamline from the tandem accelerator, the IBL’s largest, into a transmission electron microscope (TEM). This allows them to do in situ ion irradiation experiments at the nanoscale and record results rapidly and in real time. Sandia’s lab is one of only two facilities in the U.S. and one of only about 10 in the world that can do this, Hattar said.

“The idea is to come up with new ways to make different alloy compositions and different materials for next-generation reactors and to understand the materials used in the current-generation reactors,” he said. “Then we can find ways of doing a combination of TEM characterization as well as small-scale mechanical property testing in this rapid testing scenario to screen these materials and see which ones are the most suitable.” 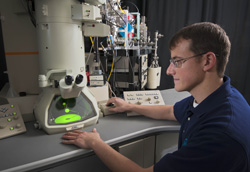 Materials scientist Khalid Hattar sits in front of the in situ ion irradiation TEM. The green light is electrons hitting phosphor. (Photo by Randy Montoya) Click on the thumbnail for a high-resolution image

To that aim, Hattar and his team are using the IBL’s capabilities to try to gain a fundamental understanding of how the materials evolve in extreme environments at the nanoscale. They hope that understanding can then be related to events on the macroscale.

Take, for example, something familiar like rust on a little red wagon.

“If you look at rust, it’s nonuniform,” Hattar said. “So the location where that first rust starts to occur must be related to some heterogeneous aspect of the microstructure. If we can really understand on the nanoscale what causes it, that initiating factor, then we can prevent the initiation, and without the initiation, you’ll never have that rust formation.”

The team developed a system for testing cladding materials that Hattar believes can be used for experiments under extreme conditions to simulate real-life environments. Researchers can work with temperatures up to 1,200 degrees C (2,192 degrees F) and pressure up to one atmosphere as well as ion irradiation to gain basic understanding of radiation damage.

A recently completed Laboratory Directed Research & Development (LDRD) program worked with a variety of samples, everything from high-purity, single-crystal copper to materials used in today’s reactors. The team found that under the right conditions, a combinatorial approach can be used with new alloy compositions produced in-house, Hattar said.

The LDRD project demonstrated a fundamental physics simulation of what’s happening to the material. In the next step, Hattar has suggested Idaho National Laboratory expose selected materials to neutrons and then try them out in a real reactor. Since the IBL can run experiments in as little as a day, researchers aim to pinpoint the best material so the Idaho lab, whose tests take much longer, won’t waste time testing poorer materials, he said.

In one experiment, the team examined both the composition of and effects of radiation on an alloy being considered for the next generation of reactors, seeking the best composition for different radiation exposures.

That idea prompted the test in which the team connected the large tandem accelerator to the TEM. The tandem accelerator produces the radiation that is sent into the microscope, allowing team members to watch as they irradiate materials. The TEM setup achieves nanometer-scale resolution with results recorded in real time.

In the next generation of testing, the team will have the option of using the beam from a Colutron accelerator recently added to the IBL system.

“This will allow us to do irradiation with both the heavy ions for displacement damage as well as a helium-deuterium combination for understanding hydrogen embrittlement and swelling of the cladding materials,” Hattar said.

Once researchers understand those mechanisms, they can go about selecting the proper material for a wide variety of extreme environments where radiation plays a significant role, such as shielding microelectronics from radiation from space.

The in situ ion irradiation TEM includes two new stages that give the IBL even more unique capabilities. A microfluidic stage allows researchers to look at fluids inside the microscope in real time, and a vapor phase environmental cell can be used to study how corrosion occurs as a function of time. The vapor phase studies were made possible by B.G. Clark and Brad Boyce with Basic Energy Sciences funding. The microfluidic stage was supported by Readiness in Technical Base and Facilities, an NNSA program.

Hattar said the team is planning basic science applications to study fundamentals such as oxidation mechanisms in materials, as well as gas phase flow experiments to look at the effects of hydrogen or corrosive gases on samples. The system also can do tomography, which enables the researchers to turn 2-D TEM projection images into full 3-D reconstructions. This results in visualization of the sample from all angles simply by compiling 2-D images taken at a range of sample tilts.

IBL researchers hope to provide fundamental insights into a variety of projects, both at Sandia and externally, that are interested in everything from corrosion to radiation damage to materials, Hattar said.

Experiments, however, are in the early stages because the facility is so new.

“We’re sitting in a situation where we’re just trying to see where they’ll lead right now,” Hattar said. “It should be fun and there should be lots of different directions.”