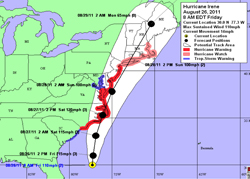 The Department of Homeland Security's National Infrastructure Simulation and Analysis Center, housed at Sandia and Los Alamos national laboratories, provided timely analysis of the likely impact of Hurricane Irene on infrastructure in August 2011. (Graphic courtesy of the National Oceanic and Atmospheric Administration) Click on the thumbnail for a high-resolution image.

ALBUQUERQUE, N.M. — Sandia National Laboratories is expecting the unexpected to help the nation prepare for severe weather and figure out the best ways to lessen the havoc hurricanes and other disasters leave on power grids, bridges, roads and everything else in their path.

“I think our work in critical infrastructure protection is a really great thing to be working on,” said Marianne Walck, director of Geoscience Climate and Consequence Effects. She said Sandia can give policymakers the understanding and information they need to make decisions that lead to systems that are better able to absorb impacts and recover quickly, so-called resilient infrastructure.

Walck was part of a panel at the recent American Geophysical Union’s inaugural Science Policy Conference that highlighted geoscience insights for the economy, public safety and national security. She discussed how Sandia is developing ways to assess the resiliency of the nation’s infrastructure and provide the knowledge officials need to create more resilient systems.

Efforts to analyze natural disasters and other threats grew out of Sandia’s strengths in systems engineering and complex systems analysis, Walck said. Some of the work is done through the National Infrastructure Simulation and Analysis Center (NISAC), a Department of Homeland Security (DHS) program jointly housed at Sandia and Los Alamos national laboratories. NISAC models and analyzes critical infrastructure, including how interdependent and vulnerable systems may be and the consequences of having them disrupted.

“Given how much of our national and economic security rests on the resiliency of our infrastructure, the rational choice for policymakers is to experiment with models, not the system,” said Lori Parrott,  manager of Policy and Decision Support Analytics and the NISAC program for Sandia.

Parrott, who was not part of the panel, said Sandia can better quantify the results of such resiliency studies by taking a mathematically rigorous approach to objective assessments. Sandia has developed high-fidelity computer models of individual infrastructure elements as well as generic network models and dynamic simulations. It’s part of critical infrastructure protection programs funded by the Department of Energy (DOE), DHS, Sandia’s Laboratory Directed Research and Development program and such agencies as DHS’s Federal Emergency Management Agency (FEMA).

Researchers do a risk analysis and quantify uncertainties. They look at interdependencies among systems and supply chains, the resilience of various systems, how infrastructure systems fail, cascading effects and how results might differ if a series of disasters hits instead of just one.

Walck said in an interview before the Science Policy Conference that good models allow analysts to quantify consequences of disruptions in very complex systems. “If you don’t have a good model to look at or to exercise in terms of running through these various scenarios, you may not understand what could really happen,” she said.

A flood, for example, could damage roads, collapse bridges and take down power lines, so officials have to decide what to rebuild first, how best to rebuild and how much that will cost, she said.

“This isn’t just saying, ‘Oh, I think that hurricane is going to knock out this particular chemical plant.’ You have to think about what that means in terms of getting critical chemicals to industries. What societal or economic effects will result if this particular product isn’t supplied? There are lots of different interactions that go on,” Walck said. “It’s just illuminating to understand what the impacts are if you’ve got particular types of infrastructure.”

Analytic information can better inform policymakers so they can decide how to craft policies, how to promote incentives to create resilient infrastructure or how to prioritize recovery and restoration, Parrott said.

Each year, NISAC undertakes projects analyzing various risks. Given a particular disaster, how could people be evacuated along the roads? How much damage would hurricane-force winds cause to power lines, and would that cause governments to consider requiring underground lines in the future? Then there are rebuilding considerations. Would it be better, for example, to focus on repairing rail transportation routes in a particular area rather than trying to repair all routes simultaneously?

NISAC has worked on a number of hurricanes, including Hurricane Irene, the only one to threaten the U.S. mainland last year. Although small compared to other hurricanes, Irene was unusual. Rather than striking a concentrated area, Irene traveled up the East Coast, threatening a large swath of significant infrastructure.

Officials asked NISAC to analyze Irene’s likely impacts while the storm moved toward shore and to deliver an analysis in less than 12 hours. NISAC came through, and its analysis was used to brief FEMA and first responders, as well as the DHS and DOE, Walck said.