ALBUQUERQUE, N.M. — When an Army Special Forces officer-turned-engineer puts his mind to designing a military riflescope, he doesn’t forget the importance of creating something for the soldiers who will carry it that is easy to use, extremely accurate, light-weight and has long-lasting battery power. 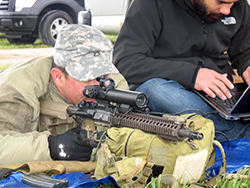 Sandia National Laboratories optical engineer Brett Bagwell led the development of the adaptive zoom riflescope prototype. At the push of a button, the riflescope can toggle between high and low magnifications, enabling soldiers to zoom in without having to remove their eyes from their targets or their hands from their rifles.

“The impetus behind the idea of push-button zoom is you can acquire what you’re interested in at low magnification and, without getting lost, zoom in for more clarity,” Bagwell said.

In addition to military riflescopes, the riflescope  technologies are now being considered for other applications where speed, size, weight and power count. Applications include medical imaging, binoculars for the entire range of users from the military to birdwatchers, hunters’ scopes and cell phone cameras where optical zoom is needed to avoid the pixelated images associated with digital zoom.

Adaptive zoom is Sandia’s answer to DoD call for riflescope

Bagwell began work on the adaptive zoom riflescope in 2006 responding to Department of Defense interest in a compact zoom riflescope that could rapidly toggle between magnifications. Early work had been funded by Sandia’s Laboratory Directed Research and Development program.

Bagwell found no commercial products or components that would enable the riflescope to meet military requirements, so he had to design and build the first prototype from scratch and develop a manufacturing process.

The prototype uses a patented active optical zoom system, called “adaptive zoom,” invented by David Wick, who was working as a Sandia optical engineer at the time.

Traditional optical zoom changes magnification by adjusting the positions of the lenses along the optical axis. For example, a 35-mm camera mechanically moves the lenses as you zoom in on or out from a subject.

Adaptive zoom changes the focal lengths of two or more lenses by varying the curvature of the lenses’ surfaces to provide optical zoom without changing their overall positions relative to one another, allowing the user to view either a wide-angle image or zoom in on an area of interest with a compact, low-power system, Wick said.

The invention, Bagwell said, means “this is the first time in a long time that there has been a new technology that a direct-view optical designer can take advantage of.”

Variable optical lenses were first developed in the late 1800s, but had few applications because of the limitations of materials. Adaptive zoom accomplishes true optical zoom (as opposed to digital zoom) by changing the focal length of two or more lenses in concert, without the normal mechanical motion, reducing the size and power requirements of the zoom lens, Wick said.

The theory that underlies zoom scopes hadn’t changed significantly since the 1960s, until the adaptive zoom technology came along. Using adaptive zoom, Sandia’s team worked for 18 months to achieve an optical quality of about half a wavelength of light.

Sandia had to perfect the manufacturing process of the lenses so the quality of the prototype could be replicated. When the polymer is sealed, no air bubbles or specks of dust could remain in the lenses or on the surrounding rings, Bagwell said.

Freddie Santiago, who at the time was a doctoral candidate in physics and in Sandia’s Student Internship Program, developed the process for making the lenses.

“You have to start from the basics: How do we make the polymer? How do we stretch the polymer and make it an optical surface? We had to understand the process, from mixing the polymer all the way to the final product and we had to do it in a systematic way,” Santiago said.

While many of the technologies and designs that make up the riflescope came from mechanical engineers, robotics experts, chemists and other Sandia experts, Bagwell went outside the labs for the actuator to flex the lenses, seeking help from Dynamic Structures and Materials, LLC, a small business in Franklin, Tennessee.

Matthew Stefanick, who was the company’s lead engineer on the project, said the team used an ultrasonic piezo motor to actuate the flex in the lenses. A voltage is applied at an ultrasonic frequency to vibrate and move a rotor and lead screw, which causes the lens to flex.

Stefanick said the decision to use an ultrasonic motor provided a key feature, a “zero-power hold” that maintains the last selected focus, even if the power is lost.

The feature allows users to complete 10,000 actuations on the equivalent of two AA batteries, Bagwell said.

Meeting the power usage, speed and accuracy specifications required by the military took years. “As an engineer, I was impressed with our progress,” Bagwell said. “But as an operator, I was constantly dissatisfied. We had to make it smaller. We had to make it lighter. It’s got to toggle faster.”

Ex-sergeant says riflescope could save lives

From 2010-2012, the team also ensured the riflescope would be reliable in the field by conducting shock, vibration and temperature testing, Bagwell said.

By 2010, Bagwell began demonstrating it to the military and, in late 2012, tested it with representatives from U.S. Special Operations Command at Camp Atterbury Joint Maneuver Training Center near Edinburgh, Indiana. When he handed the rifles to military personnel to let them test them, he realized that Sandia had developed a concept that would benefit the military.

“The guys picked it up and when they pushed the button and it zoomed, and then instantly it zoomed back out, they were like kids at Christmas. There was this look of astonishment and pleasure,” he said. “That’s very gratifying. Here’s this grizzled veteran looking at me like I’ve just created magic.”

Michael Squire, then a sergeant first class with Special Operations Research Support Element, said the ability to zoom between near and far targets within seconds, without taking his hand off the weapon, is “game-changing.”

“The difference that can make, especially with somebody shooting back, could mean life or death,” he said.

Feedback from ex-military personnel and soldiers who have tried the adaptive zoom riflescope has motivated Bagwell. He is now working to develop night vision systems and recently demonstrated adaptive zoom in thermal infrared.

“It’s an opportunity for me to take my technical expertise and give back to people I really care about,” he said.