ALBUQUERQUE, N.M. – Sandia National Laboratories has developed a cost-effective robotic hand that can be used in disarming improvised explosive devices, or IEDs. 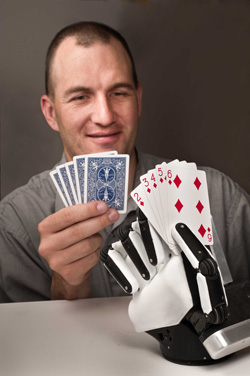 Principal investigator Curt Salisbury developed an affordable robotic hand that is dexterous enough to mimic the capabilities of the human hand. (Photo by Randy Montoya) Click on the thumbnail for a high-resolution image.

The Sandia Hand addresses challenges that have prevented widespread adoption of other robotic hands, such as cost, durability, dexterity and modularity.

“Current iterations of robotic hands can cost more than $250,000. We need the flexibility and capability of a robotic hand to save human lives, and it needs to be priced for wide distribution to troops,” said Sandia senior manager Philip Heermann.

The Sandia Hand project is funded by the Defense Advanced Research Projects Agency.

Principal investigator Curt Salisbury said the goal was to build a capable but affordable robotic system.

“Hands are considered the most difficult part of the robotic system, and are also the least available due to the need for high dexterity at a low cost,” Salisbury said.

The Sandia Hand is modular, so different types of fingers can be attached with magnets and quickly plugged into the hand frame. The operator has the flexibility to quickly and easily attach additional fingers or other tools, such as flashlights, screwdrivers or cameras. Modularity also gives the Sandia Hand a unique durability. The fingers are designed to fall off should the operator accidentally run the hand into a wall or another object.

“Rather than breaking the hand, this configuration allows the user to recover very quickly, and fingers can easily be put back in their sockets,” Salisbury said. “In addition, if a finger pops off, the robot can actually pick it up with the remaining fingers, move into position and resocket the finger by itself.”

The operator controls the robot with a glove, and the lifelike design allows even first-time users to manipulate the robot easily. The robot’s tough outer skin covers a gel-like layer to mimic human tissue, giving the Sandia Hand the additional advantage of securely grabbing and manipulating objects, like a human hand.

Using Sandia’s robotic hand to disable IEDs also might lead investigators to the bomb makers themselves. Often, bombs are disarmed simply by blowing them up. While effective, that destroys evidence and presents a challenge to investigators trying to catch the bomb maker. A robotic hand that can handle the delicate disarming operation while preserving the evidence could lead to more arrests, and fewer bombs. 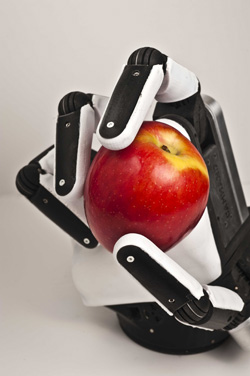 The Sandia Hand addresses challenges that have prevented widespread adoption of other robotic hands, including cost, durability, dexterity and modularity. (Photo by Randy Montoya) Click on the thumbnail for a high-resolution image.

Sandia partnered with researchers at Stanford University to develop the hardware and worked with consulting firm LUNAR to drive costs down drastically. In current commercially available robotic hands, each independently actuated degree of freedom costs roughly $10,000.

“The Sandia Hand has 12 degrees of freedom, and is estimated to retail for about $800 per degree of freedom — $10,000 total — in low-volume production. This 90 percent cost reduction is really a breakthrough,” said Salisbury. Additionally, because much of the technology resides in the individual finger modules, hands with custom numbers and arrangements of fingers will be quite affordable.

“At this price point, the Sandia Hand has the potential to be a disruptive technology,” added Heermann. “Computers, calculators and cell phones became part of daily life and drastically changed how we do things when the price became affordable. This hand has the same potential, especially given that high-volume production can further reduce the cost.”

DARPA is funding a separate software effort in a parallel track to the hardware work.